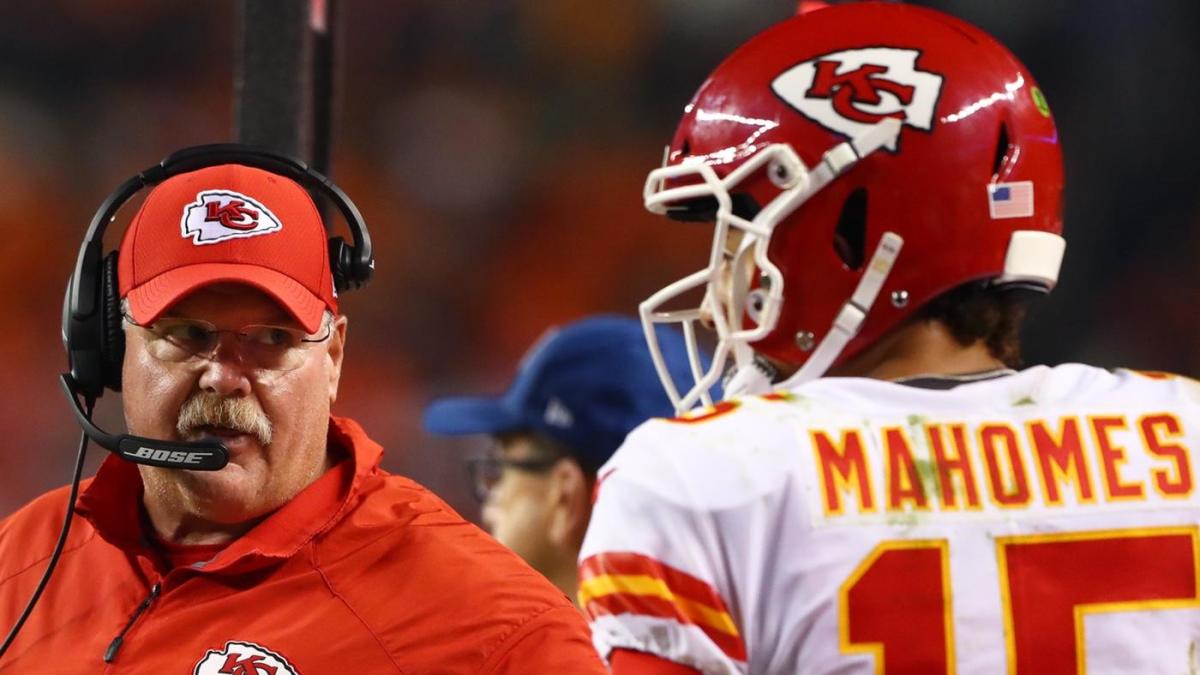 After falling short in the AFC Championship game last year, the Kansas City Chiefs are officially headed to the Super Bowl.

The Chiefs haven’t been to the Super Bowl in 50 years, and head coach Andy Reid hasn’t been to the Big Game since way back in 2004. Back then, Donovan McNabb was his quarterback, Terrell Owens was still happily a Philadelphia Eagle and Tom Brady was only two Lombardi Trophies into his career. But there might not be a better opportunity for Big Red to get that ever-elusive ring than this year, with reigning MVP Patrick Mahomes on his side — who is putting up incredible numbers this postseason.

The Chiefs trailed in both playoff games this year by double digits, yet rebounded to win both contests by double digits. Thanks to the Chiefs’ powerful offense, Kansas City is now the favorite to win it all.

Can they actually bring the trophy home? We’ll find out soon enough. First, let’s rewind and see how Reid and the Chiefs got here in the first place, taking a look at the roster moves and in-season victories that influenced their journey the most:

Mahomes is obviously the centerpiece of all the Chiefs do, somehow making a 4,000-yard season with a 105.3 passer rating look just “good” after his breakout of 2018, then turning in a playoff run that’s rivaled some of the best in recent memory. But he and other familiar weapons, like Travis Kelce and Tyreek Hill, got some serious support from the club’s crop of 2019 additions.

Clark is the biggest name of the bunch, and his presence has certainly helped offset injuries to interior studs like Chris Jones. Credited with three sacks in K.C.’s Divisional rout alone, he added eight sacks and three forced fumbles during the regular season. Breeland and Wilson, meanwhile, have quietly had steadily productive seasons after coming in as lower-tier pickups, while the team’s top two rookies — Hardman and Thornhill — couldn’t have had a better start to their careers. The former has flashed as a big-play threat in relief of or alongside Hill, putting the cherry on the Chiefs’ offensive sundae, while Thornhill has been sturdy when healthy at the back end of the secondary opposite the versatile Mathieu.

It’s easy to forget now that Matt Moore actually helped the Chiefs stay afloat during Mahomes’ two-game absence, which initially looked as if it might be a lot longer thanks to the QB’s scary knee injury, but the moment things finally clicked for Reid’s squad might have come — funny enough — after Ryan Tannehill, Derrick Henry and Mike Vrabel’s scrappy Titans upset K.C. in their first meeting of the year.

After starting the season 4-0, the Chiefs didn’t win back-to-back games for more than two months, slipping up in two straight home games and nearly falling to the Minnesota Vikings during a 2-4 stretch from October to November. Then the Titans happened. Tennessee’s inspiring victory spoiled Mahomes’ anticipated return, dropped the Chiefs to 6-4 and gave new life to Kansas City’s AFC West rivals — but it also lit a fire under Reid’s team.

The Chiefs weren’t perfect in their follow-up, a 24-17 defeat of the Los Angeles Chargers, but considering the “W” came on the road in Mexico City (and without Hill for much of the game), it was a clutch performance. It was also the start of a winning streak that’s still intact. Since coming off their Week 12 bye, the Chiefs haven’t lost, racking up four 20-point routs along the way. So while Week 10 may have been reason to fear the Titans in the AFC title game, it also marks the last time K.C. didn’t look like a pristine Super Bowl contender.

It might not be surprising, in retrospect, that the Chiefs were able to knock off the Patriots this season. But consider the circumstances at the time: New England was fresh off an upset loss to the Houston Texans, primed to rebound in typical Bill Belichick/Tom Brady fashion. The Pats defense was still playing like one of the best in the league. They were in Foxborough. They were less than a year removed from beating the Chiefs in Arrowhead to advance to the Super Bowl.

Didn’t matter. The Chiefs went on the road, and they earned a statement win. Not only did it give them another tick in the AFC “W” column, avenge the title-game loss and allow Mahomes to stand out in one of his first big tests since returning from injury, but it confirmed they weren’t going to bow to the bright lights or the big stage. They put one of the NFL‘s best defenses to bed, boosted their morale in the process, and coasted the rest of the way for a 12-4 finish and first-round bye.

Now that the Chiefs are in the Big Game, how do they match up with the San Francisco 49ers, who had no trouble disposing of the Green Bay Packers in the NFC Championship? Keep it locked right here at CBS Sports for tons of Super Bowl LIV coverage, including in-depth previews and predictions.