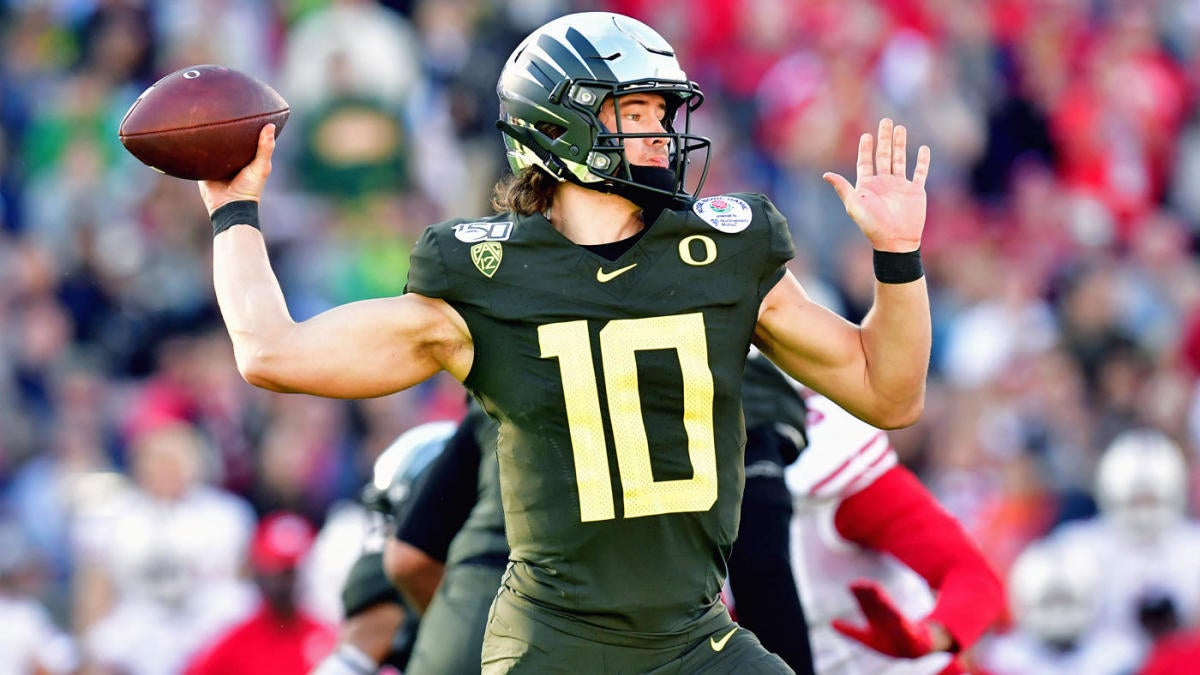 MOBILE, Ala. — The NFL is a quarterback-driven league. This is not news, of course, but it also means that teams in desperate need of a franchise passer are always on the lookout for the next big thing.

At this point it’s all but certain that Joe Burrow will be headed to the Bengals with the No. 1 overall pick but after that, a lot will be decided between now and late April. Which brings us to the Senior Bowl, where the sun set on the first day of practices Tuesday as six quarterbacks took part in the first leg of their draft journey. Justin Herbert, Jordan Love, Jalen Hurts, Anthony Gordon, Shea Patterson and Steven Montez were all on the field for the inaugural practice and the results were mixed.

That’s to be expected; everything’s news from the surroundings to teammates to the coaching staff (the Lions and Bengals’ staff are tasked with coaching the North and South squads, respectively). That’s part of the evaluation process; how do these quarterbacks cope with the unfamiliar? And more importantly, how long does it take them to get comfortable? Because while it’s common for the first day of practices to feature a lot of sloppy football, the expectation is that everything is tighter, crisper and more efficient on Wednesday and Thursday.

With that in mind, here’s what we saw on a clear, cold and windy Tuesday afternoon at Ladd-Peebles Stadium.

We’ve been saying it since 2018, Herbert’s junior season at Oregon: He looks like an NFL quarterback. He’s 6-foot-6, has the best arm in this draft class, is insanely athletic for someone his size, and if you were to build The Perfect Quarterback in a lab, it would be Herbert. But — and there’s always a but — the knock on Herbert has been his consistency. We’ve wrote about it weekly during the fall.

Sure, there was the five-touchdown performances against Montana and the 79.1 completion percentage against Stanford back in September, but Herbert faced virtually no pressure against the Grizzlies and one-fifth of his throws have been screen passes, which help account for the uptick in his completion percentage. There were also the head-scratching efforts against Washington and Arizona State.

Many of Herbert’s throws at Oregon were some variety of screens, and to his credit, he was typically accurate in those situations. But once you get 15-plus yards down the field, the consistency waned and he wasn’t in the same conversation with Burrow or Tua Tagovailoa. Granted, he also didn’t have the same receivers, and that’s part of what NFL evaluators will have to figure out.

We asked Herbert on Tuesday before practice what teams told him they wanted to see this week. There was no mention of more consistency on his intermediate and deep throws, or better footwork and mechanics. Instead, Herbert offered one word: “Leadership.”

Teams want to see Herbert command a huddle and lead on the field. Because it’s not the occasional errant throw that concerns scouts and general managers as much as it’s the perception that Herbert doesn’t have the ability to lead his team.

“I think people are worried about leadership and me being a pretty quiet guy,” Herbert told reporters during his press conference. “But I would say that I’m not too quiet. Unfortunately, I’ll talk your ear off. There are these things that I want to be transparent with and give a good representation of myself. …

“I’m not an introvert. I think that’s one of the things that I don’t think people have the right idea about me and I would say that it’s not fairly accurate and when I get into the huddle, when I get around the team it’s a little bit different and the guys would say that, the coaches would say that and I think they’d agree with me on that.

“I think I’m somewhere in the middle (of introvert and extrovert) and there’s shades of both in me. That’s something I’ve really worked on and the coaches have done a great job of pulling that out of me.”

Not surprisingly, Herbert’s physically talents shone on Day 1 of Senior Bowl practices, and it was hard to discern how much leading he was doing during drills. But the ball exploded out of his hand, almost always found its intended target and he looked every bit the first-round talent. It’s a good start to the week for a player who came to Mobile with plenty of questions.

Like Herbert, Love is an unbelievable talent. And while Herbert’s numbers improved from 2018 to 2019, Love’s 2019 campaign can kindly be described as forgettable. It wasn’t all on him; he had a new coaching staff, a new offensive line and was throwing to mostly new receivers. The results, in some ways, were predictable. But Love isn’t looking to assign blame; he was the unquestioned leader of the Aggies and he took full responsibility for how last season unfolded.

Love told CBSSports.com that he tried to do too much at times and the results led to a lot of uneven play; he finished with just 20 touchdowns and 17 interceptions a year after throwing 32 touchdowns against just six interceptions.

“You gotta push the ball downfield to make those big throws, but also be smart with it,” Love said during his press conference before his first Senior Bowl practice. “I’ve learned a lot. Every interception, for me, that’s a learning moment. Obviously I had 16 learning moments last season. It’s something you can go back and watch film on and learn from.”

So what will an NFL team get in Love, whose physical abilities, arm strength and playmaking abilities have drawn comparisons to Patrick Mahomes?

“Both (of us) have strong arms,” Love said of Mahomes, via NFL.com. “He obviously can make some ridiculous throws, off-schedule (throws) and stuff like that. It’s something I’ve seen and tried out with my game, being able to make throws like that. I hope to be on the same platform as him.”

At various points during 2019 we saw glimpses of what makes Love so intriguing, starting with his arm strength, and he shows the ability to let it go before the receiver is out of his break, something that will be imperative at the next level. But when Love doesn’t get his feet set, or throws off-balance, his accuracy suffers. And this isn’t to say Love can’t throw on the run — because he can — but when he rushes, usually because he’s under pressure, the results have been mixed.

But there’s still so much to like. Love trusts his arm, even in the face of a heavy pass rush, because he knows he can snap one off to an outlet receiver at the last second. And that arm also allows him to fit the ball in tight spaces, which is especially evident when he’s on time with his delivery.

Love had a good showing on Day 1 in Mobile, and much like Herbert, his physical attributes were clear and obvious from his first snap. Now the challenge becomes maintaining that level of play. Love entered the season as a first-round sleeper, got lost in the mix in the middle of an abysmal junior campaign, and again has a chance to redeem himself — right back into Round 1 — with a strong pre-draft season, starting with Senior Bowl Week.