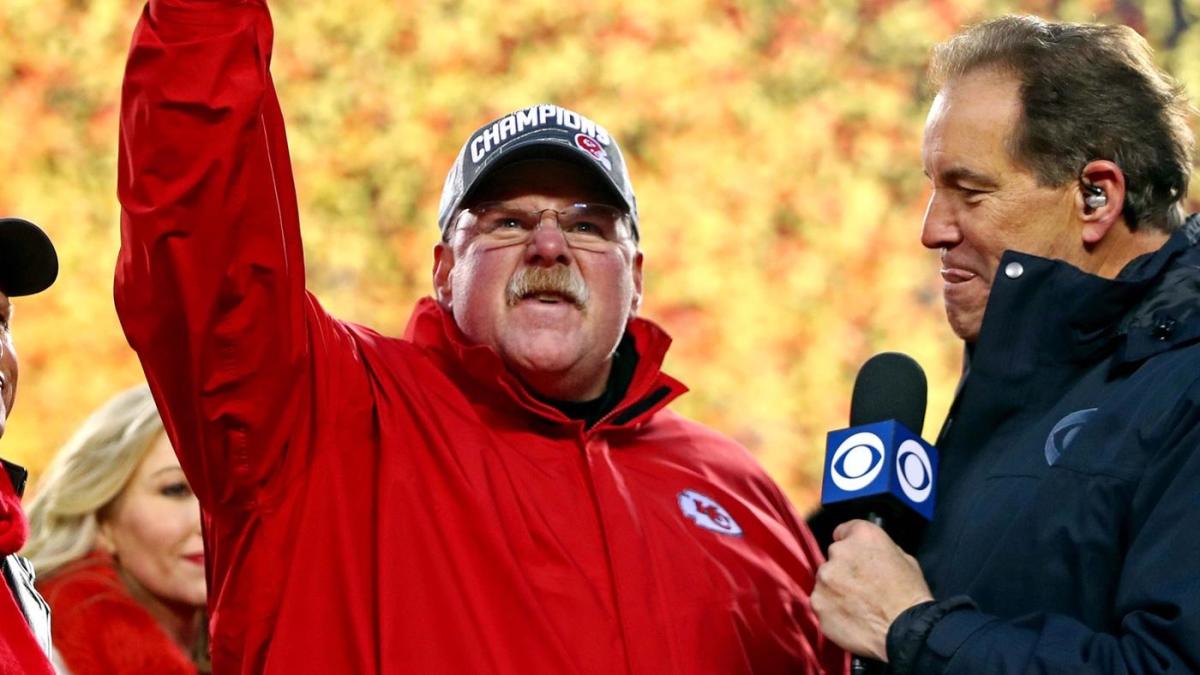 After earning his second trip to the Super Bowl as a head coach, Andy Reid enjoyed a relatively low key celebration following the Chiefs‘ 35-24 win over the Titans in the AFC Championship game. Reid, speaking to reporters less than 24 hours after Kansas City erased a 10-point deficit, was asked how he celebrated the historic win. That’s when he delivered the most Andy Reid-like answer we could’ve expected.

“I had a cheeseburger and went to bed,” said Reid, whose comment immediately went viral on social media.

Reid’s celebration, however, didn’t last long. Hours after his team punched its first Super Bowl ticket in 50 years, Reid said that the Chiefs were back in the office on Monday preparing for their next opponent —  the 49ers. San Francisco jumped out to a 27-0 halftime lead before defeating the Packers in the NFC title game, 37-20.

“I know they’re a good, solid football team,” Reid said when asked to give his initial thoughts on the 49ers, who clinched their first Super Bowl berth since 2012. “They play hard and aggressive. You saw that last night playing against a good Green Bay team. They do a variety of things on both sides of the ball. They can run it, they can pass it on the offensive side. On defense, they’ve got a variety of things that they throw at you. Solid on special teams, so, it’s all and all a good football team. It’s well coached. Very well coached.”

Specifically, Reid was asked about San Francisco running back Raheem Mostert, who rushed for a franchise record 220 yards and four touchdowns in the 49ers’ win over the Packers.

“He did have a career day yesterday,” Reid said of Mostert, a former undrafted rookie who bounced around several other teams before joining the 49ers. “He ran like crazy. We’ll have to get down and study him, having the blocking schemes down. Our guys will do that, they’ll bear down. They also have a good quarterback than can throw to good receivers and an All-Pro tight end. There’s a lot of variables to that offense that they can use different weapons. Our guys, they’ll spend the time going over all of that and studying that.”

While he quickly got to work on studying the 49ers, Reid said he was also able to respond to the slew of well-wishers that reached out after Sunday’s win. Reid said that the well-wishes included several former and current NFL coaches.

“Just before I got here, I answered every one of them,” said Reid, who is in the midst of his 21st season as an NFL head coach. “I had quite a few text messages, but I appreciated every one of them. It’s a small fraternity, and a great fraternity. We’re all trying to do what’s best for this league because of the way we’re treated.”

Reid, who led the Eagles to a Super Bowl berth in 2004, was asked to compare his current team to that Philadelphia squad. After three consecutive NFC title game losses, Reid’s ’04 team kicked down the door, defeating Michael Vick’s Falcons while earning the Eagles’ first Super Bowl berth in twenty-four years.

“I had great leaders on that team,” Reid said of his ’04 Eagles squad that included Hall of Famers in Brian Dawkins and Terrell Owens along with perennial Pro Bowl quarterback, Donovan McNabb. “I was fortunate that way, and I feel like I’ve got future Hall of Famers on this team here, and Hall of Fame leaders too, and there’s a difference. Got some real good leaders on this team. Similarities are also (having) good players. I’ve been blessed that way as a head coach.”

Speaking of leaders, Reid was asked to describe the intangibles that have made Chiefs’ quarterback Patrick Mahomes one of the NFL’s best players — and biggest stars — since becoming the team’s starter in 2018.

“He’s great to be around everyday, because he brings great energy every day,” Reid said of Mahomes, who will become just the third quarterback in history to start a Super Bowl before turning 25. “You respect that because everybody’s got their ups and downs because there’s life outside of football. When he’s in that building, it’s all football, it’s all team. He’s never given a ‘It’s about me.’ I’ve never heard that from him. It’s all 100% about the team: ‘How we’re doing, what we can do better, how can I help?’ And then (he) buckles down to get the game plan down. He studies. For young guys out there, what a great example that is about hard work.

“He’s a special kid. This city’s lucky to have him. It’s a nice match. Great fans and a great quarterback like that.”

Kansas City is also lucky to have Reid, who is looking to join the legendary Hank Stram as the only Chiefs coaches to hoist the Lombardi Trophy.