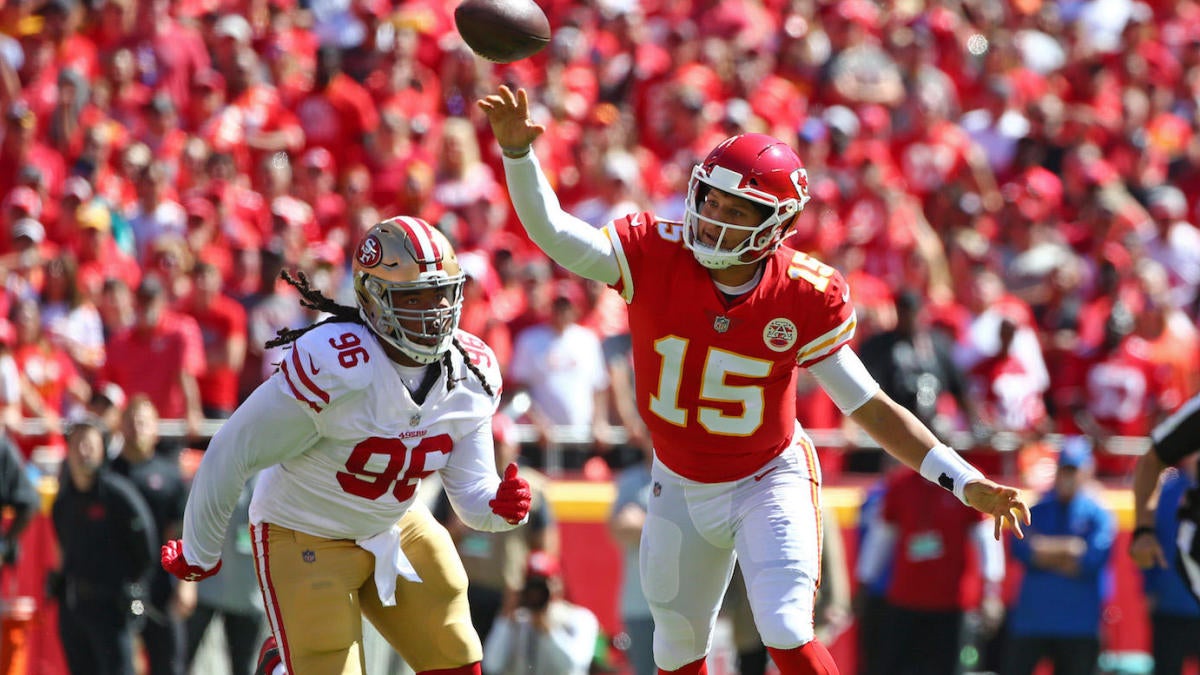 The matchup for Super Bowl LIV is set, and it’ll be the Kansas City Chiefs taking on the San Francisco 49ers with a Lombardi Trophy up for grabs in Miami on Feb. 2.

This is the first time in 50 years that the Chiefs have been able to reach the Super Bowl, and they’re looking to win their first title since 1969. As for the 49ers, their latest Super Bowl appearance came back in 2012, but their last championship was back in 1994, so both clubs are trying to snap rather substantial droughts.

This matchup will naturally be picked apart and dissected thoroughly over the next two weeks, but below you’ll see a quick preview of what’s to come in Super Bowl LIV. You’ll also see the latest odds and get some early leans from our friends at the Pick Six Podcast.

Similar to the divisional round, the Chiefs found themselves down early to the Tennessee Titans. The lead grew to as high as 17-7 in the second quarter, but Patrick Mahomes and company were once again able to surge back, scoring 28 unanswered points to pull away and stamp their ticket to Super Bowl LIV.

Mahomes flashed his brilliance with both his arm (294 yards passing and three touchdowns) and his legs (53 yards rushing and a touchdown). Kansas City was also able to slow down Titans running back Derrick Henry, who was on a historic pace heading into this matchup. He rushed for just 69 yards in the game, with only seven yards coming in the second half.

For a more detailed breakdown of that game, check out our takeaways piece here.

The 49ers built up an early lead that really set themselves up for success. They dropped 27 unanswered points to start the game and held Green Bay scoreless in the first half. Even as the Packers were able to make it a more competitive game in the second half by scoring 13 points in the fourth quarter, that earlier run by San Francisco was enough to lock up the NFC Championship.

A large part of the Niners success came through the running game as Raheem Mostert went crazy and rushed for 220 yards and four touchdowns in the win. Thanks to that success on the ground, quarterback Jimmy Garoppolo wasn’t called upon to do much and only dropped back to pass eight times while completing six of those throws for 77 yards.

For a larger breakdown of this game, here’s the link to our key takeaways from the NFC Championship.

The Kansas City Chiefs are the slight favorites to win Super Bowl LIV as they are surrendering 1.5 points on the opening line. This is essentially a pick ’em at this point and some sportsbooks opened it as such, but it’ll certainly be interesting to see how much this line moves as the weeks progress. Both of these teams do have the ability to put up points in a hurry, so that 52.5 over/under total is also pretty intriguing. For what it’s worth, both the AFC and NFC Championship games hit the over. As we look at the moneyline for this game, it’s 49ers +105 and Chiefs -125.

What to expect in 49ers-Chiefs

The last time the Chiefs and 49ers went head-to-head was back in Week 3 of the 2018 season. Most will remember that game as the contest where San Francisco quarterback Jimmy Garoppolo suffered a season-ending ACL injury on a scramble. The two quarterbacks did play well in that game as Garoppolo threw for over 250 yards and two touchdowns, while Patrick Mahomes went for 314 yards passing and three touchdowns.

Given their youth, both Garoppolo and Mahomes will likely take center stage leading up to the Super Bowl.

For Kansas City, they’ll be looking to once again slow down a strong rushing attack. After holding Titans star running back Derrick Henry to just 69 yards rushing in the AFC Championship, the Chiefs will now face a 49ers team that just rushed for 287 yards on seven yards a carry in the NFC Championship. Meanwhile, the 49ers will look to contain Mahomes in a similar fashion they did with Aaron Rodgers in the NFC Championship, particularly in the first half. Having Nick Bosa, Dee Ford and other pass rushers constantly attacking Mahomes will be critical to the Niners hoisting the Lombardi Trophy.

We have a Pick Six Podcast Super Friends sweep in their early picks for Super Bowl LIV as Will Brinson, Ryan Wilson, John Breech and Sean Wagner-McGough are all leaning towards choosing the Kansas City Chiefs to win it all. Of course, a lot can change between now and kickoff of the Super Bowl, but that’s where the fellas from the Pick Six Podcast are leaning as we wrap up Championship Sunday. For Ryan, John and Sean, they’re staying consistent with their preseason Super Bowl pick in Kansas City, so props to them for sniffing out that Super Bowl contender way back in the summer.