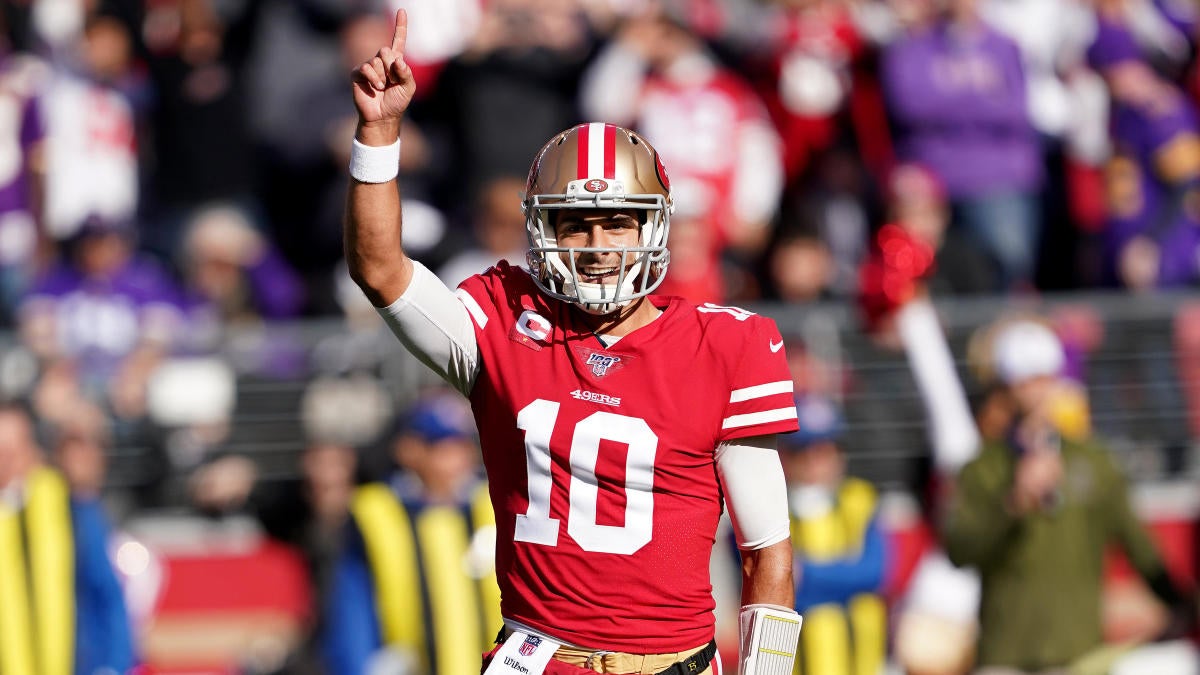 Just about eight weeks ago, the San Francisco 49ers and Green Bay Packers squared off in primetime. The 49ers won, and it wasn’t particularly close. Aaron Rodgers had one of the worst games of his career while George Kittle and Deebo Samuel and Raheem Mostert and Emmanuel Sanders and even Jeff Wilson beat the Packers’ defense for big plays.

A lot has changed for both teams since then. The Packers have yet to lose since that game, for instance, while the Niners recovered from losing two of their following three games to secure the No. 1 seed in the NFC and home field throughout the NFC playoffs, which is why they’ll play host to the Packers in Sunday’s rematch.

With a trip to the Super Bowl on the line, let’s break down the matchup, but first, here’s how you can track all of the action:

When the Packers have the ball

I wrote rather extensively about several of the matchups that will determine this game as part of our series exploring how each of the four remaining teams can win the Super Bowl. I was assigned to detail the path for the Packers, so we’re going to excerpt some portions of that piece in order to shed light on the matchups in this game.

Davante Adams is coming off a monster game. He racked up eight catches for 160 yards and two scores, torching poor Tre Flowers just about every time they got matched up. Three of Adams’ catches, totaling 74 yards and both of his scores, came against Flowers on the left side of the field.

If the Packers want to, they can move Adams around the formation once again on Sunday, the better to avoid Richard Sherman. The 49ers, like the Seahawks, play sides with their cornerbacks, which means Sherman will align on the offense’s right side on a near every-snap basis. Across from him with be either Ahkello Witherspoon — who was beaten for a deep touchdown by Stefon Diggs and then summarily benched — for Emmanuel Moseley, who manned the position while Witherspoon was out with an injury during the regular season, and then again after Witherspoon was benched last week. They can also move Adams into the slot, where he can battle K’Waun Williams rather than Sherman.

How the Packers choose to approach Sherman will be a window into how they plan to attack the defense as a whole. If they decide to sacrifice Allen Lazard or Marquez Valdes-Scantling or Geronimo Allison at his altar and let Adams work the left side of the field the entire game (as they did against the Seahawks back in 2014, when they lined up rookie-year Adams on Sherman so Jordy Nelson could work against Byron Maxwell), they’re likely going to force-feed Adams the ball because they’re not confident they can move the ball through the air otherwise. If they’re willing to let Adams go toe-to-toe with Sherman, it must be because there’s another matchup they like.

That said, whether or not they can find success through the air will also depend on which version of Rodgers shows up.

Sure, Rodgers had a 26-to-4 touchdown-to-interception ratio, but he completed only 62 percent of his passes, the second-lowest mark of his career; he finished second in the NFL with 39 throwaways; he averaged only 7.0 yards per attempt, far below the league average; he threw touchdowns far less often than usual (4.6 percent of his throws compared to a career average of 6.0 percent); he posted his worst passer rating in four years and the third-worst mark of his career; and he set a new career-low in QBR.

Rodgers had a couple monster games where he just absolutely smoked the opposition: he was 46 of 64 for 672 yards, nine touchdowns, and zero interceptions in blowout wins over the Raiders and Giants. But he was largely ordinary otherwise, and flat-out bad in several games as well.

Rodgers was able to do that last week almost exclusively when he was well-protected. According to Pro Football Focus, Rodgers was pressure on nine of his 30 dropbacks. On those plays, he was just 2 of 8 for 36 yards and one sack. On his remaining dropbacks, Rodgers went 14 of 19 for 207 yards and two scores.

Keeping Rodgers protected against the Seahawks’ pass rush is a far different task than doing the same against San Francisco’s fearsome rush. Nick Bosa finished the season sixth in the NFL in total pressures, per Pro Football Focus. Arik Armstead ranked 17th. DeForest Buckner ranked seventh among interior defenders. Dee Ford sat out several games so he doesn’t rank as highly, but his Pass Rushing Productivity rate at PFF was sixth-best among the 195 defenders who rushed the passer on at least 100 snaps. Rodgers does have an occasional tendency to hold onto the ball for too long, and he has to be careful not to indulge that impulse too often against this front.

The better way to beat the Niners this season, though, has been on the ground. The degree to which that’s true has been a bit exaggerated by a couple of big games when several important pieces were missing and you don’t have to look much further than the way they bottled up Dalvin Cook last week for evidence, but it’s still the case. Green Bay over the last several weeks has leaned more heavily on Aaron Jones as the feature back than ever before, and that’s a wise choice considering the talent and productivity gap between him and Jamaal Williams. The Green Bay offense is also at its best when Jones is heavily involved in the passing game, so getting him matched up on linebackers or safeties in open space should be in the game plan as well.

On the other side of the ball, we have to start with Green Bay’s defensive front.

Last week against Seattle, Za’Darius Smith and Preston Smith produced nearly identical stat lines: they each had two tackles, one of which went for a loss, plus two sacks and four quarterback hits. Za’Darius had 11 total pressures while Preston had seven, per Pro Football Focus, though part of that was due to the fact that Preston drops back in coverage far more often.

The way they dominated Seattle’s offensive line last week is what the Packers will need them to do against the 49ers… They’ll have some help up the middle from Kenny Clark, who had a pretty excellent season in his own right. Clark was one of the most underrated players in the NFL heading into this season, and all he did was have arguably the best year of his career.

Clark finished with six sacks and nine tackles for loss, and PFF credited him with 62 pressures — 17th-most in the NFL and second among interior defenders, behind only Aaron Donald. They were also the only two players who primarily lined up inside that finished the year with 50-plus hurries. Clark, too, was excellent last week, notching a sack, a hit, and a tackle for loss among his four total tackles.

This group absolutely dominated the Seahawks in the divisional round, completely shutting down the Seattle run game and keeping Russell Wilson under pressure all afternoon. The 49ers have a far better offensive line than the Seahawks, and Kyle Shanahan is far more creative when it comes to scheming his players into open space, however, so it will be much more difficult for the Packers to so thoroughly dominate up front this time around.

Shanahan will use shifts and motion and any other kind of misdirection necessary to get his players lanes that would not otherwise be there, and he’ll weaponize the versatile skill sets of players like George Kittle (blocking and receiving), Deebo Samuel (receiving and rushing), and all three of his running backs (Tevin Coleman, Raheem Mostert, and Matt Breida) to confuse the defense into thinking one thing is happening when it’s really another. More than anything else, maintaining discipline and filling proper lanes is of the utmost importance against the 49ers, especially in the run game.

Green Bay showed some issues in the passing game that are especially worrisome against a team like San Francisco. Most troubling is their ranking of 24th in DVOA on passes to tight ends. George Kittle is arguably the most dangerous tight end in football, and if you can’t stop him, you likely will not be stopping the San Francisco offense. But the Packers’ work on the perimeter was also inconsistent, with all three of their top corners having extreme ups and downs during the regular season.

Early in the season, the Packers’ secondary, particularly cornerback Jaire Alexander, was excellent. Through the first four weeks of the season, Alexander ranked 15th in opponent’s passer rating among 78 cornerbacks who played at least 100 passing snaps. Tramon Williams ranked 25th and Kevin King ranked 30th. Each of them was allowing a passer rating at least seven points below the league average.

In Weeks 5 through 12, the trio all backslid, and pretty badly. Alexander allowed a 114.1 passer rating during that time, 90th among 106 qualifying cornerbacks. King ranked 72nd among the same group with a 106.1 rating and Williams ranked 74th at 106.5. During the team’s current six-game winning streak, which stretches back to Week 13, they have all rebounded. They rank ninth (King, 53.1), 23rd (Williams, 74.8), and 36th (Alexander, 88.4) among 93 qualified corners in opponent passer rating on throws in their direction.

The way Shanahan typically operates is that he zeroes in on a player or two to take advantage of in space, and then beats you with that until you adjust and make him pick on somebody else. If I had to hazard a guess, Kevin King would be the first guy up, followed by an effort to get Kittle matched up on a safety so he can use his size. If the Packers can figure out answers for those attacks, that’s when the game gets really interesting.