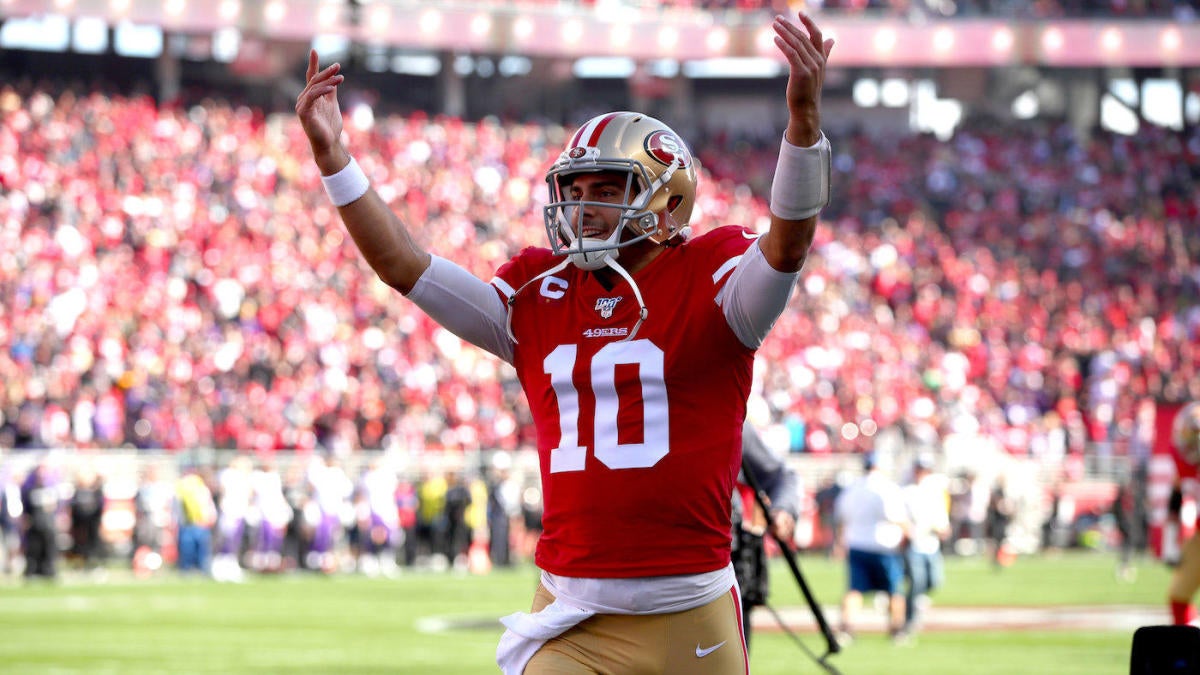 For the first time since the Harbaugh-Kaepernick era, the San Francisco 49ers are back in the NFC Championship Game. On Sunday, after a complete demolishing of the Vikings in their playoff opener, they’ll host the Packers with a spot in the Super Bowl at stake. If they win, they’ll be on their way to their seventh Super Bowl, where they’ll seek their sixth win — but their first since 1995 — against either the Chiefs or Titans.

Two wins away from the ultimate prize, let’s run through the five things that need to happen for the 49ers to finish off a season that has already exceeded all expectations with the Lombardi Trophy.

I think he’s a good quarterback. Coming into the playoffs, I ranked him as the eighth-best quarterback (out of 12) in the playoffs, ahead of Josh Allen, Carson Wentz, Aaron Rodgers, and Tom Brady. He finished the regular season fourth in completion percentage, seventh in touchdown rate, third in yards per attempt, eighth in passer rating, 12th in DYAR, 11th in DVOA, and 12th in total QBR. Most importantly, he has a genius play-caller in his ear. Shanahan has consistently been able to scheme open and easy throws for his quarterback. Garoppolo averages only 6.5 intended air yards per throw, according to Next Gen Stats. Only Teddy Bridgewater and Derek Carr averaged less.

Garoppolo is good and he’s armed with a great play-caller, but he has a tendency to give the ball away. This is probably the biggest threat to the 49ers’ chances of winning the Super Bowl. Their quarterback is turnover prone.

Garoppolo threw 13 interceptions in the regular season for an interception rate of 2.7. That was the seventh-highest interception rate in football. For the sake of comparison, Jets quarterback Sam Darnold ranked sixth at 2.9 percent. Garoppolo also fumbled 10 times, which tied for the eighth-most among all players.

Against the Vikings, Garoppolo nearly got picked off in the early going by Eric Kendricks when he tried to jam a pass downfield. Later in the game, he was picked off by Kendricks, which gave the Vikings a chance to tie the game — a chance Cousins declined to take when he missed a wide-open Diggs inside the 10-yard line. As soon as Garoppolo released the football, the press box at Levi’s Stadium groaned, because everyone except Garoppolo saw Kendricks.

It’s a credit to the 49ers’ defense and run game that they managed to win a playoff game with their quarterback going 11 of 19 (57.9 percent) for 131 yards (6.9 YPA), one touchdown, one pick, and a 74.7 passer rating. But the 49ers are good enough from top to bottom to win two more games with mediocre or adequate quarterback play. What they can’t have is a quarterback turning the ball over and gifting their opponents advantageous field position.

Garoppolo doesn’t have to play like Patrick Mahomes for the 49ers to win the Super Bowl. He just needs to take the openings his coach schemes up while avoiding the kind of mistakes that lets lesser teams escape with upsets. For Garoppolo, it’s all about limiting turnover-worthy plays.

Sort out the situation at cornerback

Early on in the first quarter of their eventual drubbing of the Vikings, the 49ers’ defense was getting worked down their right sideline. With Richard Sherman locking down the other side of the field, Vikings quarterback Kirk Cousins zeroed in on a matchup he found much more appealing: Stefon Diggs against Ahkello Witherspoon.

On that series, Cousins dropped back to pass six times. Including a pass-interference penalty against Witherspoon, Cousins gained 73 yards on those six dropbacks. In addition to the penalty, Witherspoon also surrendered a 41-yard touchdown when he was beat to the ball by Diggs downfield.

Witherspoon was quickly benched for Emmanuel Moseley, who fared far better than Witherspoon in coverage. Heading into a matchup where they’ll be required to slow down Davante Adams, the 49ers now have a decision on their hands.

Considering Moseley played most of the game and was an upgrade over Witherspoon, it seems like a relatively safe assumption that it’ll be Moseley starting opposite Sherman on Sunday. I think it’s the right decision too.

It’s an especially important decision since the 49ers don’t like to move their corners across the field to create better matchups. They’ll likely leave Sherman isolated on his side of the field and let him lock down half of the field — something he’s done all season long, including on Saturday, when he was targeted only once in the first half and then promptly picked off Cousins in the third quarter when Cousins finally dared to throw his way. Sherman will shut down one half of the field. The Packers probably know this. Remember when Rodgers admitted to Sherman — then with the Seahawks — after a game in 2014 that he purposely avoided throwing to his side of the field? Don’t be surprised if Rodgers, one of the more risk averse quarterbacks, does something similar on Sunday. Which means the cornerback on the other side of the field, whether it’s Moseley or Witherspoon, could be targeted heavily in coverage.

The 49ers need that second cornerback to hold his own.

On a related note, the 49ers need to continue limiting explosive plays.

The 49ers’ defense frustrated the Vikings, who failed to hit on many deep shots (outside of that early touchdown to Diggs) partly because Cousins refused to give his receivers a chance downfield, choosing to check the ball down underneath instead. After the game, Cousins noted that the 49ers were the league’s best team at preventing explosive plays. He’s not wrong.

The good news is that the Packers ranked in the bottom half of the league in explosive passing plays. That said, Rodgers did go 4 of 4 when he threw the ball 15-plus yards downfield against the Seahawks and two of those completions resulted in touchdowns. But the Seahawks don’t have the kind of defensive line that the 49ers have. Rodgers should face more pressure than he did against Seattle, which might limit his chances to throw downfield.

The strength of this 49ers defense is up front with a defensive line featuring the likes of Dee Ford, Nick Bosa, DeForest Buckner, and Arik Armstead. That unit is good enough to win on their own, which allows the 49ers to only send four to hunt the quarterback and drop seven men back into coverage. That was problematic for the Vikings.

But the 49ers were able to do that against a Vikings offensive line that struggles in pass protection. On Sunday, the 49ers will be up against a Packers offensive line that finished the regular season ranked first in pass-block win rate. The Titans ranked fourth. The Chiefs ranked 14th, but their offensive line was banged up for most of the year — most notably, left tackle Eric Fisher missed eight games. They’re healthy now and just kept Mahomes remarkably clean against the Texans even though the Texans knew Mahomes would be throwing the ball on nearly every dropback after falling into a 24-0 hole.

The 49ers’ defensive front will be tested in the coming weeks.

Let’s flip to the other side of the ball. The 49ers are a much better run-blocking than pass-blocking team. They finished the year 26th in pass-block win rate, but eighth in adjusted line yards. It helps that they have a tight end who is a monster in the run game.

That doesn’t mean the 49ers aren’t a good passing team. They’re ranked eighth in passing offense by DVOA and 13th in running. And throwing the ball will always be a more efficient mode of transportation than running the ball.

But the 49ers can run the hell out of the football and steal the soul from opposing teams in the process as they grind them to a pulp. We just saw them do it against the Vikings. In the win, the 49ers ran the ball an incredible 47 times for 186 yards. They put the game away in the third quarter when Sherman picked off Cousins and the offense mounted an eight-play, 44-yard touchdown drive. All eight of those plays were runs. The 49ers wore down the Vikings — a team with a tremendous defensive front — and bullied them as the game wore on.

I’m not advocating for a Seahawks-esque approach. Throwing the ball is more important than running the ball. But the 49ers don’t have a great quarterback (more on that in a second) or a great pass-blocking offensive line. And here’s where it’s worth noting that the Packers have the league’s 23rd ranked run defense by DVOA. Assuming the 49ers and the Chiefs win on Sunday — they’re both 7.5 point favorites for a reason — the 49ers would face a Chiefs defense that is 29th against the run by DVOA.

Throwing the ball is more important than running. But running the football matters — especially for the 49ers, especially if they get up against an inferior Packers team and want to salt away the game.