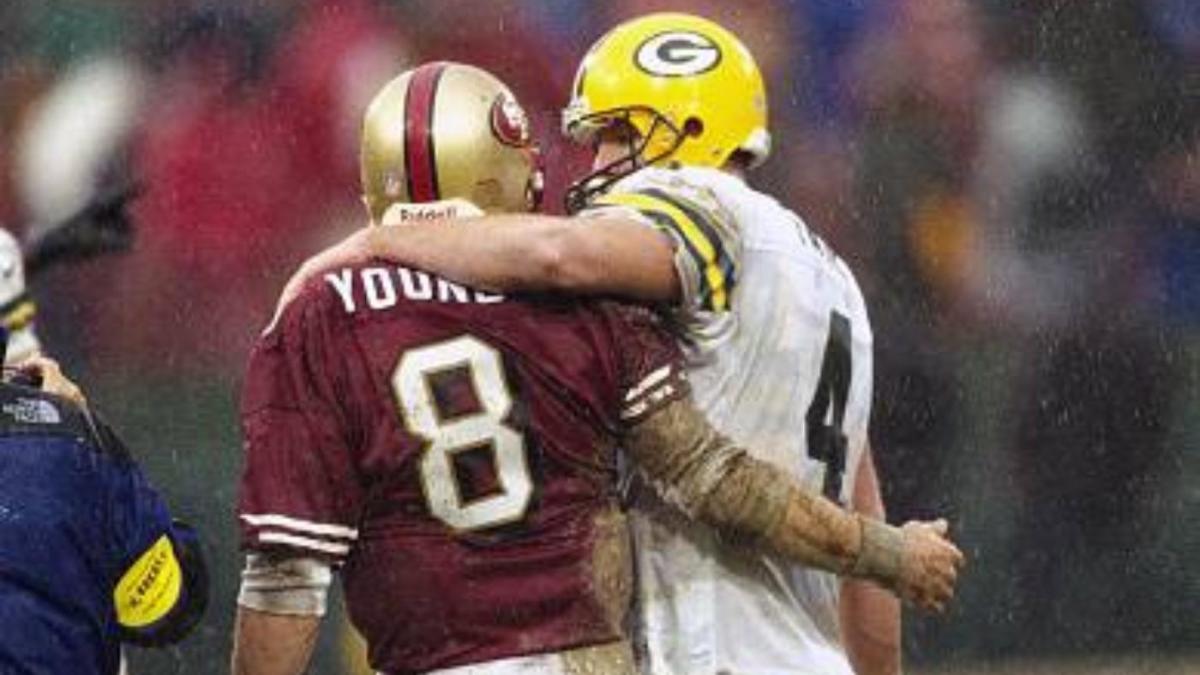 The NFL has never been devoid of compelling rivalries. The Bears-Packers rivalry goes back to the 1920s when Curley Lambeau’s Packers dueled against the Bears and their legendary coach, George Halas. Since then, the NFL has enjoyed a slew of compelling rivalries, from the Packers-Cowboys clashes in the late 60s to the Steelers-Raiders duels in the 70s to the 49ers‘ late ’80s/early ’90s matchups against the Giants and Cowboys. More recently, Peyton Manning’s battles against Tom Brady’s Patriots captivated the football world while increasing the NFL’s popularity in the process.

The NFL has also birthed rivalries that transcend time. No matter who is on the opposing sidelines, it seems that every team in the NFC East, AFC North, and NFL North are bitter rivals who would do anything to gain the upper hand. The AFC West also includes the fabled Chiefs‘ rivalries with the Broncos and Raiders, two rivalries that date back to the old AFL.

A rivalry that is often forgotten is the one that was created in the 1990s between the 49ers and Packers, two teams with future Hall of Fame quarterbacks that were trying to take the mantle from the Cowboys as the NFC’s top team. In the process, Green Bay and San Francisco developed their own rivalry that, like many rivalries before and after it, added to the pomp and pageantry of the NFL while helping increase the popularity of the sport.

With the 49ers and Packers set to add to their playoff history in this Sunday’s NFC Championship Game, we decided to look back at the four playoff meetings between these two teams during the ’90s, and how those games helped re-write NFL history as we know it.

The NFC (and NFL’s pecking order, for that matter) was pretty concrete heading into the 1995 season: Dallas, San Francisco, and everyone else.

After ruling the NFL during the 1980s, the 49ers’ reign atop the pro football food chain was halted by the Cowboys in the 1992 NFC Championship Game. Despite capturing his first of two league MVP awards during the ’92 season, 49ers quarterback Steve Young was unable to lead San Francisco past a loaded Dallas team that would again defeat the 49ers in the ’93 NFC title game. The 49ers, however, would deny the Cowboys a shot at a third consecutive Super Bowl win after defeating them in the ’94 NFC Championship Game, 38-27. The 49ers, with Young at the peak of his powers, would dismantle the Chargers in the Super Bowl to become the first franchise with five Lombardi Trophies.

Despite losing cornerback Deion Sanders to the Cowboys and running back Ricky Watters to the Eagles, the 49ers were again the favorite to represent the NFC in the Super Bowl entering the 1995 playoffs, especially after their convincing win against the Cowboys in Dallas during the regular season. The Packers, their divisional round playoff opponent, was supposed to be the appetizer San Francisco would devour before feasting on the Cowboys in the NFC title game.

The Packers, however, had other plans in mind. While Green Bay was armed with league MVP Brett Favre, they also had an advantage in head coach Mike Holmgren, who had served as the 49ers’ quarterbacks coach and offensive coordinator during the later portions of their dynasty. Holmgren’s familiarity with his former team would play a major — albeit unappreciated — role in the outcome of the Packers’ playoff success against the 49ers during the ’90s.

Green Bay quickly jumped on the Packers, with cornerback Craig Newsome’s 31-yard fumble return giving Green Bay an early lead. The lead swelled to 21-0 after Favre connected on a pair of touchdown passes to tight ends Keith Jackson and Mark Chmura. While Young and the 49ers fought back, they could not overcome Favre, who led the Packers on two more scoring drives in the second half to lead Green Bay to a 27-17 victory. While Young attempted a playoff record 65 pass attempts, it was Favre who enjoyed the better day, going 21-of-28 for 299 yards and two touchdowns with a 132.9 passer rating.

Favre, despite his best efforts, was unable to lead the Packers to an upset the following week in Dallas, as the Cowboys edged the Packers en route to their third (and final) Super Bowl win during the decade.

1996: Packers overcome 49ers and a mind-boggling mistake in blowout win

It’s not an overstatement to say that the 1996 Packers when healthy were unstoppable. That season, the Packers boasted the league’s top-ranked offense and defense along with the league’s best player in Favre, who won his second consecutive league MVP award. Green Bay went 13-3 during the regular season while enjoying a larger average margin of victory than any of the 30 Super Bowl champions before them. Green Bay’s success during the ’96 regular season included a thrilling overtime win over the 49ers in Week 7.

But with the Packers ahead 21-7 at the intermission and set to receive the second-half kickoff, a mind-boggling mistake by Howard threatened to change the complexion of the game. Instead of being on the field for the second-half kickoff, Howard had yet to come out of the locker room. The issue was that no one, Holmgren included, realized that Howard wasn’t on the field by the time the 49ers kicked off, leaving an empty spot on the field where Howard was supposed to be. The result was a recovered kickoff by the 49ers, who pounced on the ball deep inside Packers territory. The 49ers scored on the game’s next play, as the Packers were in jeopardy of blowing a 21-point lead.

Green Bay responded with gusto on their ensuing drive. After running back Edgar Bennett got things going with a 13-yard run, an 18-yard completion from Favre to Freeman set up Freeman’s recovery of a fumble by Bennett near the goal line that gave the Packers a 28-14 lead. The Packers would never again be threatened by the 49ers, who played the majority of the game without Young, who was dealing with a serious rib injury. After forcing a punt on San Francisco’s ensuing possession following Freeman’s score, linebacker Brian Williams’ forced/recovered fumble of running back William Floyd set up Bennett’s 11-yard touchdown run. Green Bay’s 34-14 win was just the start of the Packers’ postseason run, as Green Bay would go onto defeat the Panthers and Patriots to win their first Super Bowl in 29 years.

Holmgren, years later, explained why Howard wasn’t on the field for the start of Green Bay’s playoff game against the Packers.

“He goes, ‘Coach, my jersey, I was all dirty, I had to change my clothes,'” Holmgren said during an NFL Films documentary when he recalled confronting Howard on the sideline. “I said, ‘Well good, I’m really happy that I’m feeling better about how you look.’ That’s not exactly what I said.”

For the first time ever, both visiting teams were underdogs heading into the weekend’s conference championship games. After John Elway, Terrell Davis and the rest of the Broncos took care of business in Pittsburgh, the Packers followed suit in San Francisco, defeating the 49ers at a rain-soaked Candlestick Park, 23-10.

As they had the two previous playoff meetings, the Packers jumped out to an early lead, as two Ryan Longwell field goals and a 27-yard touchdown pass from Favre to Freeman gave Green Bay a 13-3 halftime lead. Running back Dorsey Levens, who rushed for a career-high 1,435 yards during the regular season, gave the Packers a 23-3 lead on a five-yard touchdown run with just under four minutes remaining.

Fittingly, the game’s last big play was turned in by Green Bay’s defense, as defensive end Keith McKenzie recording a sack/forced fumble that was recovered by the Packers. Despite allowing 49ers’ receivers Terrell Owens and J.J. Stokes to catch a combined 12 passes for 187 yards, Green Bay’s defense, led by defensive end Reggie White and safety LeRoy Butler, kept the 49ers’ offense out of the end zone while forcing three turnovers and allowing just 33 rushing yards. The Packers, meanwhile, enjoyed a successful ground attack led by Levens, who rushed for 114 yards while leading the Packers to their second consecutive Super Bowl.

Unfortunately for the Packers, their brief reign atop the NFL mountaintop came to an end two weeks later in Super Bowl XXXII. Despite jumping out to an early lead, two first-half turnovers from Favre and 157 yards and three touchdowns by Davis propelled the Broncos to a 31-24 win in one of the greatest Super Bowls ever played.

Most fans and sportswriters expected another Packers playoff win over the 49ers when the two teams faced each other in the 1998 wild-card round. While Green Bay wasn’t as strong as they were the previous three years, they still had Favre (who threw 31 touchdown passes that season), Freeman (14 touchdown receptions in ’98) and White (16 sacks in ’98) at the height of their powers. The 49ers still boasted the talents of Young (36 touchdown passes), Hall of Fame receiver Jerry Rice (1,157 yards, nine touchdowns) Pro Bowl running back Garrison Hearst (1,570 yards), and future Hall of Fame pass rusher Chris Doleman (15 sacks). They also had a young receiver named Terrell Owens, who ended up having one of the most remarkable games of his colorful career.

As expected, the Packers took an early lead before the 49ers rallied back to take the lead with just under three minutes left in the third quarter. Six carries for 38 yards by Hearst, along with a 15-yard pass interference call on a third and 15 play, set up Wade Richey’s go-ahead field goal.

Both teams then traded field goals before a drop by Owens — who dropped several passes throughout the course of the game — forced the 49ers to punt with 4:19 left. Trailing 23-20, Favre quickly drove the Packers 89 yards in just over two minutes, completing three passes for 62 yards on the drive before hitting Freeman for the go-ahead touchdown. At that moment, it seemed that the Packers were on their way to a fourth straight postseason win over the 49ers.

The 49ers, with their season — and that era’s Super Bowl window — on the line, took over at their own 41-yard-line with 1:50 left. Two completions to receiver J.J. Stokes, and a terribly missed call on what should have been ruled a fumble by Rice (the NFL did not have instant replay at this time), the 49ers had the ball on the Packers’ 25-yard line with eight seconds left. It was at this point that Owens, who had had a terrible game up until then, made the play that is still known on the West Coast as “The Catch, Part II”.

This epic duel served as the fourth and final playoff game between the two teams during this time. While the 49ers — who lost a tightly contested game the following week to the Falcons — would lose the remaining stars of their championship teams in the coming years, the Packers would lose Holmgren during the ’99 offseason, as Holmgren began the second phase of his head coaching career in Seattle.