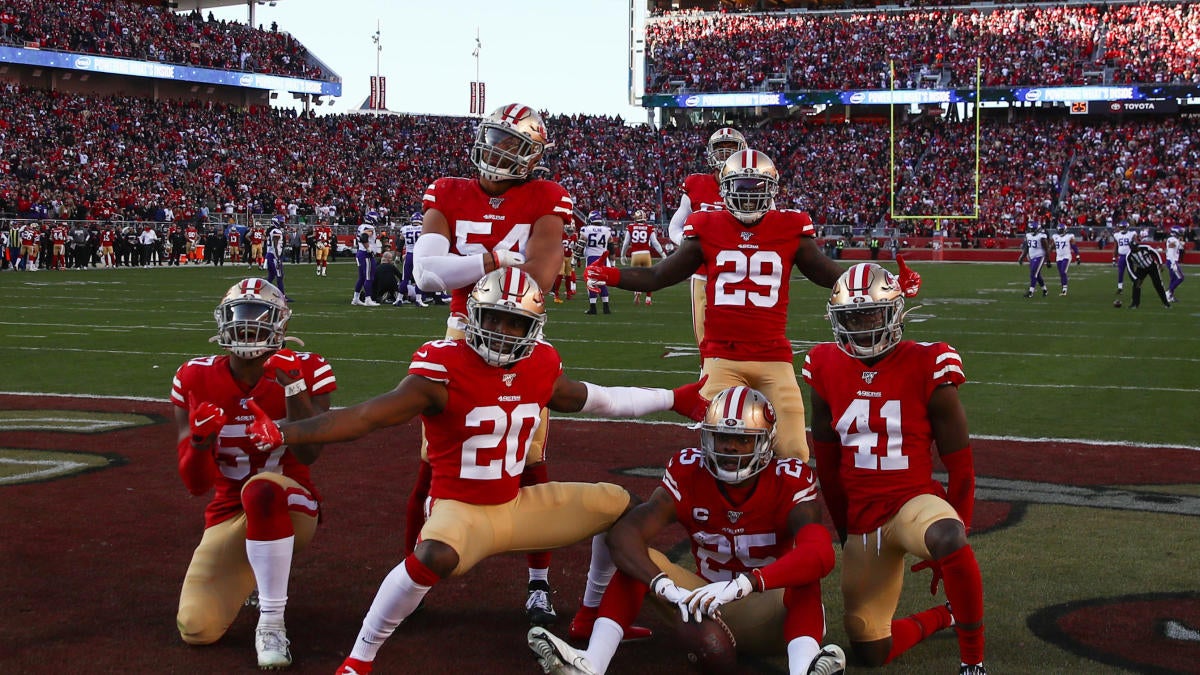 SANTA CLARA, Calif.— Aaron Rodgers was going through all the postseason clichés earlier this week when visiting with media in Wisconsin. This game is no different than any other. It’s for 60 minutes. It’s 11-on-11.

He meant these things as a sort of calming effect on the locker room as the Packers remain one of the four teams left playing this season. And then he arrived at the betting line. The Packers are 7.5-point underdogs to the NFC’s No. 1 seeded-49ers heading into the weekend — the same Niners who stomped Green Bay 37-8 in Week 12 earlier this season.

“They’re obviously expected to hold court and win and people know and are talking about how we played the last time,” Rodgers said. “So, I think if you look at pressure, the pressure is in a certain place and we should be nice and loose.”

With respect to Rodgers, if the 49ers are supposed to be feeling the pressure, they sure as hell aren’t showing it.

San Francisco is as loose a team as any I’ve seen this late in a season. They’re dancing on the field. In the locker room, they’re splitting DJ duties and shooting hoops. And yes, it’s easy to be loose when you’re the top dog with 14 wins in a season.

But head coach Kyle Shanahan pointed out earlier this week it’s not just winning that has this team closely knit. The roots of this season could be discovered in last year’s 4-12 campaign.

“I thought we had some pretty good chemistry last year and we didn’t do that well,” Shanahan said. “I felt it strong this whole offseason. I think as you go through a season together and you have a lot of experiences, and most of those have been pretty positive this year, I think it only gets stronger. I think we were pretty special going into the year and based off how this year’s gone, I think it’s gone extremely strong.”

The culture of the Niners starts with Shanahan, the just-turned-40-year-old head coach with his coaching pedigree, California tan and flat-bill hats on gameday. The son of a three-time Super Bowl-winning head coach and coordinator of an NFC champion Falcons team, Shanahan (and general manager John Lynch) knows the ingredients for a championship culture. And by virtue of his time in Washington and Cleveland, Shanahan also knows what it takes to have a bad culture.

Again, it’s easy to say when they’re winning, but you’ll struggle to find any bad apples in this bunch. As Shanahan said Friday, “you try to let people be who they are, but you better like who they are, also.” And Shanahan lets these guys be themselves, and no one can speak to that more than receiver Kendrick Bourne, the team’s best dancer.

“It makes the game easier. It makes life easier, to know you don’t have a coach who’s trying to make you be a certain kind of way,” Bourne told me. “I can come in here and be a goofball. I know when to be serious, but they understand the kind of personality I have and they know what makes me tick. They allow us to be ourselves and that’s what you see on the field all the time. That’s why you see so much dancing and smiling and success at the same time.”

“I’ve been around coaches who attack people and they get nothing,” Saleh said. “Kyle’s art and the way he coaches is he challenges you to do more and look beyond the box, look outside the box, look outside what you’re comfortable with so you can continually get better. Much different than the tone that a lot of coaches that I’ve been around where they just attack you and demean you for one reason or another. It’s fully expected from Kyle.

“He’s been that way his entire career. He expects greatness, and you’re not being great unless you’re challenging yourself, and hopefully I’m answering your question, but just Kyle, knowing him that long.”

It creates a level playing field both in the meeting rooms and between coaches and players. What I’ve found most interesting being around this team the past two weeks is that no player I’ve spoken to has called Shanahan “coach” or “Coach Shanahan” when speaking to the media.

From Jimmy Garoppolo down to eventual Sunday inactives, players here all call him “Kyle” because, as Garoppolo told me, “we’re all in this together. Everyone acts the same and you treat everyone the same.” Shanahan notes it’s not unique solely to the 49ers, but there’s a level of intentionality to not being known simply as “Coach.”

“It’d probably make me more uncomfortable if they all referred to me as ‘Coach,'” Shanahan said. “I think that most of them do at first and it’s not like I address it at first. I’m sure some of them do but it comes off pretty natural for everybody.

“I’m glad they’re comfortable with me that way.”

There is no hard-and-fast rule for games in NFL locker rooms. Ron Rivera just got to Washington and removed the ping-pong table. When Sean McDermott got to Buffalo, he took out the video games, pool table, and air hockey table but kept ping pong. The three-time defending NFC South champion Saints have both Mario Kart and ping pong in their locker room.

In the Levi’s Stadium locker room, there are two basketball hoops, four decks of playing cards, dominos and anywhere from three to six boomboxes at a given time.

Music is a key part of this team. Shanahan’s assistant, Nick Kray, serves as DJ for the team during practices. Friday during the portion of practice open to the media, he played 2 Chainz’s 4 AM followed by Playboi Carti’s wokeuplikethis* and then Travis Scott’s Sicko Mode.

In the locker room, any player can sync up to the two, red, 3-foot-long bumpboxxes by following the instructions posted on the wall. But those I spoke with generally agreed that the top DJs on gamedays are Bourne, Deebo Samuel, and Kwon Alexander, with Alexander taking the bulk of DJ duties on Sundays.

Veterans like Richard Sherman and Emmanuel Sanders have said all postseason that the younger players on the team keep things light and fun, and they’ve encouraged them to keep their same energy in January. And Sherman, who was on two NFC championship teams in Seattle, had some high praise for this group.

“I’ve been on some pretty tight teams, but this is right up there with them,” he said this week.

The pressure’s on the 49ers? Not hardly.

“I think the pressure comes from if you make the situation bigger than it is,” linebacker Fred Warner said. ” You know, it’s funny, we were all talking about it just the other day, how last game it kind of just felt like another week even though the stakes are high and there’s a lot on the line. We don’t treat it as such. We treat it like it’s another week. The routine doesn’t change. Our preparation doesn’t change.

“I think the same could be said this week. We’re just going about our business, but we’re having fun doing it.”