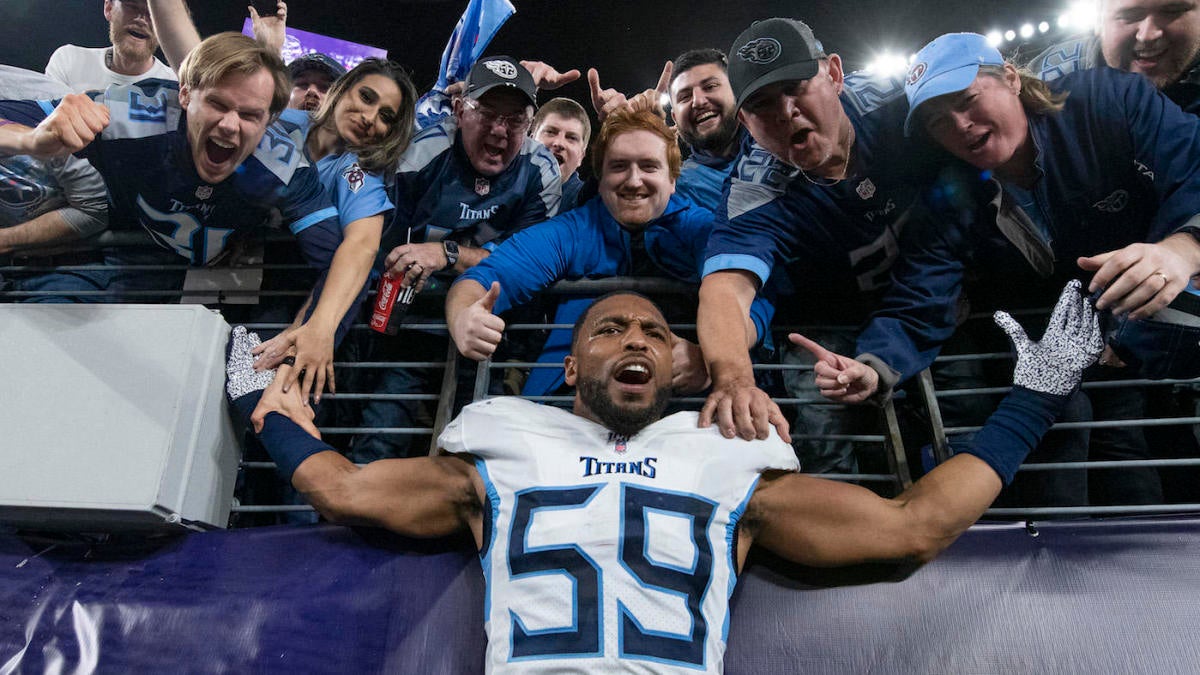 The Tennessee Titans — once 2-4 and in last place in the AFC South — are now just one game away from representing the AFC in Super Bowl LIV. It’s been an incredible turnaround which involved a big change under center, as Ryan Tannehill’s rebirth in Tennessee has taken the Titans to new heights.

Tannehill went 7-3 as the starter in the Titans’ last 10 games. They clinched a spot in the postseason in Week 17, but no one viewed them as a threat to make a deep run in the playoffs. They shocked the NFL in the wild-card round, when they took down the New England Patriots, 20-13. Running back Derrick Henry singlehandedly took over the game with 182 rushing yards, and the Titans were off to take on the No. 1 seeded Baltimore Ravens. While the win over the Patriots was nice, they certainly weren’t the dominant team they had been in years past. The Ravens were a young team that ran through the 2019 season, and hadn’t lost since late September. The Titans once again shocked everyone by dominating the Ravens from the get-go, as Henry again put up monster numbers with 195 rushing yards on 30 carries.

So, the Titans appear to be a team of destiny this year. They have had the hardest road in the postseason, yet have survived to be matched up with the Kansas City Chiefs in the AFC championship game. With just two potential matchups left on the docket, what do the Titans need to do to put them in the best possible spot to win their first Super Bowl championship? Let’s take a look:

Derrick Henry needs to continue to play at an MVP level

Let’s start with the most obvious key to a Titans’ Super Bowl victory. Titans head coach Mike Vrabel likes to say, “If it isn’t broke, don’t fix it.” That’s why the Titans have fed Henry at least 30 times in both of Tennessee’s postseason games. They say the NFL is becoming more of a passing league, but don’t tell the Titans that. Their star running back has steamrolled past two of the best teams in the league and into the conference championship. He’s rushed for 377 yards and accounted for two touchdowns in the playoffs — and if the Titans want to win the Super Bowl — he’s going to have to remain healthy and play like the postseason MVP he has been. The Chiefs allowed an average of 128.2 rushing yards per game in the regular season, which ranked No. 26 in the league. He should be in line for another big game this Sunday. If the Titans then have to play a team like the San Francisco 49ers, it will probably be much tougher for him to break to the second and third levels. The Titans are going to continue to feed Henry until he falls over, and that’s clearly been working for them up to this point.

Ryan Tannehill needs to be ready to step up

This doesn’t mean that Tannehill needs to play better than he has, but he simply has to be ready to go when his number is called. Tannehill has proven that he’s capable of being one of the best quarterbacks in the NFL. He completed 70.3 percent of his passes for 2,742 yards, 22 touchdowns and just six interceptions in 11 regular-season games. He also has rushed for four more touchdowns on the ground. He finished the season with the best passer rating in the NFL, and at times was absolutely deadly through the air. However, he has thrown for just 160 yards, three touchdowns and one interception in the postseason, but that’s because Henry has been an absolute monster on the ground. He threw just 15 passes against the Patriots and 14 passes against the Ravens — both of those numbers are lower than any amount of passing attempts he has thrown in the regular season. In the conference championship game and possibly the Super Bowl, Tannehill has to be the quarterback he was in the regular season. You’ve seen members of the national media wonder over the past few days if Tannehill will be “rusty” when he’s called to throw the ball more than 15 times. I don’t think he will be rusty. I think he will be chomping at the bit. Still, he will have to be ready to carry the load at one point or another, and he’s capable of doing so.

Get stars involved in the passing game

Henry has been everything you could want on the ground, but do you know who has caught touchdowns for the Titans in the postseason? Anthony Firkser, Jonnu Smith and Kalif Raymond. Not many people outside of Tennessee know who those guys are. Corey Davis did catch a touchdown pass from Henry against the Ravens, but that was off of a trick play. The Titans’ No. 1 wideout, A.J. Brown, led all rookies with 1,051 receiving yards in the regular season, but has caught just two passes for 13 yards in the postseason. He’s an electric playmaker, and has the potential to turn any touch into six points. At some point, he is going to have to be a much larger part of the game plan.

Likewise, Davis has to get going. His one touchdown catch from Henry is the only touch he has had this postseason! Davis is a capable wideout who caught 43 passes for 601 yards and two touchdowns this season. He’s a former No. 5 overall pick, and recorded more receiving yards than anyone in Division I history at Western Michigan. Davis is ready to prove himself, and he will have an opportunity to do so with most of the attention in the secondary going to Brown.

Tennessee’s role players have done an incredible job stepping up this postseason. Now, the stars are going to have to shine bright as well.

One game at a time

Before you criticize me for using one of the most egregious postseason cliches, let me explain. The Titans have played more playoff games this year than anyone, they were underdogs in all of them and they noticeably adjusted their game plan for each — especially on the defensive side of the ball. The conference championship is the one matchup remaining before the Super Bowl. A chance at glory is close, but the Titans understand that at the same time, it’s very far away.

“We have to really remember what got us here, that is the main thing,” safety Kevin Byard said earlier this week, via the Titans’ official website. “Really, just understanding that even though we are so close (to the Super Bowl), we are still so far away. The reason that we are here now, being that we were 2-4 – everybody thought the sky was falling. But we kept telling each other: Hey, let’s just get to 1-0 this week and it’s been a formula that has been working for us. So why change now? If it ain’t broke, don’t fix it. That’s the mentality we have to take.”

The Titans handled the Patriots as if it was their Super Bowl and handled the Ravens like it was their Super Bowl. This isn’t a state of mind the Titans have adopted for the postseason, they adopted it way back in Week 7. The Titans were 2-4 and just made a quarterback change. Understanding their place in the standings, Tennessee knew each game would be important and sure enough, the Titans’ postseason ticket was punched on the very last day of the season.

There was some added excitement this week during press conferences in Nashville. Reporters knew that the Titans were just one game away from their first Super Bowl appearance in 20 years and several media availabilities were being broadcasted on national television. Vrabel and the players were calm and collected, however, and told everyone to forget the Super Bowl talk. Every team says they take the playoffs one game at a time, but the Titans seem to understand that more than anyone since they have played more games than any other team.

Defense needs to continue to be a quick study

Teams obviously change up their defensive schemes with every game, but the Titans have adjusted their defensive play calls noticeably to take down the Patriots and the Ravens.

Against Tom Brady and the defending Super Bowl champions, we saw the Titans bring pressure from many different directions. There were stunts where defensive tackles would step back to patrol the short middle of the field — it was all about disguising coverages. Many times in the first half, the Titans would line up seven men up on the line of scrimmage in short yardage situations, yet they would only rush four while the other players on the line would control their gaps. Defensive ends, linebackers and cornerbacks would sit on the line of scrimmage and react to what developed. They owned those outside gaps and pushed the ball inside. The Titans also would disguise their blitzes. They would bring up a cornerback on one side of the ball and then an outside linebacker on the opposite side — both acting as if they were going to blitz. When the ball was snapped, one would fall back into man coverage while the other would be on an all-out pursuit of Brady. The Titans were very disciplined, and the game plan was certainly not predicated on aggressive blitzes to pursue Brady — but they would send a man or two at times to keep the offensive line on their toes.

Against the Ravens, when a linebacker or cornerback blitzed and found themselves one-on-one with Lamar Jackson in the backfield, they didn’t pursue him full speed. They crept up slowly with their hands in the air, preparing for which way he was going to scramble if he decided to do so. The defensive line certainly performed less stunts than they did against the Patriots. Linebackers flowed to the ball and remained disciplined in zone coverage. The interior linemen were charged with locking down the A-gaps, and they did a nice job. I also noticed some fake blitzes — just to see if it would rattle Jackson for a second. The linebackers would even cross the line of scrimmage towards the backfield on passing downs, but then retreat into a short zone. Whenever Jackson did scramble, the Titans never wanted to force him to the inside — they realized that’s actually where the probable 2019 MVP gained the most yards. The defense made him move laterally while the cornerbacks or safeties would move up to close the gap between the pursuing defender and the sideline.

As for the secondary, it has shown a healthy dose of both man and zone coverages, and I expect the same against the Chiefs this Sunday. Patrick Mahomes has the strongest arm in the league, so we may see more blitzes from the Titans than we have seen in the two previous postseason games. If you give Mahomes time, he’s going to hurt you. It would be best if the Titans didn’t give the Chiefs time to set up the long ball.