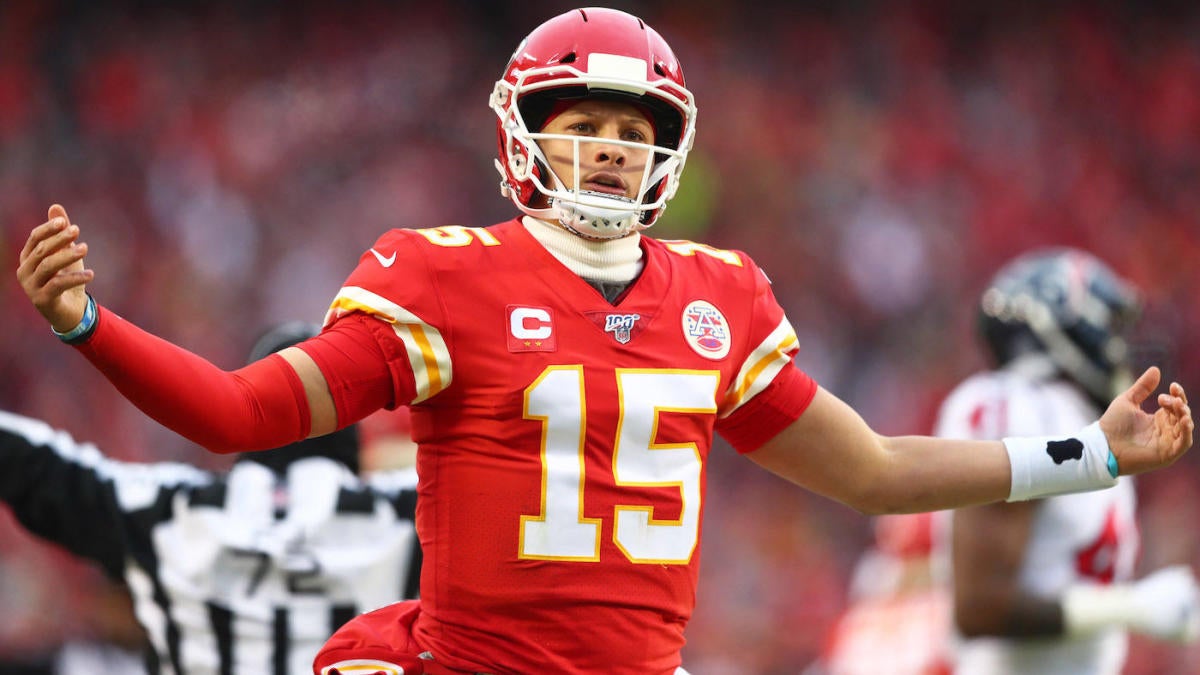 The AFC title game is a fascinating contrast in styles. Not just on the field, but in the way the teams were built. The Chiefs assembled a top-flight roster that had the look of an annual contender, and then made a bold move up the draft board to replace the quarterback who had led them there. The Titans moved down the board to stockpile picks, and eventually built a roster that we didn’t know was this good until they swapped out the No. 2 overall pick quarterback for the guy who washed out of Miami.

Now, Patrick Mahomes and the Chiefs are in the exact same position as Ryan Tannehill and the Titans: one win away from representing the AFC in the Super Bowl. Without further ado, let’s break down the matchup, but before we do, here is how you can follow along with the action:

Derrick Henry is currently on a roll that is quite literally unlike anything we have ever seen in the history of the NFL. Henry has carried at least 30 times for at least 180 yards in three consecutive games, which had never been done until he just did it. He also became the first player ever to rush for 175 or more yards twice in the same postseason and he did so rather easily.

At this point, it feels kind of fruitless to talk about whether and how the Chiefs can stop Henry. The dude is just running over, around, and through everyone, even though defenses know exactly what’s coming.

More than 60 percent of his carries last week against the Ravens came with eight-plus defenders in the box, per NFL.com’s NextGen Stats, and yet he still rumbled for 195 yards on 30 totes. Henry led the NFL in carries (138), yards (658), yards after contact (399), broken tackles (27), and first downs (28) on those same types of runs during the regular season, so it’s not like beating a box with eight defenders stacked is new to him. His yards per attempt and yards after contact per attempt on those runs each ranked third among the 31 backs with at least 50 carries against an eight-plus man box, as well, so it was not just a volume thing.

And it’s not like the Chiefs themselves have been all that great at stopping the run. In fact, it’s inarguably the team’s biggest weakness. Kansas City yielded 4.9 yards per carry, 29th in the NFL. The Chiefs also ranked 29th in Football Outsiders’ run-defense DVOA, as well as 28th in Adjusted Line Yards, 25th in success rate in power situations (they allowed a 71 percent conversion rate on third or fourth downs with two or fewer yards to go), and 30th in the percentage (14 percent) of opponent runs stopped at or behind the line of scrimmage. They allowed six individual rushers to break the 100-yard mark against them, including Henry himself, who lit them up for 188 yards and two scores on 23 carries back in Week 10. All this, and we still don’t yet know if Chris Jones — the team’s best interior defender — will be able to suit up after missing last week’s game with a calf injury.

So, if the Titans are able to put themselves in a position to run the ball as often as they clearly want to run it, it’s incredibly likely that they’ll find a way to be successful. The question is whether they can get to that position and how they can do it. Last week, for example, Henry had only 28 yards on seven carries by the time the team built its 14-0 lead. It was only then that he went bonkers, with 167 yards on his remainder 26 runs. Tennessee built that lead thanks to, essentially, two perfect plays: Jonnu Smith’s ridiculous juggling catch in the back of the end zone, and Khalif Raymond’s gorgeous route to get open for a 45-yard touchdown. And then the game was just over.

The formula for Tennessee beating the Chiefs likely has to be the same: jump out to a lead and then just lean on the opponent until they crack. The slight difference here is that, as we saw last week, the Kansas City offense is more equipped to come back from large deficits than Baltimore’s was.

It’s possible that just repeatedly handing the ball to Henry can get the Titans that lead, but they’re more likely to get it if Ryan Tannehill contributes — and likely in a bigger way than he has in the team’s first two games of this run to the brink of a Super Bowl berth. Given how little volume there has been for the Tennessee passing game through those two games, it’s difficult to comment on the state of the pass offense right now. They have essentially made three big plays in two games (the two mentioned above, plus Anthony Firkser’s touchdown against the Patriots), and that’s all that was needed.

Prior to the playoffs, though, the passing game was kind of rolling. Tannehill led the NFL in passer rating and yards per attempt during the regular season. After his subpar performance in a loss to the Panthers that now looks very strange, Tannehill completed 70 percent of his passes at 10.4 yards per attempt, with 16 touchdowns, two interceptions, and a 129.8 passer rating, while also running 27 times for 139 yards and three more scores.

The Chiefs provide tough matchups for all of Tannehill’s top targets. Kansas City showed great improvement against the pass this season, with Tyrann Mathieu, Charvarius Ward, Bashaud Breeland, Kendall Fuller forming the core of an excellent defensive backfield. They’ll play Ward at left corner, Breeland on the right, and Fuller in the slot, so if the Titans have a specific matchup they want to attack, they’ll be able to align themselves in order to get it. But the Chiefs, during the regular season, were excellent against throws to No. 1 (third in DVOA) and No. 2 (seventh) wideouts, as well as tight ends (fourth). Their biggest pass game weakness was running backs, which makes sense because if you had to pick a unit on the defense to attack, it would definitely be the linebackers. The Titans might want to think about mixing in a screen or two to Henry, or even Dion Lewis, just to keep them honest.

The Chiefs do not need to run the ball. In fact, if they run the ball, the defense should probably thank the football gods, because any play where Patrick Mahomes is not lighting the opposing secondary on fire is a win for the opposition.

This was perfectly demonstrated last week, when, in turning a 24-0 deficit into a 28-24 lead, the Chiefs handed the ball off one time and lost two yards on that play, while Mahomes completed 8 of 12 passes for 100 yards and four scores, while also scrambling twice for 35 yards and picking up 43 more on defensive pass interference calls. And that all happened in less than 10 minutes of game time.

There is not a throw that exists that Mahomes cannot make, and there are very few throws that he will not make. Back foot, rolling right, rolling left, across the body, wrong hand. He’ll try — and more than likely complete — anything and everything. A player like Mahomes is the reason the cliche, “You can’t stop him; you can only hope to contain him” exists.

So, how can the Titans contain him? First and foremost, the way to do this is to get pressure, especially up the middle. If the Chiefs’ offensive line has a weakness, it’s not on the edges, where Mitchell Schwartz is arguably the best right tackle in the league and Eric Fisher has developed into a very solid bookend on the left side. Attacking Austin Reiter, Stefan Wisniewski, and Laurent Duvernay-Tardif is the way to go. Tennessee’s interior group of Jurrell Casey, DaQuan Jones, Austin Johnson, and Jeffery Simmons absolutely dominated the Ravens up front last week, and they’ll need a similar performance from those guys if they’re going to bother Mahomes at all.

Behind them, the strategy this week almost has to be a bit different than it was a week ago. The Titans crowded the box with eight-plus defenders on almost every snap against the Ravens, focusing on taking away Lamar Jackson, Mark Ingram, and Gus Edwards in the run game, while daring Marquise Brown, Willie Snead, and the other receivers to beat them on the outside. The Ravens’ receivers were not up to the task against Tennessee’s strong secondary, but the Chiefs’ receivers are not the Ravens’ receivers. If you want to man up Tyreek Hill and Sammy Watkins and Travis Kelce, go ahead, but you’re going to have a long day. Just look at what happened to the Texans last week.

The thing is, backing off and playing soft zones doesn’t really work against Kansas City, either. Over the past two years, there have been 71 individual quarterback seasons where a player has thrown at least 100 passes against a zone defense. Mahomes’ 2018 and 2019 campaigns rank seventh (2018) and second (2019) among that group of 71 in passer rating. Combined, he completed 350 of 526 passes (66.5 percent) for 4,970 yards (9.45 per attempt), 40 touchdowns, 10 interceptions, and a 114.3 passer rating on those throws, per Sports Info Solutions.

Unlike the Chiefs, the Titans are willing to move their cornerbacks around in shadow situations pretty often. I’d expect Adoree’ Jackson, the team’s faster corner, to travel with Tyreek Hill more often than not when he’s aligned on the perimeter, with Tramaine Brock following Sammy Watkins. Whoever lines up in the slot will more than likely see Logan Ryan unless the Titans go into a full-field shadow rotation, in which case Ryan would bump outside to cover whichever of Watkins, Demarcus Robinson, or Mecole Hardman lines up out there.

Of course, the receivers are not the only tough matchup for the Tennessee defense. Travis Kelce is coming off of one of the best games in the history of the playoffs, as he became just the third player ever to catch at least 10 passes for at least 100 yards and three touchdowns in a postseason game. (The other two are Rob Gronkowski and Jerry Rice. Pretty good list.) And Damien Williams proved both last season and especially last week that he is a dynamic threat out of the backfield. That puts some pressure on linebackers Rashaan Evans, David Long, and Wesley Woodyard, plus safeties Kevin Byard and Kenny Vaccaro, to cover the middle of the field. They did an excellent job on Mark Andrews last week, but during the regular season, Tennessee ranked just 20th in DVOA on throws to tight ends and 23rd on throws to running backs. That’s a problem against this particular opponent.