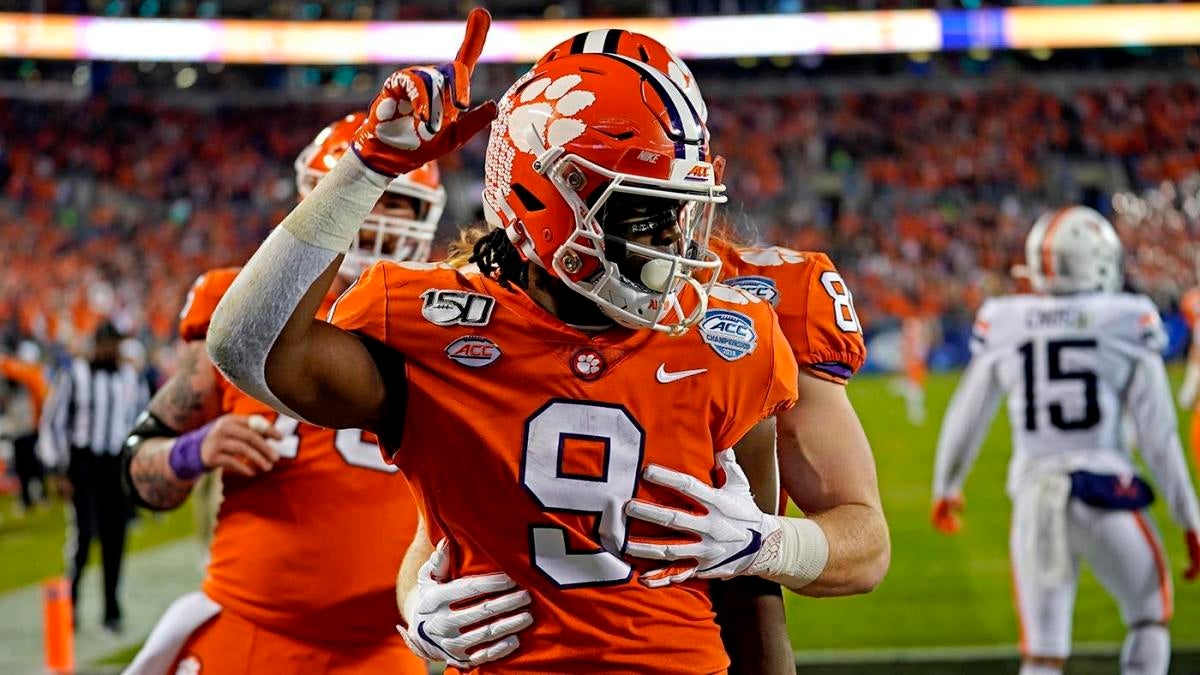 Travis Etienne shocked the masses by deciding to return to Clemson for this senior season instead of entering the 2020 NFL Draft, but while not as tremendous now, the long-hyped running back draft class is still talented.

After Etienne’s decision on deadline day, let’s reassess the group of ball carriers who’ll be available in April.

After back-to-back 2,000-plus yard campaigns at Wisconsin, Taylor made the leap from Madison to the NFL, and rightfully so. At 5-foot-11 and 220 pounds, he has ideal feature back size, outstanding vision to see blocks as they materialize, plus cutting skills and track speed down the field. The front-runner to be the first back off the board, Taylor could hear his name called in Round 1 but is most likely going to be an early second-round selection.

Highlighted in his huge performance against Clemson in the CFP semifinal, Dobbins has the low center of gravity, power, and lateral juice to accumulate extra yardage in a variety of ways. He’s thick in his lower half and his powerful leg churn allows him to push through weak tackle attempts with good regularity.

Swift is a jagged, flashy runner who won’t wow consistently, then will hurdle a linebacker and cut the second he lands to pull of a true highlight-reel run. He averaged over six yards per carry in each of his last two seasons at Georgia and is an efficient, decently linear runner with plus contact balance and high-end receiving skills. Despite all that, I do think it’ll take him time to become as effective in the NFL as he was in college because he’s not a truly make-you-miss back with phenomenal acceleration.

Though a touch smaller than the other backs in this group, Akers exceeded expectations not based on his big-time recruiting status but the state of the Seminoles offensive line during his time in Tallahassee. A low-center-of-gravity, powerful back with springy feet and deceptive speed down the field, Akers has fringe franchise back skills and should be a fun feature in an NFL screen game instantly.

South Florida native Moss landed at Utah and was a bouncy battering ram who displayed impeccable patience as blocks occurred in front of him. Moss isn’t super explosive but has arguably the best jump-cut skills in the class and finishes runs as hard as anyone. He came back heroically from his torn ACL in 2019 by averaging 6.0 yards per carry with 15 scores in 2019.

McFarland is arguably the most electric runner in the class, with instant acceleration, scary change-of-direction capabilities, and long speed you don’t see coming until he’s running past everyone down the field. Maryland’s blocking was average in 2019 but McFarland was a problem in space his past two seasons for the Terrapins. In today’s NFL, elusive, explosive backs thrive. McFarland is that type of back. Don’t be surprised when he outplays his draft position.

For as eye-poppingly awesome as McFarland is moving in a straight line, Edwards-Helaire is that fun bouncing laterally to avoid tacklers behind the line or close to it. His smaller, squatty frame allows him to naturally win the leverage battle against tacklers, and he runs with an immensely hard-nosed nature. As he demonstrated often in 2019 and the national title game, Edwards-Helaire is simply not easy to corral, and he finds extra yardage in small space or when he sees a defender on the perimeter.

A smooth, big back with fluid cutting skills and powerful legs, Vaughn was better in 2018 than he was a senior, but because of his size and experience navigating lanes on inside runs, he’ll be a feature back in the eyes of a handful of teams. While he won’t run away back defensive backs down the field, his contact balance is well above average and he has a masters degree in turning a two-yard run into a five-yarder.

Benjamin is a super-springy, shockingly powerful smaller back with comfort in the passing game and contact balance than allows him to almost effortlessly run through tacklers at the second and third levels of the defense. Benjamin carried the ball over 500 times in the past two seasons for the Sun Devils at over five yards per tote with 26 touchdowns. NFL teams will like that he caught 77 passes in that time frame as well. Benjamin looks like a bouncy scat back with no power. He’s not. He’ll lower the boom after he makes both of your linebackers miss in space.

Perine is the back you want if you’re more into a complete game instead of a true trump card and deficiencies in other areas. Perine runs low, with good lean and adequate bounce. He’s decently quick down the field and recognizes blocks as they pave lanes for him at the second level. He doesn’t stand out in any area but you’ll be hard pressed to find an area of his game in which he struggles.

Dillon looked the part from the moment he stepped foot on campus at Boston College, as he ran for nearly 1,600 yards with 14 touchdowns as a true freshman in 2017. His high-volume career with the Eagles culminated with a nearly identical season the ground in 2019. At 6-foot and 250 pounds, Dillon is shaped like a fullback, and while he isn’t going to set the track on fire at the combine, he has suddenness in his cuts to run through tackle attempts. Seriously, Dillon is unfazed by the attempts by many linebackers and defensive backs to take him to the turf.