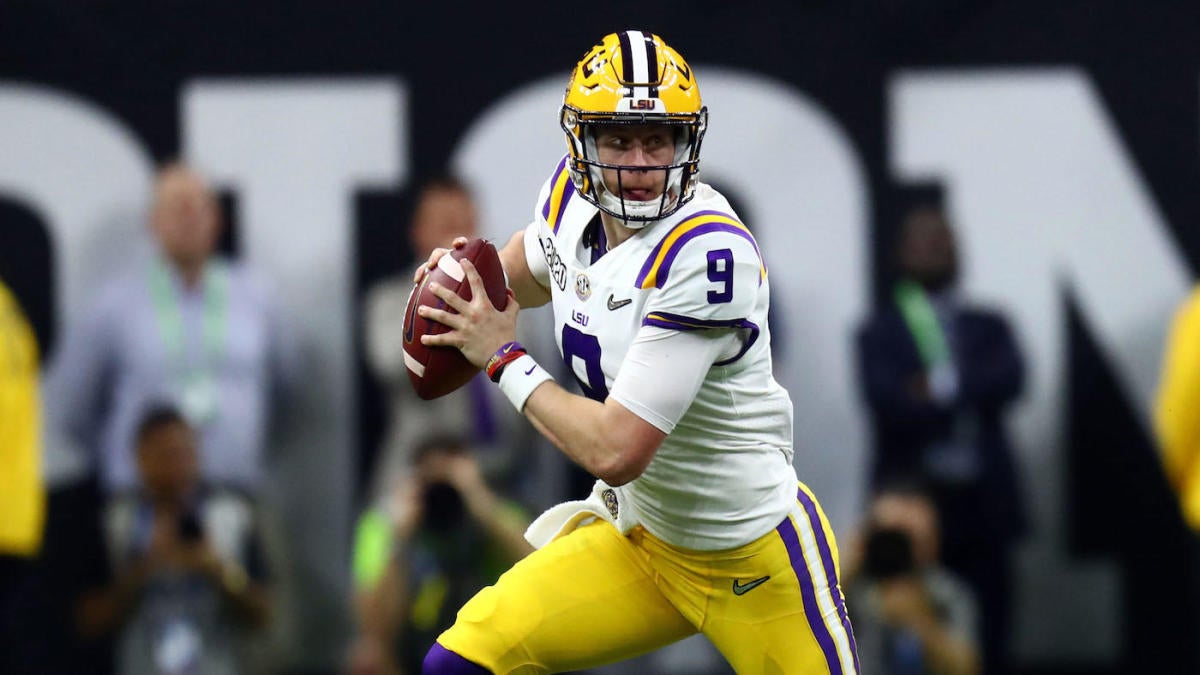 The beauty of the NFL offseason is the sprawling mass of rumors, theories and hair-brained ideas that pop up as various media members and fanbases explore endless possibilities for restructuring their roster of choice. In the modern NFL, many of these possibilities aren’t even that far-fetched. Which is why we can viably discuss the possibility of the Panthers trading the Bengals for the No. 1 overall pick in order to take Joe Burrow.

Let me preface this by saying I don’t think it will happen. The probability of it going down is extremely low. We’ll get to why in a minute. But let’s be clear: no one is reporting they will. I’ve just had enough people ask me about it and ended up having a discussion on it with Danny Kanell for Thursday’s Pick Six Podcast — listen below, subscribe here for daily NFL podcast coverage injected with plenty of mirth — after Danny tweeted about it on Wednesday.

In Danny’s mind, Burrow is going to grade out as the top quarterback prospect we’ve seen since Andrew Luck, which is indeed high praise.

“I was trying to think about which quarterback will grade above and I think it’s everybody. I think since Andrew Luck, I think he’ll have the strongest grade. When you look at Jameis Winston, Jared Goff, Baker Mayfield, Kyler Murray … now it’s not exactly a great list. Andrew Luck was the most sure-fire thing. I think he should be evaluated that way,” Kanell said on Thursday’s show. “There are going to be a lot of hot takes and people will try to knock him saying it’s a one-hit wonder. Please do not overthink this. This guy just laid down the most impressive season we’ve seen against the best competition.

“He’s got every single asset you’d want — arm strength, football IQ, athleticism. He’s probably going to run a sub-4.7 (in the 40-yard dash). He can play today’s game where you have to make some plays with your legs. So I hope people don’t overthink it and say he had all this talent around him.

“So if you’re David Tepper and you just went all in on Matt Rhule and gave him this massive contract, and then you went and got the hottest offensive mind in Joe Brady, why wouldn’t you continue to do whatever it takes?”

Why are these rumors starting?

Pretty simple, really, and it’s outlined in what Danny said above. In the wake of Joe Burrow carving up some of the best defenses in the country, including Clemson on Monday night as LSU won the national title, the Panthers dipped their hands into the college ranks and hired Joe Brady, the wunderkind passing game coordinator for LSU who helped Burrow explode onto the scene in 2019 and win the Heisman and CFP title. The connection to Brady and new Panthers coach Matt Rhule seemed a little tough to figure out, but it’s worth noting Rhule lived in College Station and played at Penn State, and Brady coached there recently before making a jump to the Saints, his last stop before LSU. Brady is 30 years old, the youngest coordinator in all football. But his previous experience with Sean Payton and New Orleans OC Pete Carmichael, coupled with his work with Burrow this year, made him one of the hottest commodities on the market this offseason. Carolina wasted no time scooping him up.

The Panthers have Cam Newton in the final year of his deal and Will Grier in the second year of his rookie contract. It’s widely believed Cam could be traded this offseason, and while Grier was a top-100 pick, he’s just a third-round selection. Oftentimes we have far too much pressure attached to any reasonably big name QB taken in the draft. (See: Bryce Petty with the Jets.) The current quarterback situation is far from stable.

If you can hire Brady and then figure out a way to grab Burrow, who looks like one of the best QB prospects to make a jump to the NFL in the last few years, it would surely make some sense to do it. They cooked at LSU, with Burrow throwing 60 touchdowns. If Carolina had the No. 1 overall pick right now, they would be drafting Burrow. It would be silly of them not to at least explore the possibility from the No. 7 spot.

Would the Bengals make this trade?

I don’t think so. Burrow is a rare prospect. In my opinion, given the Bengals’ need at quarterback, Burrow’s ascension and his status as a local player, it would be tough to bail on taking him first overall. But maybe the draft process and nitpicking over the next few months knocks him down a peg. Maybe he doesn’t want to play for the Bengals. Maybe Cincinnati really loves Ryan Finley. Maybe the Bengals want to run it back with Andy Dalton.

None of those things are likely true, but the Bengals have done weird things before. In fact, Cincy once turned down a massive haul from the Saints — their entire draft class plus future first-round picks! — to take Akili Smith instead. That worked out very poorly, so it’s possible the Bengals remember that and do in fact entertain offers from other teams.

In 2012, Mike Holmgren, then with the Browns, offered Ryan Grigson and the Colts his “whole draft” for Andrew Luck over a poolside iced tea. Grigson said no, but he wasn’t offended or anything. So, at the very least, the Bengals aren’t just going to hang up on other teams who call and ask what the price would be.

What would it cost to trade for Burrow?

Great question! My colleague Ryan Wilson already broke down the cost of moving for the former LSU star for multiple teams based on various trade charts (Ryan uses the traditional Jimmy Johnson chart, Rich Hill’s Pats Pulpit chart and Kevin Meers’ Harvard chart) out there. Check out the article, it’s fascinating to see the differences in the various charts. Here are the Panthers options:

What would it cost?

For me, it would be impossible to imagine any sort of reasonable offer for Burrow involving less than two first-round picks. The Titans “only” scored one additional first-round pick from the Rams in the Jared Goff deal in 2016, and the Browns got a similar haul back in the Carson Wentz swap.

Back in 2012, the Redskins gave up three-first round picks to move up and draft Robert Griffin III. They only went from No. 6 to No. 2 in that deal. I don’t think that’s an unreasonable place to start.

Maybe the Washington deal is the outlier. But this could be a very competitive market for quarterbacks. Six teams in the top 10 — the Bengals, Lions, Dolphins, Chargers, Panthers and Jaguars — could easily draft a quarterback with their first pick. With Tua Tagovailoa in the mix as well, there could be some pricey trades.

And again, I don’t think the Bengals will be motivated to move the way the Titans (who had just taken Marucs Mariota the year before) or Browns (firing up the analytics revolution and acquiring assets) were in 2016. It will take a lot for Cincy to get out of No. 1.

So in my opinion, we’re staring at something like:

If that strikes you as too much, well, that’s fine! It’s a lot. But I don’t believe anything short of three high-value draft picks will get a deal done with Cincinnati. This is not a Bengals franchise that operates in typical fashion. Remember, they required a first- and second-round pick from Oakland to get a 32-year-old retired Carson Palmer. You think they’re giving up Joe Burrow for less than two firsts? Come on.

My personal opinion here is that it will take three-first round picks to leapfrog the Chargers and Dolphins. If Miami gets wind of this, they can offer three first-round picks in this year’s draft. (That’s probably a story for another day, but there’s a good argument Cincy should at least consider restocking that way and that Miami should consider offering it. I would take Burrow over the Fins picks though.) So I don’t think Carolina will do it.

Tepper is trying to lean into analytics and analytics rail against coughing up tons of future assets for a single pick, even if it’s a potential franchise quarterback. Draft picks are too valuable, especially if that draft pick is next year’s first owned by a team with a questionable roster and a rookie quarterback. I can’t see it happening. But if he really wants to go all in on Brady and Burrow, it’s going to cost something in that range.

What if the Panthers included — gasp — Cam Newton or — GASP — Christian McCaffrey?

There’s some buzz out on social media about the Panthers trading the Bengals Cam, and some people are wondering if the Panthers should trade McCaffrey, the league leader in touches and scrimmage yards last year, as well. I’ll touch on the notion of trading those guys at a future time, but let’s address the Bengals’ portion of the rumor right now.

In my opinion, it is a huge longshot that they would trade either to the Bengals. Cincy already has a veteran QB from the 2011 NFL Draft with one year left on his deal (Andy Dalton) and already has a highly-drafted, multi-faceted running back from the 2017 NFL Draft who likely wants a contract extension this offseason (Joe Mixon). Cam is better than Dalton and CMC is better than Mixon, but acquiring either would be redundant for Cincinnati, unless Zac Taylor believes Cam/CMC could fix all his offensive woes. Considering the Panthers won five games last year, it’s not likely.

So does it happen?

I don’t think so. Ultimately when I look at Carolina’s roster, I see a different plan that will likely unfold here. (See: above, hit: refresh.)

Additionally, the Bengals can’t pass up a chance to take a franchise quarterback. Carson Palmer had them in the right direction before injuries derailed his career. Having the top choice with a guy like Burrow sitting there can reverse the course of your franchise if he is indeed lives up to the hype.

Carolina might have the coaches who covet him, but I don’t believe they have the desire to cough up that much capital in the pursuit of the top overall pick. It’s too expensive and it’s too risky, even if Burrow is incredible.

The match isn’t here for the Bengals and Panthers, unless Tepper, who has yet to hire his new VP of football operations, is willing to just cut loose and make it rain in order to pair Burrow and Brady. Anything is possible in today’s NFL, but I would absolutely put this notion in the longshot bin.