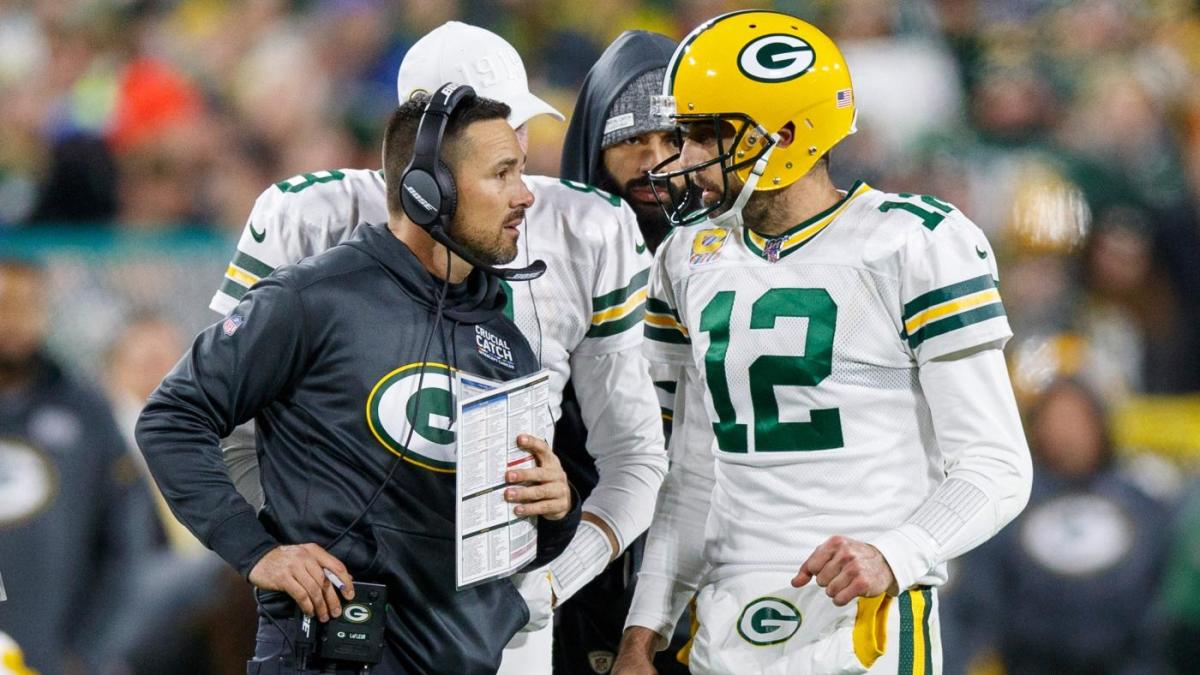 Matt LaFleur has not only helped lead the Packers to the NFC Championship Game, he is also on the doorstep of NFL history.

LaFleur, who served as the Rams and Titans‘ offensive coordinator prior to going to Green Bay in 2019, is one win away from becoming the sixth first-year head coach in NFL history to lead his team to a Super Bowl. LaFleur will look to join that small list of coaches as the Packers prepare for Sunday’s game in San Francisco against the 49ers, who defeated the Packers handily back in Week 12 by the count of 37-8.

Here’s a ranking of the first five first-year head coaches to lead their teams to the Super Bowl. We also took a look at how their teams fared in the big game.

The final head coach vacancy has been filled, and it’s time to declare winners and losers from the coaching carousel. Jonathan Jones joins Will Brinson on the Pick Six Podcast to break it all down. Listen below and be sure to subscribe for daily NFL goodness fired into your eardrums.

The defensive mind behind three of the 49ers’ Super Bowl wins during the 1980s, Seifert was promoted to head coach following Bill Walsh’s retirement following San Francisco’s win over the Bengals in Super Bowl XXIII. In 1989, Seifert presided over a 49ers team that went 14-2 during the regular season before routing the Vikings and Rams in the playoffs en route to an appearance in Super Bowl XXIV.

The 49ers, led by Joe Montana, Jerry Rice and a defense that held John Elway and the Broncos‘ offense to just 167 total yards, recorded the most lopsided win in Super Bowl history, as San Francisco walloped the Broncos 55-10 to secure their fourth championship of the 1980s.

In 1990, Seifert guided the 49ers back to the NFC Championship Game before San Francisco’s bid for a third consecutive Super Bowl win was upended by Bill Parcells, defensive coordinator Bill Belichick and the rest of the New York Giants. The loss would be the first of three NFC title game losses in a four-year span for the 49ers, who were transitioning away from many of the players that won the franchise their four Super Bowls during the ’80s.

In 1994, however, the 49ers reclaimed their spot atop the pro football landscape, winning 13 regular season games before dethroning two-time defending champion Cowboys in the NFC title game. Seifert became the eighth coach in NFL history to win multiple Super Bowls after his team dispatched the Chargers in Super Bowl XXIX, 49-26.

Two years after his second Super Bowl win, Seifert left the 49ers following the team’s second consecutive loss to the Packers in the NFC playoffs before becoming the Panthers‘ head coach in 1999. After two respectable seasons in Carolina (the Panthers went 8-8 in ’99 and 7-9 in 2000), Seifert’s team bottomed out in 2001, winning just one game before he was fired one day after the season came to an end. He remains the only Panthers coach in franchise history to have never posted a winning season or coach in a playoff game.

The first coach in history to win the Super Bowl during his first season as an NFL head coach, McCafferty, a longtime Colts assistant coach, replaced Don Shula as Baltimore’s head coach after Shula left to coach the Dolphins after the 1969 season. While they were not as strong as the Colts team that went 14-1 before being upset by the Jets in Super Bowl III, Baltimore finished the ’70 regular season with an 11-2-1 record that included a 35-0 win over Shula’s Dolphins and a victory over Joe Namath and the Jets in the final game of the regular season.

After defeating John Madden’s Raiders in the AFC Championship Game, McCafferty’s Colts survived a mistake prone game against the Cowboys that wasn’t decided until Jim O’Brien’s game-winning kick with five seconds remaining. The Colts’ 16-13 win in Super Bowl V stood as the only Super Bowl win by a Baltimore team for 30 years, until the Ravens defeated the Giants in Super Bowl XXXV.

Despite his success during the ’70 season, McCafferty was fired less than two years later after refusing to bench legendary quarterback Johnny Unitas. McCafferty quickly resurfaced in Detroit, guiding the Lions to a 6-7-1 record in 1973 before dying of a heart attack during the ensuing offseason.

Robert “Red” Miller had been an NFL assistant coach for 16 years before the Broncos made him their head coach entering the 1977 season. During his first year on the job, Miller helped spearhead “Bronco Mania,” as the Broncos developed a love affair with their fan base that continues today. Led by their famed Orange Crush defense, Denver went 12-2 during the regular season before defeating Chuck Noll’s Steelers and the defending champion Raiders in the playoffs en route to the franchise’s first Super Bowl appearance.

The Broncos’ Cinderella season came to a crashing halt in Super Bowl XII, however, as Denver’s offense — led by former Cowboys quarterback Craig Morton — was no match for the Cowboys’ Doomsday defense that included linemen Harvey Martin and Randy White. The duo shared game MVP honors that day after helping hold the Broncos to just 156 yards while forcing eight turnovers in a 27-10 victory.

Despite leading the Broncos back to the playoffs two more times over the next three seasons, Miller was fired after the Broncos underwent new ownership following the 1980 season. Miller, who compiled a 42-25 career record in Denver, never coached in the NFL again.

The Colts’ assistant coach/quarterbacks coach from 2002-08, Caldwell stepped in for Tony Dungy following Dungy’s retirement after the 2008 season. Indianapolis didn’t miss a beat under Caldwell in 2009, as the Colts won 14 regular season games behind the play of quarterback Peyton Manning, who led a Colts’ offense that finished first in the NFL in third down efficiency and second in red zone efficiency during the regular season.

After defeating the Ravens and Jets in the AFC playoffs, the Colts become the second team in Super Bowl history to relinquish a 10-0 lead, as Indianapolis was unable to keep pace with Drew Brees and the Saints in New Orleans’ eventual 31-17 victory. While Brees enjoyed an MVP performance, a surprise onside kick by the Saints to start the second half gave New Orleans momentum while changing the complexion of the game.

Two years after tying Seifert’s record for the most regular season wins by a first-year head coach, Caldwell was fired after the Colts — who were without an injured Manning for the entire 2011 season — staggered to a 2-14 record. Currently a member of the Dolphins’ coaching staff, Caldwell was the Lions‘ head coach from 2014-17, leading Detroit to a pair of playoff appearances before being fired after the Lions failed to make the playoffs after going 9-7 in 2017. Caldwell has a career regular season record of 62-50 and a postseason mark of 2-4.

Oakland’s offensive coordinator during Jon Gruden’s first stint with the Raiders, Callahan was promoted to head coach after Gruden became the Buccaneers‘ head coach before the start of the 2002 season. The Raiders, who were defeated by the Patriots in the divisional round during Gruden’s final season in Oakland, went 12-4 during Callahan’s first season as head coach. Callahan received an MVP season from quarterback Rich Gannon, who threw for nearly 4,700 yards during the regular season before leading the Raiders to postseason victories over the Jets and Titans.

Oakland’s momentum was derailed in Super Bowl XXXVII, however, as Gruden’s Buccaneers had all the answers in a 48-27 victory. Gannon threw an Super Bowl record five interceptions, with three of his interceptions being returned for touchdowns. The Raiders were unable to rebound the following season, with Callahan losing his job after a 4-12 season in 2003.

Callahan spent four years as Nebraska’s head coach before returning to the NFL in 2008. He most recently served as the Redskins‘ interim head coach after Washington fired Jay Gruden during the 2019 season.