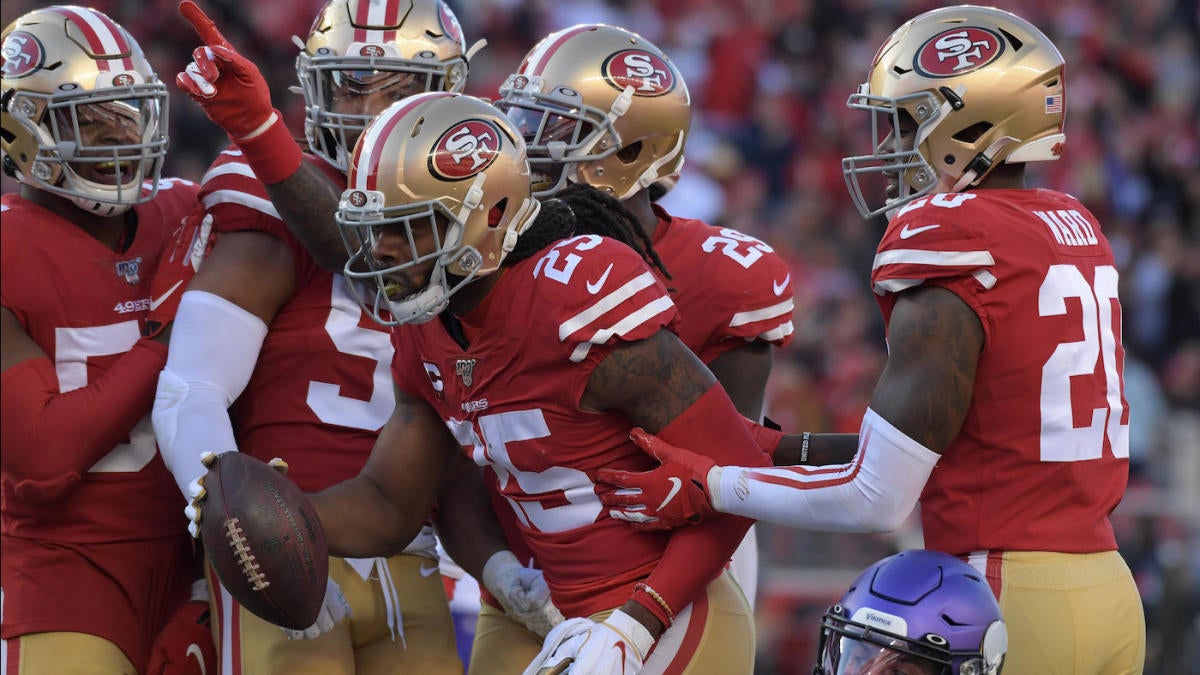 SANTA CLARA, Calif. — During the lean years here in the past half-decade, the San Francisco 49ers‘ marketing department came up with a new slogan. Playing off the fans having long been called “faithful,” the Niners created a “Faithful Then, Faithful Now” campaign.

It harkened back to the old days of Montana, Rice, Young, and those five Super Bowl championships. They wanted you to forget about those “dark years,” as left tackle Joe Staley called them this week when referring to five straight years without a playoff appearance or winning record.

Saturday, by virtue of being the NFC’s best team this season, the Niners finally got to host a playoff game in Levi’s Stadium. Now, by virtue of their 27-10 shellacking of the sixth-seeded Vikings, they’ll host the NFC title game next Sunday.

It was as well-rounded a victory as you could want for your team, with contributions from all three phases. Jimmy Garoppolo, a reserve for eight postseason games behind Tom Brady and a starter for the 49ers for the first time Saturday, played a good-but-not-great game while handing the ball off aplenty against a Vikings defense that made Drew Brees look mortal the week previous.

The San Francisco defense put Dalvin Cook in a straitjacket, holding him to nine rushes for 18 yards after having a career-high 28 carries against New Orleans. And on special teams, the Niners recovered a Marcus Sherels muffed punt late in the third quarter to eventually settle for a field goal to make it a three-possession game in the final quarter.

“When all those things are tied together and all three units are playing together like that, it makes us tough to beat.” Garoppolo said after the win.

That the Vikings bottled up George Kittle for three catches and 16 yards should come as no surprise as well as serve no omen in the future. They entered the game having allowed just one touchdown to a tight end all season, and quarterbacks had a league-low 60.3 passer rating against Minnesota when throwing to tight ends.

“If they are going to double-team George, it always opens up anybody else,” said Kendrick Bourne, who had three catches for 40 yards and a touchdown. “Whoever they double, we have so many weapons so you can’t really do any of that. If you go one way, we have an answer for that. That is the thing about (head coach) Kyle (Shanahan), he has answers for everything.”

San Francisco, finally back at full health with Dee Ford and Kwon Alexander back, held Minnesota to just seven first downs, narrowly missing out on the NFL postseason record. The 49ers were able to dictate their will as soon as they made one tweak to the defense early.

Shanahan made the quick—and correct—decision to bench Ahkello Witherspoon after just the second series of the game. Cousins was targeting him early and often after the corner’s cooking in Seattle in Week 17 led to his benching. Allowing quarterbacks a passer rating of 107.0 and receivers six touchdowns this season, Witherspoon gave up a 41-yard touchdown to Stefon Diggs in the first quarter and was replaced by Emmanuel Moseley for a second straight game.

Witherspoon made an astute point earlier in the week that he plays opposite All-Pro cornerback Richard Sherman, so of course, he’s going to be targeted more. Still, he became a liability on the field, and it’s unconscionable that Shanahan and defensive coordinator Robert Saleh start him Sunday against Aaron Rodgers or Russell Wilson. It was the right decision and Shanahan made it at the right time — in the heat of the moment.

And speaking of Sherman, he collected his fourth postseason interception (and first since January 2015) five minutes into the third quarter when Adam Thielen didn’t cross Sherman’s face which led to the ball hitting Sherman in the numbers.

Sherman didn’t go quietly into the night, either. A week after going on a Twitter tear to boast about his own contract-negotiating skills, Sherman loudly boasted about his on-field, postseason play, too.

But beyond a healthy and formidable defense led by the best corner of the past decade, what will lift the 49ers to their second Super Bowl appearance this century is what has been their calling card all year long. San Francisco entered the game running the ball on 49.2% of their plays. By the time they were up 27-10 with 12 minutes left in a game they would begin to salt away, the 49ers had 34 rush attempts (excluding a kneel down) and 20 dropbacks.

“We came in the game and said we wanted to run the ball 30 times and we were able to do that,” veteran receiver Emmanuel Sanders said. “I like the formula that we have but we’ll see how the team next week plays us. If they play the run, it’s our job to get open and make our plays. I look forward to it.”