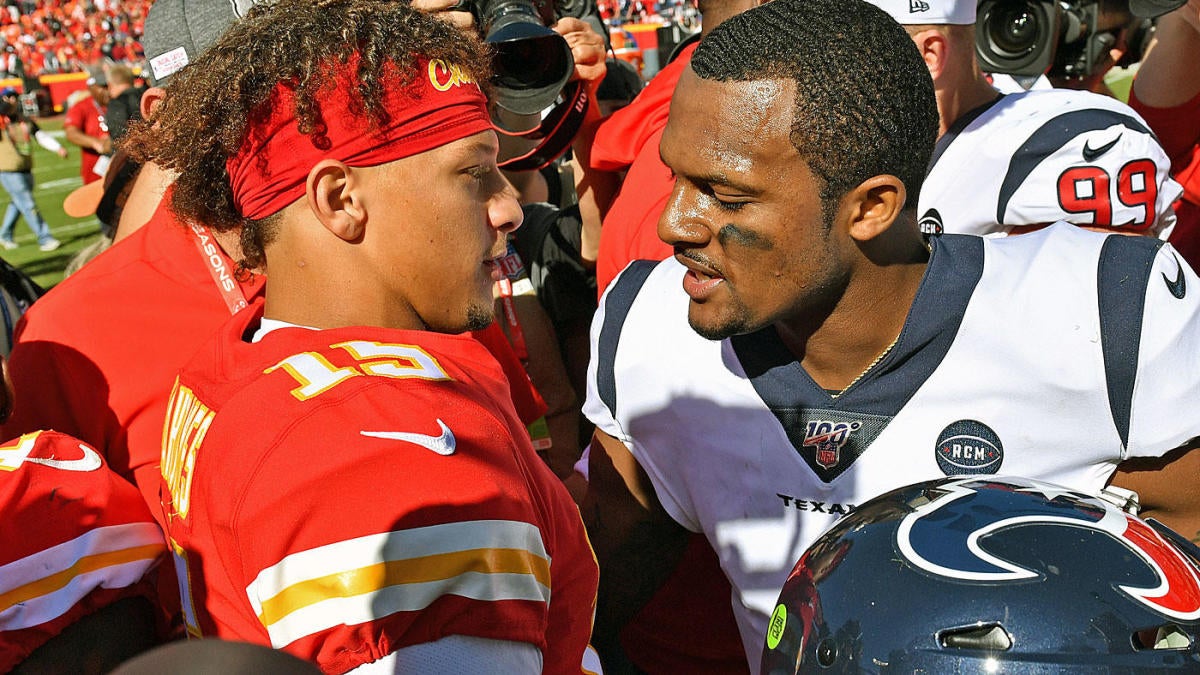 Two of the NFL’s best quarterbacks will go head-to-head on Sunday, when Patrick Mahomes‘ Chiefs and Deshaun Watson’s Texans meet up at Arrowhead Stadium. Kansas City enters as a pretty heavy favorite after Houston squeaked past the Bills in dramatic fashion in the wild-card round, but the Texans have also beaten the Chiefs once this season already.

The Houston franchise has never actually advanced past this point in the playoffs in its entire history. Before doing it just last year, the last time the Chiefs had gone past the divisional round was all the way back in 1993. If the way these two quarterbacks have begun their careers is any indication, they’ll each have plenty of chances to go far beyond this in the future, but only one can advance this time around.

When the Texans have the ball

Let’s grab a couple paragraphs from last week’s Texans vs. Bills preview, because the principle applies to this week’s game as well.

Buffalo will also heartily encourage the Texans to run the ball, keeping defenders out of the box and presenting the Texans with what looks like a numbers advantage. The Bills dropped an eighth man into the box less often than just about any other team in football this season, and they were willing to concede the run if it meant being able to prioritize stopping the pass. That’s a big reason Buffalo ranked only 18th in run defensive DVOA this season, compared to fifth against the pass.

But the Bills were excellent situationally in the run game. They allowed the league’s seventh-lowest conversion rate in power situations (third or fourth down, two or fewer yards to go), per Football Outsiders, and they stopped 25 percent of opponent rushing attempts at or behind the line of scrimmage, the fourth-highest mark in the league. Again, if Bill O’Brien decides he would rather put the game in the hands of Carlos Hyde than Deshaun Watson, the Bills will gladly take that tradeoff and let the Texans run Hyde for four or so yards a pop to their collective hearts’ content. That’s exactly the kind of game they want to play anyway.

The Chiefs, like the Bills, were far better against the pass than the run this season. Kansas City ranked sixth in the league in pass defense DVOA and just 29th against the run. But also like the Bills, the Chiefs are pretty OK with that. Their style of defense encourages the opposing offense to run the ball, because they’d rather just concentrate on taking away the pass.

Is there any team in the NFL that wouldn’t rather the Texans try to win the game by handing it off to Carlos Hyde a bunch of times than asking Deshaun Watson to work his magic? Of course not. Everybody would rather Bill O’Brien indulge his desire to Establish The Run. He indulged it for much of the game against the Bills last week, and Watson ended up bailing him out down the stretch, because that’s just what he does. I have some bad news for him, though. If he tries to do the same thing against the Chiefs, he’s going to have a more than 16-point deficit to get back in the game, and the opponent will probably manage to score again before the final 10 seconds of the fourth quarter.

Who wins Texans vs. Chiefs? And what critical x-factor makes one side a must-back? Visit SportsLine now to see which side of the spread you should be all over on Sunday, all from the expert who’s 18-7 on picks involving these teams.

Putting the ball in Watson’s hands early and often, despite the fact that the Chiefs’ pass defense is playing extraordinarily well, simply has to be part of the plan. That will obviously work out far better for the Chiefs if Will Fuller is able to get on the field than if he remains out. Fuller has been limited in practice throughout this week, and there is legitimate question surrounding his status at the moment. Watson’s splits with and without Fuller are dramatic, and that carried over to last week’s game until he decided to go supernova down the stretch. From a couple weeks ago:

Fuller was on the field the last time these two teams played, and he even had nine targets, but the Texans made a clear effort to orient their passing game around extremely short passes to DeAndre Hopkins, who had nine grabs for just 55 yards in that contest. As we wrote in our Watson-Hopkins breakdown, that type of strategy worked fine in that one specific game, but it seems unlikely to be the way the Texans find their way through the AFC playoffs. Kansas City had an excellent pass defense overall, but the Chiefs did allow a ton of deep completions this year: per Sports Info Solutions, only the Buccaneers allowed more completions on throws at least 20 yards downfield. With safety Juan Thornhill sidelined due to injury, those opportunities might even be easier to take advantage of than before.

This season’s Chiefs offense was not quite as unstoppable as last year’s version. Some of that is because Patrick Mahomes missed several games due to injury. Some of it is because Tyreek Hill and Sammy Watkins did as well. Some of it is because Eric Fisher, Andrew Wylie, and Laurent Duvernay-Tardif and Damien Williams and LeSean McCoy did, too. And some of it is just because the likelihood of any team’s offense being quite as good as that of the 2018 Chiefs was pretty damn low. There’s only one other offense in the history of football (the 2013 Broncos) that scored at least as many points (565) and gained at least as many yards (6,810) as that group, after all.

Of course, that doesn’t mean this season’s group was any slouch. The Chiefs, despite being all those players for all those games, ended the season ranked sixth in the league in total yards, fifth in points, second in yards per play, third in yards per drive, second in points per drive, second in the percentage of drives that ended in a score, and third in overall offensive DVOA. Folks, these guys are still really damn good.

At least in this game, we have a pretty good idea of what the passing game will look like. Hill and Watkins are healthy. Travis Kelce is still there. Demarcus Robinson will work in heavily as the No. 3 wideout, but speedster Mecole Hardman will get on the field for a bunch of snaps as well, with the Chiefs almost guaranteed to get him the rock on a jet sweep or a deep ball at some point. The Texans, put simply, are not really equipped to deal with this pass offense. Houston ranked 26th in the NFL in pass defense DVOA this season, with a particular weakness against short passes (30th) and throws over the middle of the field (32nd).

Jonathan Joseph has been limited in practices this week. Gareon Conley had a solid game against the Bills a week ago, but struggled for just about the entire regular season. Vernon Hargreaves was even worse during the year. Are we expecting those guys to hang with this Chiefs wide receiver corps? If so, that’s probably misguided. In the first matchup between these two teams, Mahomes was in the process of lighting the secondary on fire before he re-injured the ankle that had been injured the previous week, after which he struggled for the rest of the afternoon.

Houston is not all that much better equipped to deal with Kelce. The Texans did rank 15th in DVOA against throws to tight ends this season, but again, they were dead last on throws over the middle. That’s where Kelce does his damage. He has an athleticism advantage over just about every linebacker and a size and strength advantage over just about every safety. The Chiefs move him around the formation and Andy Reid schemes him open and he is as dynamic as it gets with the ball in his hands.

Whether or not Houston has a chance to slow this machine down comes down to — as usual — whether they can manage to get some pressure on Mahomes. The kind of pressure that results in him being knocked to the ground before he gets rid of the ball is the only kind that works, though. Mahomes is not a Lamar Jackson-style rushing threat, but he is a fantastic scrambler and just about the best passer in the league when he’s on the move. J.J. Watt made a couple splash plays last week, but he was not his usual self out there for most of the game. The Texans need more than that from him this time around, and more from Whitney Mercilus, D.J. Reader, and the rest of the defensive front.

Kansas City does not have much use for the run game more often than not, but it’ll be interesting to see how Reid and Eric Bienemy rotate the running backs. Williams has been the team’s best option for most of the year, but the Chiefs did keep insisting that they were resting McCoy to save him for the playoffs. Will that actually be the case? Williams is clearly the better back at this point, especially in the passing game, which is what the Chiefs want to lean on anyway.