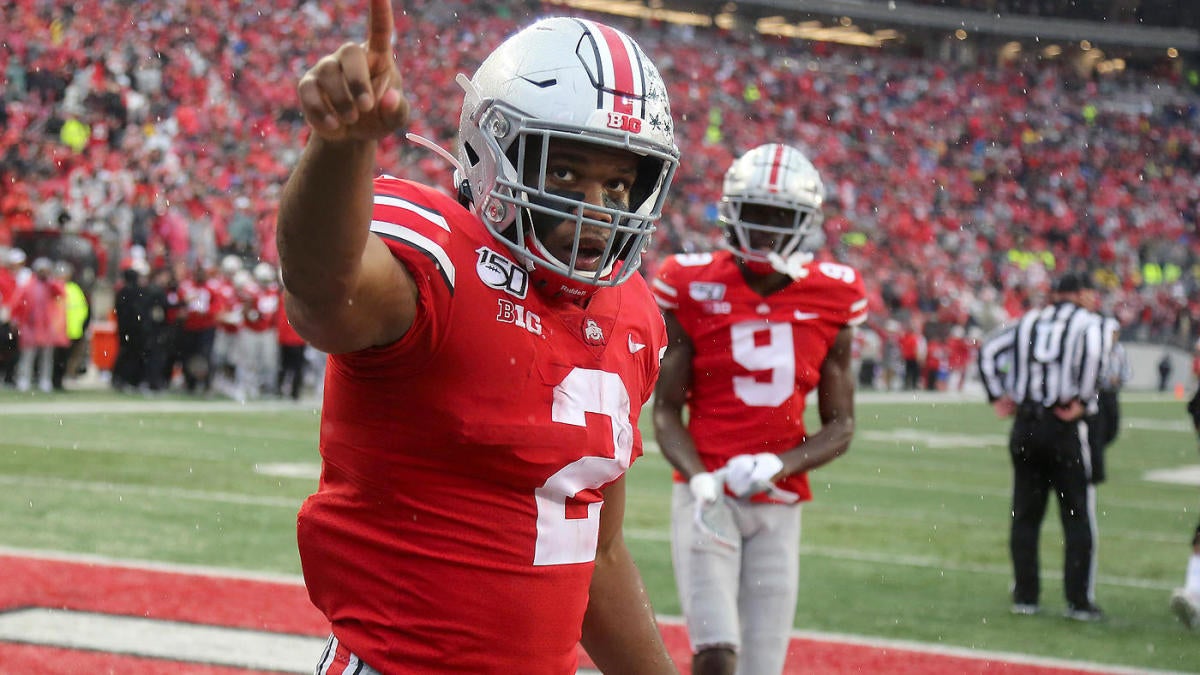 NFL fans are familiar with the names that have sat atop the list of 2020 NFL Draft running back prospects: Georgia’s D’Andre Swift, Wisconsin’s Jonathan Taylor and Clemson’s Travis Etienne. There is a lengthy list of talented backs behind them. New names will surface through the Reese’s Senior Bowl, NFL combine and other pre-draft opportunities.

The league values prospects capable of toting the rock and nabbing passes out of the backfield. Balance through contact is a desirable trait as well. CBS Sports has a list of prospects that have caught the attention of NFL talent evaluators — good or bad — during the 2019 season.

Dobbins had a fantastic season proving all of his doubters wrong. He displays great balance through contact as well as an ability to make an impact in the passing game. The Texas native runs good routes and is able to regulate his speed. Ohio State loved utilizing him on stretch plays this season to create running lanes. There are a few concerns remaining: Dobbins is average in pass protection and has accumulated significant wear on his legs over the past three seasons.

Harris has been behind Damien Harris and Josh Jacobs over the past few years. He looked like a physical player with average to below average speed. In 2019, he received a larger workload and was productive. His athleticism was on display with countless hurdles and his involvement in the pass game was a huge bonus. The California native had a nose for the end zone this season, compiling 20 touchdowns. He has grown up from the comparison of a poor man’s Derrick Henry.

Hill is an overall good running back. He has good enough speed when he hits open turf but his patience, vision and agility allow him to get to those green spaces. The Mississippi native has good hands and plays with a mean spirit. He is tough. The junior has already declared for the 2020 NFL Draft. There is currently a third round grade on Hill.

Entering the season, Sermon was one of the more anticipated running back prospects. He was a dual-threat athlete capable of making a difference in the run and pass games. The Georgia native showed speed and agility. He suffered a season-ending injury that would require surgery late in the season but he was mysteriously receiving fewer and fewer carries as the season progressed. It made little sense unless he was bothered by an injury. There was never any public acknowledgement. He has not officially declared for the 2020 NFL Draft.

McFarland was a bit like Vanderbilt’s Ke’Shawn Vaughn this season in the sense that he was inconsistent. There are games when he cannot be stopped (i.e.: Ohio State 2018 and Michigan State 2019) and games where he is only able to manage a few yards per carry. He should test well at the NFL combine and that will help his stock. The Maryland native has been moderately effective catching passes as well. The junior has already declared for the 2020 NFL Draft.

Anderson began his senior season on a tear, recording 100 rushing yards in three of his first four games. His production quickly plummeted thereafter though. He averaged 42.5 rushing yards in the final eight games. Anderson is a physical back capable of breaking tackles. He is not a liability catching passes but he was not overly explosive in that arena either. The Texas native is patient and displays good vision.

Benjamin is an explosive player that makes an impact on the ground and through the air. He displays good balance and body control. The Texas native is not great in pass protection but that has not been his biggest issue. NFL teams will have a larger problem with the number of fumbles (6) that he had this season. He accumulated a lot of wear on his legs by being a high volume carrying as well.

Vaughn is originally from Nashville but he transferred in from Illinois. He is the best example of a boom or bust prospect in this draft class. There are moments when he shows good lateral quickness and burst. Other times, he has been less consistent. The Tennessee native is physical and does an average job catching passes out of the backfield. The Commodores had a long season and that likely impacted his play.

Likely to be forgotten until the combine

Akers has been one of my favorite running backs to study in this class. He is explosive and patient. He is solid in pass protection and capable of catching passes downfield. Despite his compact build, he can improve his lower body strength. His production was hindered a bit by Florida State’s offensive line play. The Mississippi native should test well at the NFL combine. Fumbles have been an issue with him.

Dallas is a bit smaller in stature compared to his peers but he is very explosive. Fans were able to see that in their matchup against Florida. He averaged six yards per carry this season but was not a huge contributor through the air. The NFL combine is right up his alley after competing in sprints and the long jump in high school.