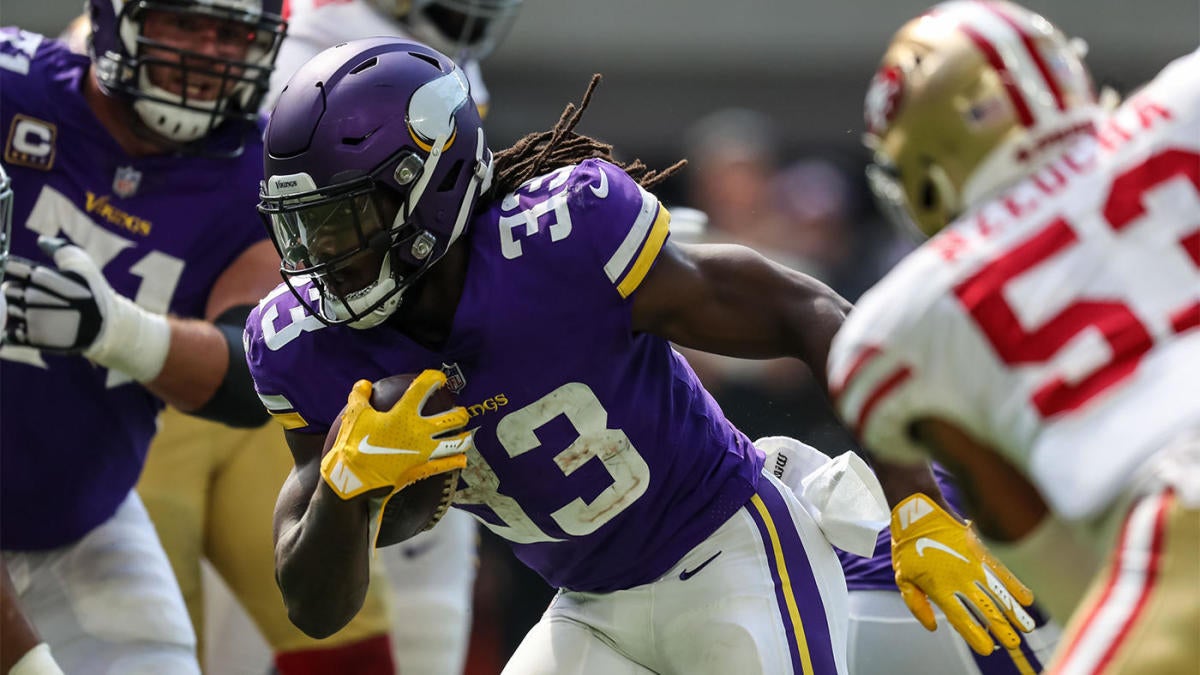 Eight teams remain in the hunt for a Super Bowl title as we head into the divisional round, where the first matchup pits one of two No. 6 seeds to pull off the upset in the first round against the No. 1 seed in the NFC.

The 49ers have home-field advantage by the slimmest of margins, winning a three-way tiebreaker with the two other NFC teams to own a 13-3 record. The 13-3 team stuck playing on Wild-Card Weekend, the Saints, fell in the first round to the 49ers’ divisional-round opponent, the Vikings. It took overtime for the Vikings to pull off the win, and just six days later they have to head to the West Coast and try to do it again against a San Francisco team that has been leading or tied with six seconds left in regulation in all three of their losses this season.

“The Vikings have a major disadvantage here, having played Sunday on the road and now back out on the road against a team with rest. The 49ers earned that right of the top seed, but it’s a big edge for them. Even so, I think the Vikings will hang around here. The Minnesota defense came up big against the Saints and should have success slowing the 49ers. But the San Francisco defense is special. Dare I say it: I still think Kirk Cousins and Dalvin Cook get the best of it on this day. Upset special.” — Pete Prisco on why he’s taking the Vikings to win 20-16

“One of many regrets from Wild-Card Weekend was me not picking the Vikings to beat the Saints outright. I knew it was possible, I just didn’t believe. Now I might be making another mistake, but I think the Vikings can hang here too. … This is just the sixth time since 1990 (the current playoff format) we’ve seen both No. 6 seeds advance on Wild-Card Weekend, including 2005, 2008, 2010, 2013 and 2018. However, we haven’t actually seen a No. 6 seed beat a No. 1 seed in the following week since the 2010 Jets toppled the Patriots back in the halcyon Kiss the Ring days of Rex Ryan vs. Bill Belichick. The Vikings profile fairly similarly to that Jets team, with a better offense. I’ll take my chances they keep it close and cover.” — Will Brinson on why he thinks the Vikings cover

Who wins 49ers vs. Vikings? And what critical X-factor makes one side a must-back? Visit SportsLine now to see which side of the spread you should be all over Saturday, all from the expert who’s 10-1 his picks involving San Francisco.

“The matchup here likely comes down to which of the groups in the trenches can win the day. The 49ers ranked eighth in the league in Football Outsiders’ Adjusted Line Yards this season, indicating that they got consistently strong blocking up front. They were a bit less successful in power situations (third or fourth down with two or fewer yards to go), ranking 14th with a 67 percent conversion rate. … When we get to the outside, the speed of the San Francisco offense provides an advantage. Minnesota is down several top cornerbacks now, with only Xavier Rhodes still ‘healthy’ among the starters, and even he suffered a shoulder injury that clearly bothered him throughout last week’s game. Deebo Samuel and Emmanuel Sanders should thus have plus matchups all game. ” — Jared Dubin, who’s taking the 49ers to win 24-20, in his in-depth preview of the game

“The Vikings answered a lot of questions by going into New Orleans as 7.5-point underdogs and beating the Saints. They beat them because — in addition to Cousins heating up as the game progressed — their defensive front was able to win against the Saints’ offensive line. Defensive ends Everson Griffen and Danielle Hunter combined for three sacks. What’s notable is that the Saints and 49ers finished the regular season with nearly identical pass-block win rates — a metric that is used to measure pass protection. So, Griffen and Hunter should be able to do it again. And it’s not like Santa Clara affords the 49ers the same kind of home-field advantage that the Superdome gives the Saints. In short, I think this is a more even game than the line suggests. The Vikings are now 3-0 against the spread when they’re underdogs by 3.5 points or more. In a game between two evenly matched quarterbacks and two good defenses, I’ll take the Vikings to keep things close against the 49ers.” — Sean Wagner-McGough on why he’s taking the Vikings to cover

“The quarterback with the bigger question marks in this game might actually be Garoppolo. For one, he’s making the first playoff start of his career, which hasn’t worked out so well for quarterbacks over the past six years. Since 2013, quarterbacks have gone 6-17 when they’re making their first postseason start, including 1-2 this year. The good news for the 49ers is that it might not matter whether or not Garoppolo struggles this week, because they shouldn’t really need him to throw the ball. The 49ers rushed for the second most yards in the NFL this year (behind only Baltimore) and now they’ll be going up against a Vikings defense that gave up more than 105 yards per game.” — John Breech on why he has the 49ers winning 26-23

The SportsLine Projection Model, which simulates every NFL game 10,000 times, is up over $7,000 for $100 players on its top-rated NFL picks since its inception four-plus years ago. Its biggest edge in this game comes on the total, with one side cashing in 52% of simulations. See the model’s spread, total and moneyline plays only at SportsLine.

“As soon as the Vikings upset the Saints on Sunday, I decided I was going to take them to advance to the NFC title game. But then I reconsidered Kyle Shanahan’s offensive strategy and weapons (translation: I got scared) and decided otherwise. That, of course, doesn’t even account for San Francisco’s vaunted defense, which has the talent to get after Kirk Cousins. In reality, Minnesota should still be competitive here. Dalvin Cook looked fresh as ever in New Orleans, and the Niners are more vulnerable to surrendering points than people realize. Jimmy Garoppolo is also bound for some playoff hiccups. Still, the 49ers are better coached and well-rounded.” — Cody Benjamin on why he has the 49ers winning 27-23

“The Vikings look like a candidate to make a deep postseason run, but the 49ers are the No. 1 seed in the NFC for a reason. Jimmy Garoppolo passed for 3,978 yards this season — the most passing yards a 49ers quarterback has recorded since Jeff Garcia went for 4,278 in 2000. He has some incredible weapons in George Kittle, Emmanuel Sanders and Deebo Samuel, and also has a couple of great running backs in Tevin Coleman and Raheem Mostert. Seven points seems like a large spread to me, and I was very impressed with what I saw from Minnesota last weekend. I’ll take the 49ers to win but not to cover the point spread.” — Jordan Dajani on why he’s taking the 49ers to win 27-24

Why to take Vikings

Why to take 49ers