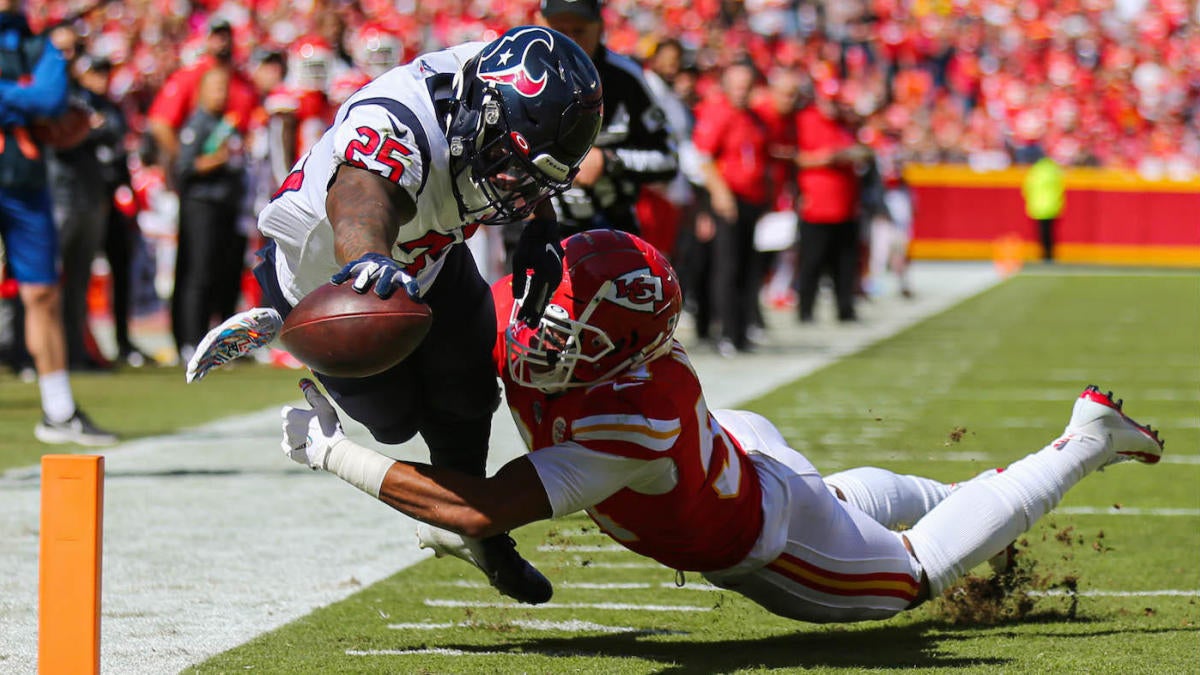 Most road teams in the divisional round enter their matchups truly uncertain if they can pull off the upset in hostile territory. The Texans have no such trepidation, having gone into Arrowhead Stadium and beaten the Chiefs back in October. How did the Texans do it? Simple: they kept Patrick Mahomes and Co. off the field. Houston held the ball for nearly 40 minutes in the game, and that helped limit the Chiefs to just 24 points while getting the ball only three times after halftime.

Houston will probably try and execute a similar gameplan in their return trip to Kansas City, but it should be much harder to pull off this time around, as the Chiefs defense has stepped up since that game, particularly after their bye. Coming out of that Week 12 break, the Chiefs allowed just 52 points in their final five games, clinching the No. 2 seed on the final day of the regular season and giving Andy Reid two weeks to prepare for the playoffs.

“The last time the Chiefs played Houston, Patrick Mahomes was playing on a bum foot and they were missing a lot of key players. Andy Reid’s record off a bye is outstanding. During their six-game win streak, the Chiefs have allowed 11.5 points per game. Houston’s secondary will not be able to deal with Travis Kelce and Tyreek Hill. No way. Houston is coming off an exhausting overtime game and didn’t really deserve to win last week, while K.C. is rested. Lay the points.” — Hammerin’ Hank Goldberg on why the Chiefs are one of his best bets, which are 17-4 in the last seven weeks over at SportsLine

“This is a matchup between two of the best young passers in the league. The Texans beat the Chiefs earlier this season, but the Chiefs defense is much improved. That will show up in a big way. The Texans defense has major issues, which is why I think Patrick Mahomes will light them up. Look for a big game from Mahomes as he outplays Deshaun Watson.” — Pete Prisco on why he’s taking the Chiefs to win 33-23

“Andy Reid, off the bye! Andy Reid, off the bye! A song from the past can hint at the future in certain cases, and I love the Chiefs here. The Texans already beat Kansas City once, but I don’t think they’re necessarily capable of doing it a second time in a single season. Additionally, the Texans were at full force in that game and the Chiefs were not — Patrick Mahomes was battling an injury, the offensive line was banged up and the defense wasn’t nearly as good as it is now. The Chiefs are the team in football no one is talking about, in my opinion. If Mahomes plays the next three weeks the way I believe he has played over the last seven weeks, the Chiefs will win the Super Bowl.” — Will Brinson on why he thinks the Chiefs cover

Who wins Texans vs. Chiefs? And what critical X-factor makes one side a must-back? Visit SportsLine now to see which side of the spread you should be all over Sunday, all from the expert who’s 18-7 on picks involving these teams.

“The Chiefs’ improved defense is one reason why I like them to breeze past the Texans. Obviously, though, it’s mostly about Patrick Mahomes and the rest of the Chiefs’ offense. The Texans were extremely fortunate a week ago to only be down 16-0 in the third quarter due to the Bills’ inability to finish drives with touchdowns, which gave them a chance to come roaring back. I don’t think the Chiefs, against the seventh-worst defense by DVOA, will let the Texans hang around if the Texans start slow again. The Chiefs are capable of putting the game out of reach in the early going. I think we’re going to see Mahomes have a huge game against a bad Texans defense, the Chiefs defense demonstrate just how much it has improved over the course of the season, and the Chiefs run away with a big win.” — Sean Wagner-McGough on why he’s taking the Chiefs to cover

“Although the Chiefs’ playoff history frightens me, there’s no way I can pick against them in this game, because I think they’re just the much better team. Now, Texans fans, I know what you’re thinking, and yes, I’m well aware that Houston won 31-24 in Kansas City back in Week 6, but I’m not really going to put too much stock in that game. For one, the Chiefs didn’t have Chris Jones (who ended up leading the team in sacks this year), they didn’t have their starting left tackle (Eric Fisher), Patrick Mahomes played more than half the game with a gimpy ankle (He’ll have an extra week of rest this time around thanks to the bye) and Tyreek Hill played on a limited snap count because he was coming off an injury (but still managed to torch Houston for 80 yards and two touchdowns even though he was only on the field for roughly half of Kansas City’s offensive snaps in the game).” — John Breech on why he has the Chiefs winning 31-17

The SportsLine Projection Model, which simulates every NFL game 10,000 times, is up over $7,000 for $100 players on its top-rated NFL picks since its inception four-plus years ago. Its biggest edge in this game comes on the total, with one side cashing in 51% of simulations. See the model’s spread, total and moneyline plays only at SportsLine.

“A lot of people, myself included, had no problem riding with the underdog in the Texans’ first playoff game, but Houston took advantage of Josh Allen’s blunders to discard the Bills. This time around, it won’t be as easy. Deshaun Watson always makes things entertaining, and Houston has film on K.C. from earlier this year. But the Chiefs, at home, with Patrick Mahomes healthy and Steve Spagnuolo’s defense actually heating up? I can’t stretch myself far enough to predict a Texans upset here. This one’s Andy Reid’s to lose, even if the 9.5-point spread seems a touch high.” — Cody Benjamin on why he has the Chiefs winning 31-24

“Deshaun Watson orchestrated an incredible comeback against the Bills last week, but the Texans get one of the hottest teams in the NFL in the divisional round. The Chiefs have won their last six games and are motivated to make it to the Super Bowl after losing in overtime last year in the AFC Championship Game. Patrick Mahomes became the first quarterback to pass for 4,000 yards and 25 touchdowns in consecutive seasons in franchise history, and he has some incredible weapons in Travis Kelce and Tyreek Hill. The Texans and Chiefs faced off in Week 6, and Houston actually pulled off a seven-point victory in Arrowhead. … While the Texans managed a road victory earlier this season, I expect the Chiefs to flip the script on Sunday. Kansas City has looked like one of the better teams in the league over the past few months, which is why I’m taking them to cover the large 9.5-point spread this weekend.” — Jordan Dajani on why he has the Chiefs winning 35-24

Why to take Texans

Why to take Chiefs