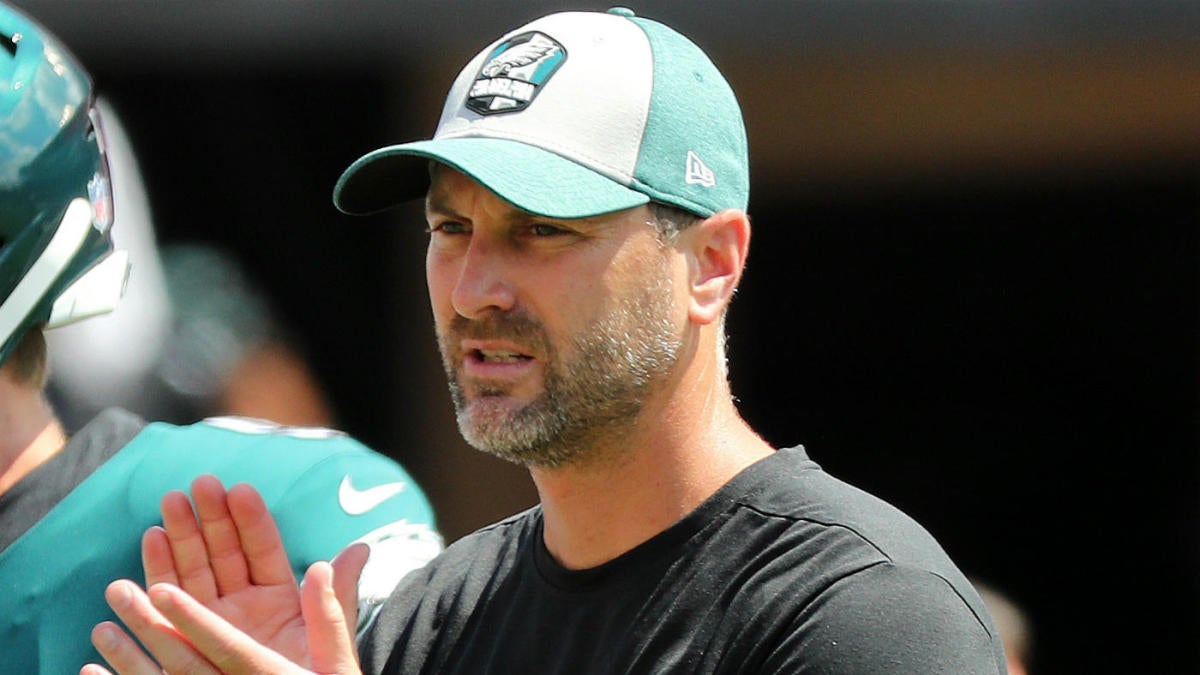 The Philadelphia Eagles will part ways with offensive coordinator Mike Groh and wide receivers coach Carson Walch, as first reported by CBS Sports’ Jonathan Jones. Groh and Walch’s departure comes just one day after Eagles head coach Doug Pederson indicated both coaches would be back in his season-ending press conference.

Pederson released a statement apologizing for the confusion during Wednesday’s media session.

“After much consideration and discussion, I have decided to make a change at the offensive coordinator and wide receivers coach positions,” Pederson said. “It was not an easy decision for me to make and I appreciate everything that Mike Groh and Carson Walch contributed to the organization and my staff. As I said yesterday, they were a big part of our success down the stretch this past season. This is one of the most difficult parts of the job and something that weighs on me, but ultimately I have to make decisions that I believe are in the best interest of the football team moving forward.”

Pederson also apologized to defensive coordinator Jim Schwartz after he didn’t commit to retaining him in that role on Wednesday. Schwartz had an interview for the Browns vacant head coaching position earlier this week and is a finalist for the job.

“I apologize for any confusion that I created during (Wednesday’s) press conference, including my comments on Coach (Jim) Schwartz, who has done a great job as our defensive coordinator. It was my intent not to comment on any of my staff during the ongoing evaluations because I wanted to be able to go through the process and communicate any decision directly with the individuals. I did a poor job of explaining that the first time I was asked. I will continue to evaluate everything and consider all possibilities to improve our football team.”

Pederson raised some eyebrows on Wednesday when he committed to Groh and Walch for the 2020 season, praising them for the work they did with a depleted Eagles roster.

“I think both of those guys did an outstanding job for me this year,” Pederson said. “There were a lot of things we faced on offense as you know, through adversity, through injury, through many different facets of trying to get the pieces together.

“So my hat goes off to both of those gentlemen because of the game plans that Mike and I and the offensive staff put together, first of all. Then here towards the end of the season, Carson Walch having a big impact on getting these young players ready to go and to play at a high level. That’s not easy.

“For guys to basically come off our practice roster, who were within weeks of being on our roster or being on the practice squad, to be elevated to game status, it’s not easy to do, and these two gentlemen did an outstanding job for me, for the team, and really put us in a position to be in the postseason here at the end of the year.”

The Eagles offense has taken a hit in the two years under Groh, who was the successor to Frank Reich (was hired by the Indianapolis Colts after the Eagles won the Super Bowl). In Groh’s first season as offensive coordinator in 2018, Philadelphia finished 18th in points per game (22.9) and 14th in yards per game (365.3). The Eagles were 15th in yards per play (5.6), 12th in third-down conversion rate (40.98 percent) and 17th in red-zone scoring percentage (57.89 percent). Philadelphia finished 28th in the league in rushing (98.1 yards per game) and seventh in passing (267.2 yards per game).

Year 2 wasn’t any better. The Eagles were 15th in points per game (23.2) and 14th in yards per game (356.1). The Eagles were 21st in yards per play even though they finished fifth in third down conversion rate (44.58%). Philadelphia finished 11th in the league in rushing (121.1 yards per game) and 15th in passing (235 yards). This with the Eagles playing the majority of the second half of the season without their top three receivers and No. 1 running back. Philadelphia was also banged up on the right side of the offensive line by the time the playoffs arrived, a game which the Eagles scored just nine points in a loss to the Seahawks.

Groh paid the price for the Eagles’ offensive ineptitude.

It will be interesting to see if the Eagles go back to former assistant coach, and more recently former New York Giants head coach, Pat Shurmur to fill a now-vacated role on Philadelphia’s coaching staff.