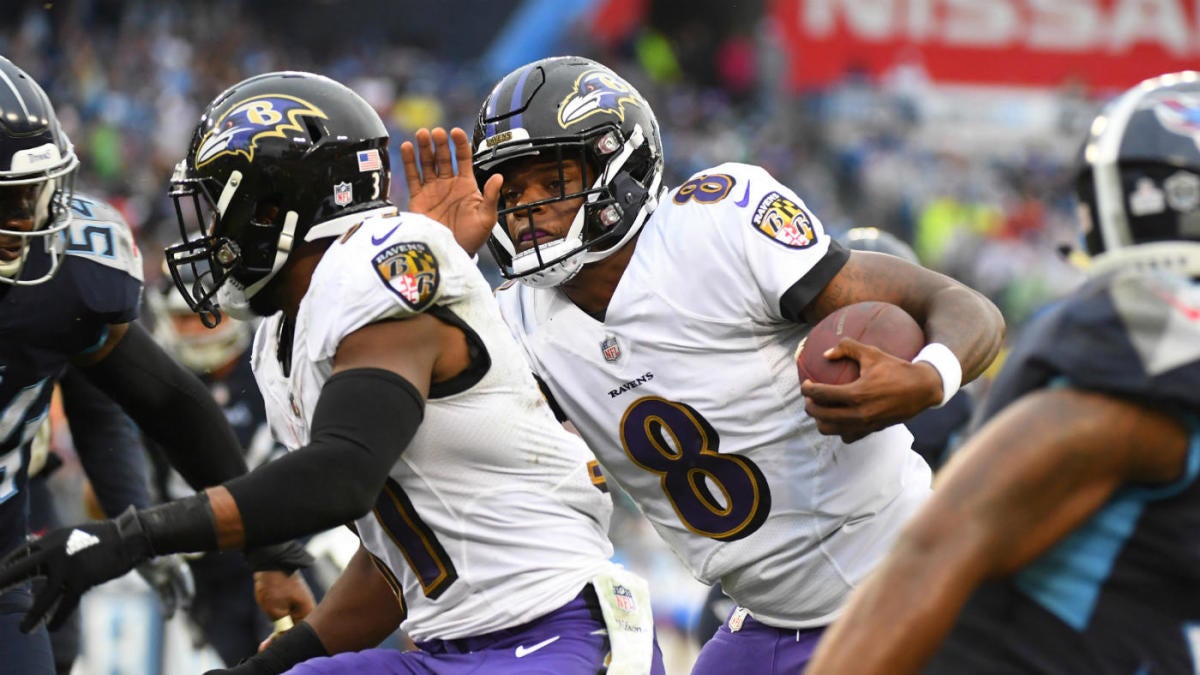 The Titans went into Foxborough and shocked the Patriots to advance in the wild-card round, and now they’ll face an even tougher test if they want to reach the AFC Championship Game: the Baltimore Ravens, owners of the best record in football and a team that has been a juggernaut for much of the season.

The 14-2 Ravens bring a 12-game winning streak into this matchup, and though it’s their No. 1-ranked offense that has drawn much of the attention for their success, the step forward taken by the Baltimore defense after giving up 500-plus yards in back-to-back September losses is what truly made the team unbeatable over the last three months of the season. The Ravens defense didn’t give up even 350 yards of offense in any matchup after that two-game slump, so the upstart Titans certainly have their work cut out for them to pull off a second straight major upset in the postseason.

“This should be an old-fashioned slugfest, featuring two teams that want to pound the football. The Titans do it with powerful Derrick Henry running the ball, while the Ravens do it with Lamar Jackson keying the run offense. Whichever defense can stop the run the best is the team that wins the game. I think that’s the Ravens. But it will be close. Look for a tough, physical game with the Ravens finding a way late.” — Pete Prisco on why he’s taking the Ravens to win 21-17

“This is one where I would probably want to get the full 10 points if I’m taking the Titans. The Ravens are terrifying. They won 12 games to close out the season, their last loss coming against the Browns, when they gave up a 40-burger to Cleveland. Lamar Jackson has played in the playoffs before. He lost last season and got booed at home — people wanted Joe Flacco to jump in and replace him! — so he’s not a rookie here. … But the Titans are well-coached and have explosive potential on offense and a defense that could, in theory, limit the run game for Baltimore. I think they keep it close, but it’s scary getting in front of this freight train.” — Will Brinson on why he thinks the Titans cover

Who wins Titans vs. Ravens? And what critical X-factor makes one side a must-back? Visit SportsLine now to see which side of the spread you should be all over Saturday, all from the expert who’s 9-1 on picks involving Baltimore.

“I can’t say this for sure, but if Ravens coach John Harbaugh could have hand-picked his opponent out of any of the AFC wild-card teams, I have to think that the Titans would have ranked dead last on his list of teams he wanted to play, and that’s because, if the Ravens struggled with one thing this year, it was stopping the run. … It’s hard to put into perspective how good Henry’s been recently, so just consider this: Henry has 1,078 yards over his past seven games, which is insane when you consider that a 1,000-yard season is considered a good YEAR for a running back, Henry has that in SEVEN GAMES. That 1,078 yards would put him on pace for 2,464 yards over a 16-game season, which would smash the NFL record.” — John Breech on why he has the Titans winning 27-24

“Hats off to the Titans for defying the odds once again and knocking out the Patriots. Ryan Tannehill, Derrick Henry, Mike Vrabel — they’ve all been proving people wrong, and then some. The train’s going to stop in Baltimore, however. Yes, Tennessee is good at controlling the clock, but the Ravens are even better. It’s almost tiring to reiterate Lamar Jackson’s dynamic abilities at this point, but let’s do it anyway: He’s a downright marvel. John Harbaugh’s aggressiveness should help No. 8 keep the ball in his team’s hands, and the Ravens will be bound for the AFC Championship with this year’s most impressive athlete under their center.” — Cody Benjamin on why he has the Ravens winning 29-21

The SportsLine Projection Model, which simulates every NFL game 10,000 times, is up over $7,000 for $100 players on its top-rated NFL picks since its inception four-plus years ago. Its biggest edge in this game comes on the total, with one side cashing in 55% of simulations. See the model’s spread, total and moneyline plays only at SportsLine.

Why to take Ravens