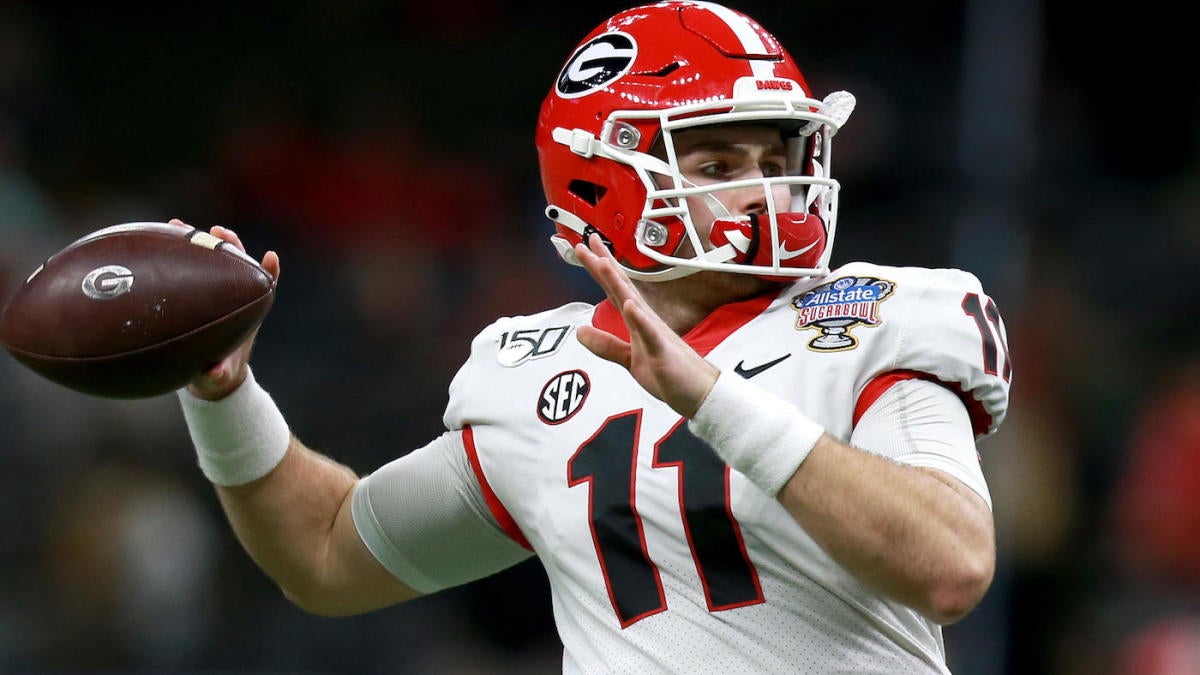 On Wednesday, Jake Fromm became the latest quarterback to declare for the NFL Draft, announcing his intentions to leave Georgia after three seasons:

Fromm held down the starting job for the Bulldogs since 2017, despite competition from Justin Fields and Jacob Eason, who transferred to Ohio State and Washington, and have had their own success; Fields was a Heisman Trophy finalist in December, and Eason has also chosen to enter the draft after one season for the Huskies.

Fromm leaves Georgia with a 36-7 record, a 63.3 completion percentage for 8,236 yards, with 78 touchdowns and 18 interceptions. And while he entered the 2019 campaign as one of the nation’s best quarterbacks, his completion percentage (60.8) and yards per attempt (7.4) were career lows, and his 24 touchdowns were six fewer than he threw a year ago. And while a quarterback can regress statistically and still very much be in the first-round conversation (see, for example, Jordan Love), some of Fromm’s physical limitations could more likely see him slip to Day 2, and maybe even Day 3.

As we’ve come to expect from the 2017 and 2018 seasons, in ’19, Fromm’s was almost always efficient from the pocket, regularly making the right reads and delivering short and intermediate passes accurately and on time. But questions about his arm strength and deep-ball accuracy persisted, even when the opponents were incapable of providing much in the way of competition.

Yes, he was the beneficiary of one of the country’s best offensive lines and running games, and that will be hard to replicate at the next level unless he lands with a winning franchise, but it’s not like Fromm hasn’t had his moments. He looked like a young Drew Brees against Notre Dame, but at other times during the season he looked like a quarterback destined to be a backup at the next level.

Also concerning: After setting the world on fire in Georgia’s first five games — all wins over the likes of Vanderbilt, Murray State, Arkansas State, Notre Dame and Tennessee, where he completed more than 70 percent of his throws with eight touchdowns and no interceptions — Fromm limped through the second half of the season. Prior to the Sugar Bowl win over Baylor on New Year’s Day, Fromm’s previous five games saw him complete fewer than 50 percent of his throws five times. He did throw 11 touchdowns and just two interceptions during that span, and the Bulldogs went 4-1, but that’s a troubling sign for a three-year starter not only headed to the NFL but with designs of being a first-rounder.

As it stands, Fromm is currently our No. 6 quarterback behind Joe Burrow, Tua Tagovailoa, Justin Herbert, Jordan Love and Jacob Eason. And depending on how the Senior Bowl (Fromm has yet to be invited) and the combine go, we could see Jalen Hurts surpassing him. Burrow and Tagovailoa are clearcut first-rounders, and likely top-5 selections. Herbert and even Love could also sneak into Round 1, though we think they’re second-round prospects based on their 2019 seasons. Put another way: We understand why Fromm declared for the NFL but we feel like it would have been in his best interest to return to Georgia for his senior season.

That said, Fromm can answer a lot of questions with strong pre-draft performances. There’s no doubt teams will be impressed by his football smarts, but if he can prove that he has the physical skills to compete at the next level that could push him up draft boards.