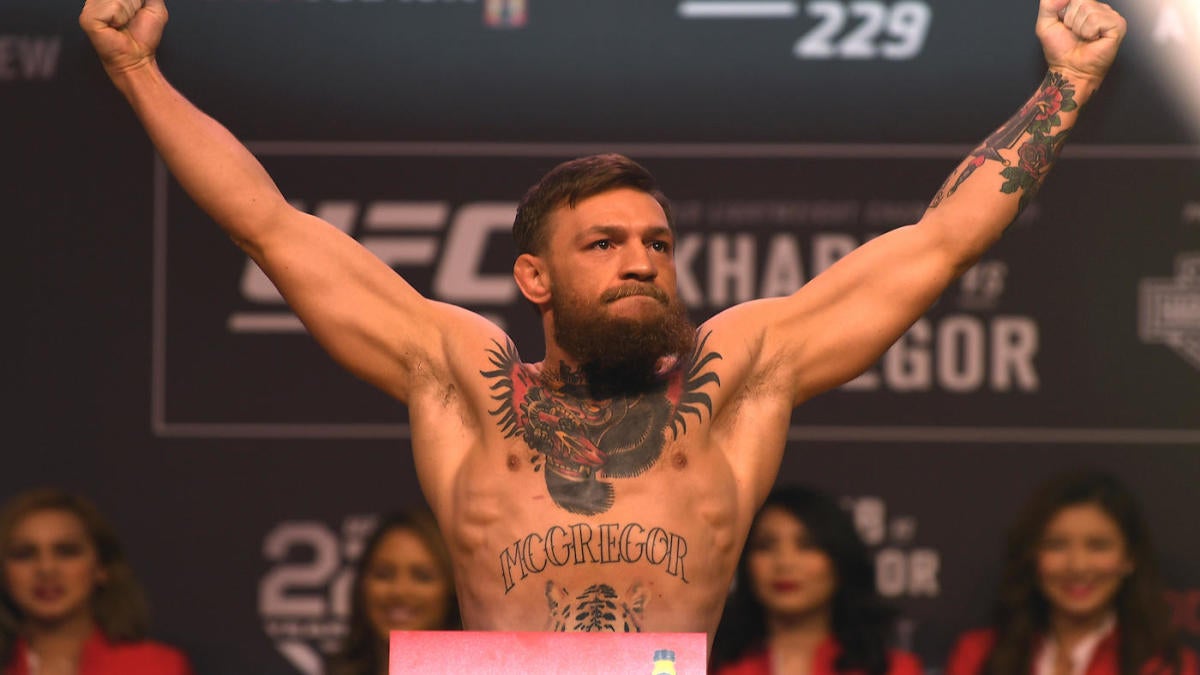 To say that UFC in 2019 was a thrill ride from beginning to end might be an understatement. As the promotion only continues to grow in popularity and flourish on a larger television scale, the action we witnessed in 2019 was certainly a testament as to why any UFC fan should be excited about what’s ahead. And that is exactly what we’re here to accomplish. With 2019 in the rearview mirror now, we don’t want to waste any time and look right ahead to some of the key questions surrounding UFC and some of its biggest stars now that we’ve entered 2020.

So let’s dive right in now to the questions and predictions from the staff.

1. How active will Conor McGregor be?

Brian Campbell, writer: If there’s one thing McGregor seemingly learned from his three years of MMA inactivity — which included a largely one-sided loss to Khabib Nurmagomedov in his only appearance — it’s the value of consistency. The last time McGregor was truly the “Notorious” of old, before crossover celebrity boxing and multiple brushes with the law, it was 2016 when he fought three times for the second straight calendar year. Expect McGregor to be a man of his word in 2020 when he predicts he’ll pull off said trifecta once more in order to stay sharp and cement his return as the biggest draw in the sport’s history.

Brent Brookhouse, writer: McGregor is a tricky case. Fans shouldn’t forget McGregor is the focus of multiple investigations for sexual assault, which could have a big impact on his status for much of the year. If that is not an issue that keeps him out of the cage, I expect he tries to keep an active schedule. That said, the Irishman returns this month to fight Donald Cerrone at welterweight to presumably earn a shot at the lightweight title. But that title is tied up for a fight between champ Khabib Nurmagomedov and Tony Ferguson that doesn’t go down until mid-April. Nurmagomedov isn’t the most active fighter, but based on past scheduling, he’d fight one more time this year, likely late fall or winter. Will McGregor wait for nine or more months after Cerrone to fight again if there’s a title fight waiting? I think he’ll take one more fight in between. Three fights in 2020 seems like a realistic number for McGregor based on his previous talk.

2. Which champion will be the first to fall?

Campbell: There’s documented proof that anything can happen in MMA, so it’s hard to look at the insane depth across multiple key divisions like bantamweight, featherweight and lightweight and imagine that each champion holds serve for the next 12 months. But the most unpredictable division has long been heavyweight, where the UFC title has been passed around like a hot potato more than any other. The trend just might continue this year when champion Stipe Miocic eventually signs on for a trilogy bout against former two-division king Daniel Cormier in a must-see fight which should declare the greatest heavyweight in the promotion’s history. DC let his arrogance get the best of him in their rematch, and has much to prove in what will likely be his career finale.

Brookhouse: If Stipe Miocic vs. Daniel Cormier III were happening sometime before the middle of the year, Miocic would be my answer. Instead, I’ll say Weili Zhang is most at risk of a first-quarter title loss. There’s no doubt she’s capable of beating Joanna Jedrzejczyk when they meet in March, and Jedrzejczyk is far from the unbeatable machine she once was. But Joanna is rugged and experienced in ways that give her a bit of an edge coming into the fight.

3. Who should Jorge Masvidal face next?

Campbell: This is an easy one: it’s either get rich or get the title. If Masvidal isn’t the next in line for current 170-pound champion Kamaru Usman, it should only be because he instead accepted a life-changing purse to face Conor McGregor. Although the Irish star is more focused on securing a lightweight title rematch with Khabib Nurmagomedov, he has openly shared his willingness to face Masvidal as a backup plan, which has been fueled by McGregor’s anger in UFC president Dana White saying that fight is all kinds of wrong for him. The only wild card in this scenario, should injury delay a title shot for Masvidal, is the possible return of Nick Diaz to avenge his brother’s defeat.

Brookhouse: Kamaru Usman vs. Jorge Masvidal is the fight that makes the most sense for both men as well as the UFC. Both are at the peak of their star power, both men are red-hot in the Octagon and there’s no bigger or better fight for either. It’s just simple math. Plus, any opportunity to keep Masvidal from discussing a journey to boxing to face Canelo Alvarez is a good thing. Make the fight, take my money.

4. Who emerges as the next breakout star?

Campbell: On a global scale, given the sheer volume of people in her native China, women’s strawweight queen Zhang Weili is a pretty safe pick, especially if she successfully defends her title against former champion Joanna Jedrzejczyk in March. On the men’s side, it will be fun to see just how far middleweight champion Israel Adesanya can go commercially considering his entertaining style and brash actions on the microphone. “The Last Stylebender” has shown a keen interest in matching himself as difficult as possible, which is the quickest way to stardom if you can back up your bold claims inside the cage.

Brookhouse: I’m going to predict a chain of events that begins with Dominick Reyes losing to Jon Jones and ends with Reyes holding UFC gold. I’m high-end on how competitive Reyes will be when he faces Jones at UFC 247 on Feb. 8. Jones will likely emerge as the winner that night if for no other reason than Jones is an all-time great while Reyes is merely elite in the current division. By the end of the year, I think Jones will move up to heavyweight, leaving 205 to crown a new champion — either undisputed or interim. Reyes will likely earn his way into that fight on the strength of his performance against Jones, and he’ll capitalize on the opportunity to become the first light heavyweight champion since 2011 not named Jones or Cormier.

5. Who will become the next champ-champ?

Campbell: The last four years have seen a rash of newcomers join this exclusive club of fighters to hold two titles simultaneously, from Conor McGregor and Daniel Cormier to Amanda Nunes and Henry Cejudo. The one who has the best chance to be next could very well be Nunes’ fiercest rival in current women’s flyweight champion Valentina Shevchenko. With two close decision losses to Nunes serving as her only defeats, Shevchenko has shown interest in moving back up to 135 pounds to get a third chance. The fact that both her and Nunes have effectively cleaned out their divisions makes this fight much more likely to happen. And considering no other fighter has had the level of success against Nunes that Shevchenko has once “The Lioness” initially toppled the bantamweight division, there’s no telling which direction a third fight would go.

Brookhouse: This answer isn’t a fun one — but no one. This year isn’t going to shape up to allow the crowning of another “champ-champ.” Henry Cejudo gave up the flyweight belt, but going to featherweight for another belt is 10 pounds too far. Alexander Volkanovski is too big to move down to lightweight and too short to move up to middleweight. Nurmagomedov isn’t active enough to fight Ferguson, McGregor and fight again at welterweight. Jones moving up to heavyweight will happen before the end of the year, but I think he’ll test the waters against a Francis Ngannou-type contender before a title shot. Israel Adesanya could, in theory, jump to light heavyweight, but I figure he’s likely to spend 2020 swatting down Yoel Romero and Paulo Costa. And the women’s divisions aren’t currently set up for any champ to move up or down and take a second (or third) title.

Campbell: If 2019 had been any other year historically, Israel Adesanya’s case for Fighter of the Year would have been a slam dunk following three impressive wins, a knockout of former champion Robert Whittaker and a victory in the year’s best fight against Kelvin Gastelum. Adesanya was forced to play second fiddle to Jorge Masvidal’s meteoric rise in the eyes of most voters, however. No harm done in that case. But given Adesanya’s recent move of going out of his way to seek out the most dangerous opponent available after Paulo Costa went down with an injury — Yoel Romero — Adesanya could very well be laying the groundwork for another memorable campaign. While defeating Romero and then following it up with wins over Costa and/or Whittaker (if not both should he seek to be super active again) would be nothing short of an incredible feat, Adesanya has the pedigree and momentum to do it.

Brookhouse: Khabib Nurmagomedov. I like him to beat Tony Ferguson in their long-awaited showdown in April, and if things go according to plan, he’ll rematch Conor McGregor a second time to close out the year — and he’ll dominate that fight just like their first meeting. That should be a strong enough resume to edge past Israel Adesanya, who will beat Yoel Romero and Paulo Costa. It’s a shame Adesanya could finish runner0-up for a second consecutive year, but that’s impressive in its own right.