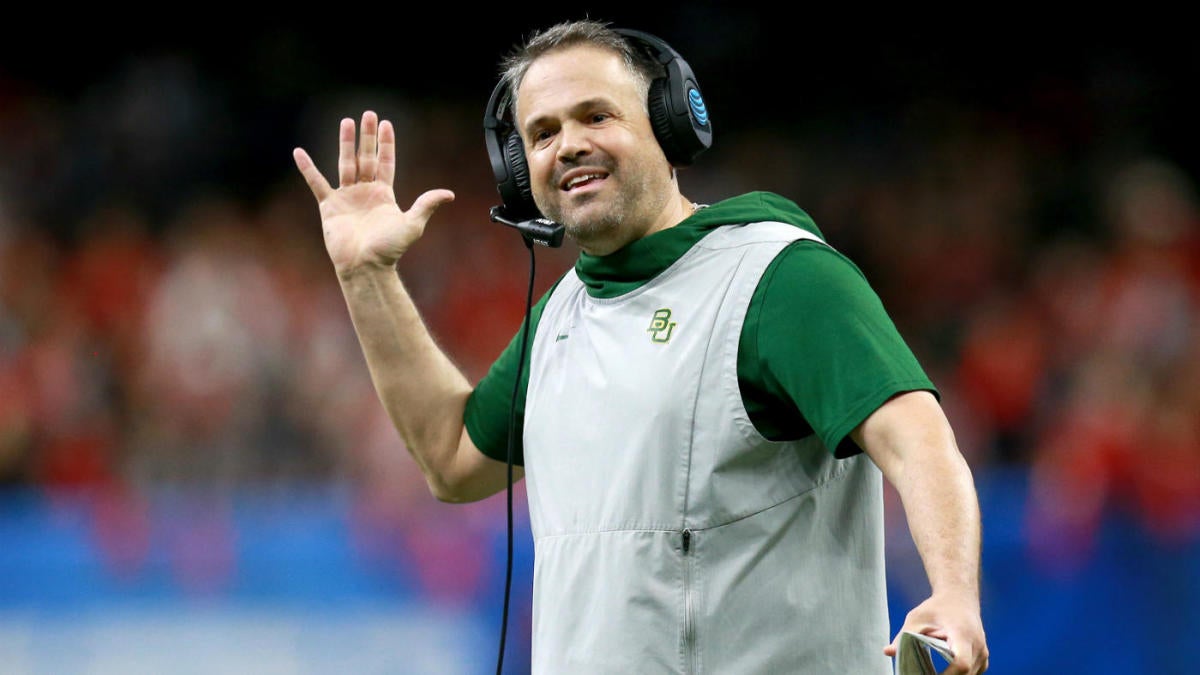 Sure, on paper, it was upgrade: going from Group of Five Temple to Power Five Baylor. Other than that, you wondered what Rhule saw in a program that had been burned to the ground in a sexual assault scandal.

Rhule needed time. Money he already had. Athletic director Mack Rhoades gave him a seven-year deal that eventually earned him top-10 money in 2019. He also needed talent and hope. Never mind the NFL. If the Baylor thing didn’t work out, that might have been it for his major-college career.

But Rhule gambled with his career just as Bill O’Brien did a few years prior at Penn State. Both were flawed, damaged opportunities. O’Brien, then the New England Patriots’ offensive coordinator, took over a program that faced a four-year bowl ban (later reduced) and severe recruiting penalties.

Both rolled the dice and won. Both are NFL coaches as of Tuesday. O’Brien heads into Saturday’s NFL divisional playoff round in his sixth season with the Houston Texans. Rhule accepted the Carolina Panthers job on Tuesday.

On one hand, reviving Penn State and Baylor are not recommended career paths for anyone. On the other, this may be further indictment of NCAA enforcement.

Baylor and Penn State are not the only programs in the past decade that suffered brief NCAA-inflicted dips before being resurrected. USC has won at least 10 four times since a two-year bowl ban in 2010. Ohio State went undefeated under the same circumstances in Urban Meyer’s first year in 2012.

As we debate the long-term viability of the NCAA, these massive rebounds do not help the association’s case. If crime, well, pays … what’s the point?

To be fair, Baylor has cleaned up its house. Gone are the days when a Big 12 administrator once expressed frustration over NCAA’s enforcement’s frequent visits to Waco, Texas. No one associated with the scandal is around. Try as he might to revive it, Art Briles’ coaching career is essentially over.

Penn State underwent a similar housecleaning. The school is more than eight years past that dark day in November 2011 when the Jerry Sandusky presentment was revealed. Since then, O’Brien got the program back on its feet. James Franklin got it back to competing in the Big Ten and winning a conference title.

What were once programs filled with coaching quicksand became springboards.

Where ya at, NCAA? More to the point — short of the death penalty — where’s the deterrent? Not exactly breaking news here, but college football has become too big to fail.

That is essentially the discussion in the name, image and likeness debate. The NCAA is basically asking the federal government to bail it out with new rules because it can’t possibly enforce the existing ones.

Baylor had to overpay for Rhule. It will have to overpay for the next guy, too. The program still faces potential major NCAA sanctions that would be as unfair as any levied in the last decade.

This time, the NCAA investigation centers around whether Briles played and/or practiced players accused of wrongdoing who didn’t go through the school’s formal adjudication that every accused student faces. If those players were allowed to participate, that could possibly be interpreted as an extra benefit. Harsh punishment at this point would be wholly unfair because, once again, the innocent would be punished. The AD, administration, players and coaches have all turned over — sometimes multiple times — since the sexual assault scandal.

It has been 15 months since Baylor received its notice of allegations. Rhule leaves not only a legacy but a bit of a blueprint. During that time, he became the first coach in major-college history to go from 11 losses to 11 wins in a two-year period. Last month, his Bears came within an overtime of getting to the College Football Playoff.

If college football is too big to fail, once again, look no further than Baylor. Facing possible NCAA probation and all the negative recruiting that goes with it, the Bears won at least 10 games for the fifth time since 2010.

“When you realize you have one shot picking the right college, you better go to the place that has the best credentials,” Rhule told his recruits.

Amazingly, in the face of scandal, it worked. Nine defensive starters on the 2019 Sugar Bowl team also started on the 2017 team that went 1-11.

The current openings at Baylor and Mississippi State also highlight the pitfalls of the early signing period. Both jobs came open less than a month after players had signed National Letters of Intent.

While there is no rule that allows players out of their NLI, at this point, it would be the right thing to do. Despite what the NCAA contends — you commit to an institution, not a coach – prospects should get that for which they signed up, at least when they start.

I’m not the only one wondering why we need the NCAA at all. Baylor will overpay because it has to and because it can. Rhule was among the top 10 highest-paid coaches, meaning he was making at least $6 million per year. That kind of scratch will lure talented coaches despite the NCAA storm front.

Would O’Brien and Rhule both be coaching somewhere had it gone sour at Penn State and Baylor, respectively? Of course. O’Brien had been the Patriots offensive coordinator. Rhule had taken Temple from the bottom to the AAC title in four years. The NFL had become enamored with him after exactly one year as an offensive line assistant with the Giants.

The point is neither O’Brien nor Rhule failed. Their talent and their school’s tradition overcame anything the NCAA could dole out.

They accomplished minor coaching miracles in the face of scandal. They won despite the NCAA. More to the point, they won because of their ability. That makes the game itself too big to fail.