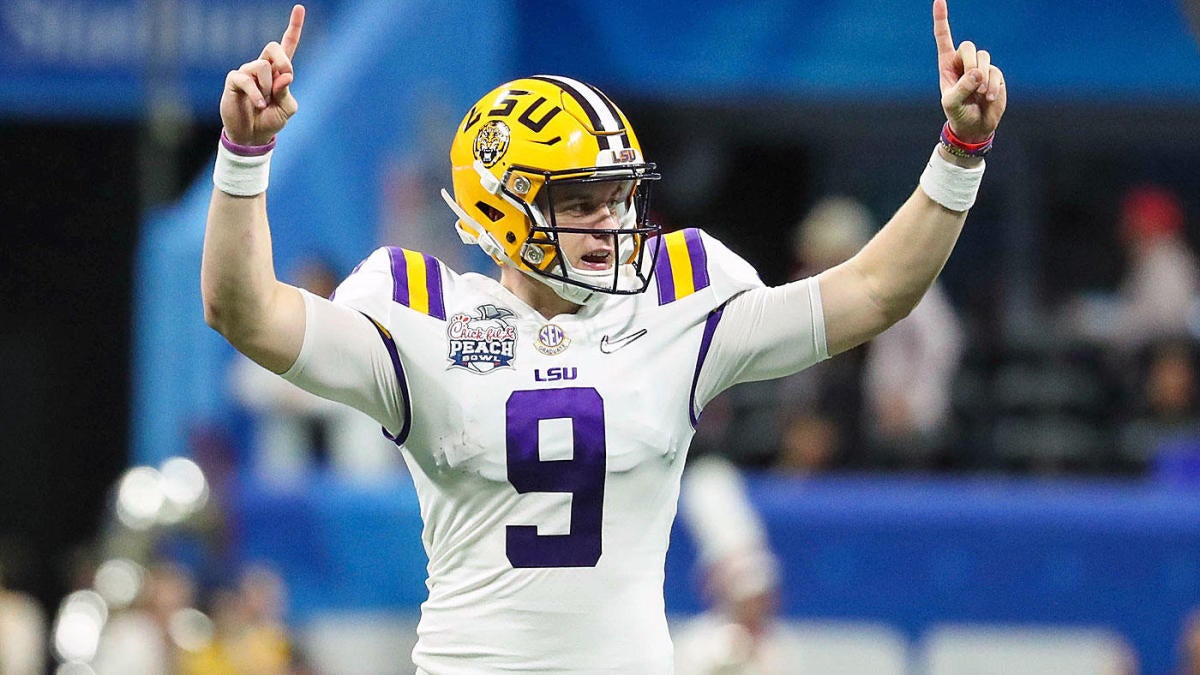 A year ago, Clemson placed three players in the first round of the 2019 NFL Draft. Their opponent in the College Football Playoff championship, LSU, is looking to match or surpass that total in 2020. Fans should become accustomed to hearing the names of several Tigers on Ed Orgeron’s team because they could become household names within the NFL.

CBS Sports has a cheat sheet for the 2020 NFL Draft prospects to know in the College Football Playoff championship.

The Ohio State transfer has elevated his game from a year ago. He is fantastic at sensing pressure in the pocket and moving around to escape it. Burrow is a tough player who displays touch on his downfield throws. He throws with confidence and anticipation. The Ohio native is not going to back down from a fight and he will be the first one jawing with the opponent when the game is going well. The Cincinnati Bengals should find no issues taking him No. 1 overall.

He shows great maturity taking his checkdown when there are no options available downfield. The CBS Sports composite rankings currently have Burrow at No. 2 overall.

Chaisson is a player that with tremendous upside. He has had some difficulty staying healthy but, when on the field, he shows all the characteristics teams want to see from a star pass rusher. The Texas native is savvy and does a good job getting his hands high into the pads of his opponent. He shows great bend around the edge and a spin move to fall back on when his initial rush is stoned. After suffering a torn ACL in 2018, he was given the honor of wearing LSU’s No. 18 jersey, which is symbolic of a leader on their team. Chaisson also looks fairly comfortable in coverage.

NFL teams should be willing to take a chance on him in the first round. The CBS Sports composite rankings currently have him at No. 38 overall.

Delpit is the Jim Thorpe award winner for college football’s best defensive back. He is a fluid mover and he breaks hard when he makes his read. The safety is known to give a lot of cushion in routes and that will need to improve. There are moments where he hesitates on his read. His straight line speed is tremendous. All of the raw talent is there, he just needs to be refined a bit. The junior is a comfortable first round selection. The CBS Sports composite rankings have him at No. 9 overall.

Fulton is barely inside of my first round projections. I have been a little lower on him than others. He looks disinterested in tackling and panics in coverage downfield too often. All of the appealing traits are there though: quick footwork, size and speed. The cornerback just needs to put it all together. LSU defensive backs have had a lot of success in the NFL. It would not surprise me if Fulton joined the list. He is ranked No. 15 in the CBS Sports composite rankings.

The Louisiana native has risen into the first round conversation with strong play this season. Jefferson shows quick feet and creates separation for himself. When the ball is in the air, he displays great body control and good hands. Last season, Jefferson was showing his hands too early on routes, which would allow the defender to make a play on the ball. He has improved leaps and bounds in that category this season. Jefferson has some wiggle after the catch and also does a great job of blocking for his teammates. The junior is a tough player who loves the game.

He is the No. 48 player overall in the CBS Sports composite rankings. It is a strong year for wide receiver prospects so that could ultimately hurt his eventual draft stock.

There is a laundry list of other prospects expected to be taken during the 2020 NFL Draft including: offensive tackle Saahdiq Charles, offensive guard Lloyd Cushenberry III, defensive tackle Rashard Lawrence, linebacker Michael Divinity and running back Clyde Edwards-Helaire. Generally speaking, every player on the field during this National Championship game has a potential NFL future.

With all of the discussion about this year’s group, do not sleep on the talent coming down the pipeline. Wide receiver J’Marr Chase looks like he may be better than Jefferson. True freshman cornerback Derek Stingley is already better than Fulton. Wide receiver Terrace Marshall Jr. is another special young player. The Tigers are going to be loaded for a while.