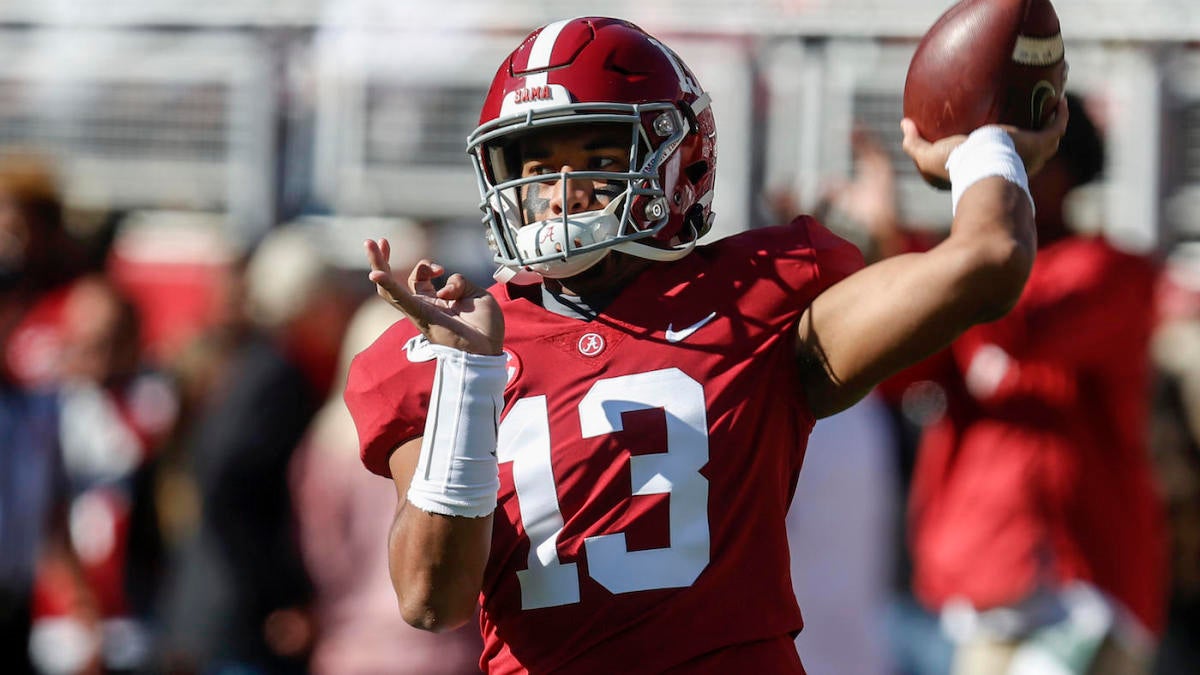 Tua Tagovailoa announced on Monday that he’s leaving the University of Alabama and will declare for the 2020 NFL Draft. This is great news for quarterback-needy teams — starting with the Miami Dolphins, who have the No. 5 pick — but questions remain about when Tagovailoa will be cleared to play.

Tagovailoa suffered a fractured hip against Mississippi State on Nov. 12, had surgery a few days later, and is still months away from returning to the field. How many months? That’s the question every NFL team will be looking to answer, and even Tagovailoa admitted Monday that he had no clear timeframe.

“I’m optimistic that I’ll be able to play this upcoming season, but I think for me, right now, I’m more worried about getting better as soon as possible, seeing what I can do [in the pre-draft process],” Tagovailoa told reporters. “It’s all dependent on what the doctors have to say to the teams and what the results come back in as.”

But even if Tagovailoa isn’t ready to suit up in 2020 — and that seems more than reasonable given the severity of his injury — there’s plenty of value in drafting him and then having him redshirt his rookie season while he continues his recovery. There’s also plenty of value in taking him with one of the top-10 selections because the upside is off the charts; remember, coming into the season, Tagovailoa was the clearcut No. 1 quarterback, and our No. 3 overall prospect behind only Jerry Jeudy and Chase Young. Two things changed: The Joe Burrow Rocket Ship blasted off and Tagovailoa was injured.

So knowing what we know, and with one big unknown still to be determined, which NFL teams would be interested in Tagovailoa?

This is the best-case scenario for the Dolphins, who appeared to be #TankingforTua early in the season when they were jettisoning franchise players for draft picks, and limped to an 0-7 record. The tank talk quickly subsided as the team finished with five wins in its final nine games. But the recent success also meant Miami had fallen out the running for Burrow with the No. 1 pick and found themselves with selections at No. 5, No. 18 (as part of the Minkah Fitzpatrick trade) and No. 27 (as part of the Laremy Tunsil trade). In the seven weekly mock drafts we published after Tagovailoa’s injury we had the Dolphins taking some combination of offensive linemen, pass rushers and cornerbacks on five occasions. On two others, we had them reaching for Oregon quarterback Justin Herbert, who has first-round talent but played with the consistency of a second-rounder in 2019.

Now the Dolphins can take Tagovailoa No. 5 overall, and even if he’s not ready to suit up in 2020, have him continue his recovery while Ryan Fitzpatrick and Josh Rosen hold down the starter and backup roles (both are under contract in ’20).

Philip Rivers is headed for free agency and the Chargers are in the market for their next face of the franchise. They also have the No. 6 pick, just behind the Dolphins. If they feel Tagovailoa is worth the risk there’s every reason to believe they would try to trade up in front of Miami to get him. This is great news for the Lions and Giants, who have the third and fourth-overall selections and are set at quarterback. (We can’t imagine the Redskins would trade out of the No. 2 pick if it meant not landing Chase Young.) That said, no team has more draft capital than the Dolphins, who, in addition to the three first-rounders, own two second-rounders (39th and 56th) and a third-rounder (70th), and could spend their way to the top of the draft to make sure they get Tagovailoa, if that’s ultimately what they decide.

This also assumes the Chargers don’t fall in love with Herbert, Jordan Love or Jacob Eason; Herbert will probably go in Round 1 based on physical traits and upside but Love and Eason should be on the board in Round 2 and the Chargers have the No. 37 pick.

What happens if the medicals on Tagovailoa leave lingering doubts about his long-term recovery? There’s certainly a chance he slips down draft boards as a result, and that was a reality he seemed to understand during his press conference. But it also opens the doors for other QB-needy teams to take a flyer in the face of that risk. The Jags overpaid for Nick Foles last offseason and while Gardner Minshew was a fun story early in the 2019 season, he’s best suited as a backup. Jacksonville also has the No. 9 and No. 20 picks; if Tagovailoa got past the Dolphins and Chargers, the Jags could target him. And with the team on the hook for Foles for at least one more season, there would be no rush to get Tagovailoa on the field. The Jags would also be candidates to trade up but given that coach Doug Marrone has one year to fix a lot of problems, the team might be better suited staying put and plugging as many holes as possible.

Las Vegas Raiders: Jon Gruden loves big-armed quarterbacks. Tagovailoa is a lot of things, but “big-arm quarterback” is not one of them. It’s also hard to imagine, at least from the vantage point of early January, that Tagovailoa would be on the board when the Raiders select at No. 12. They also have the No. 19 pick but Gruden could nab a deep-threat wide receiver like Jerry Jeudy and circle back for Herbert or Love later in Round 1, or even target a pass rusher.

Indianapolis Colts: The Colts have Jacoby Brissett under contract for one more season, and while general manager Chris Ballard said last week that, “Right now, yes, Jacoby is our starter,” he also had this qualification: “The jury’s still out. That’s why we did the short-term deal with Jacoby, to have the security of a player we liked and to find out if he can be the guy.”

So even if Brissett is “the guy,” having a Plan B would make sense. But the Colts aren’t on the clock until the 13th selection and if Tagovailoa is still available there would be a glaring reason.

Tampa Bay Buccaneers: Jameis Winston set a career high with 33 touchdown passes this season. He also also blew the doors off his previous interception total, tossing 30 (including a pick-six on his final pass of 2019), 12 more than his previous mark. That said, it sure seems like coach Bruce Arians wants to move forward with Winston in 2020, even though the quarterback isn’t yet under contract. Tagovailoa feels like a long shot, in part because of the Arians-Winston dynamic, but also because the Bucs have the 14th pick.

New England Patriots: Tom Brady isn’t under contract. He’s also 42 years old and coming off one of the worst statistical seasons of his career. Nick Saban and Bill Belichick are also longtime friends, and the Pats have a history of drafting Alabama players. It would take a lot for New England to find its way into the top 10, but if Tagovailoa slides to the middle of Round 1, this feels like a distinct possibility. Of course, this all changes if Brady is re-signed — or becomes a bigger pre-draft talking point if Brady ends up elsewhere.

New Orleans Saints: Like the Patriots, the Saints have a 40-year-old quarterback in Drew Brees who has one more year left on a deal the team could choose to void before then. But New Orleans also has to make a decision on backup Teddy Bridgewater, who went 4-0 in Brees’ absence earlier in the season, and there’s also Taysom Hill, who was the best Saints quarterback on the field in Sunday’s loss to the Vikings. Put another way: If the Saints were to move on from Brees, Hill might be the front runner for the job ahead of a rookie.