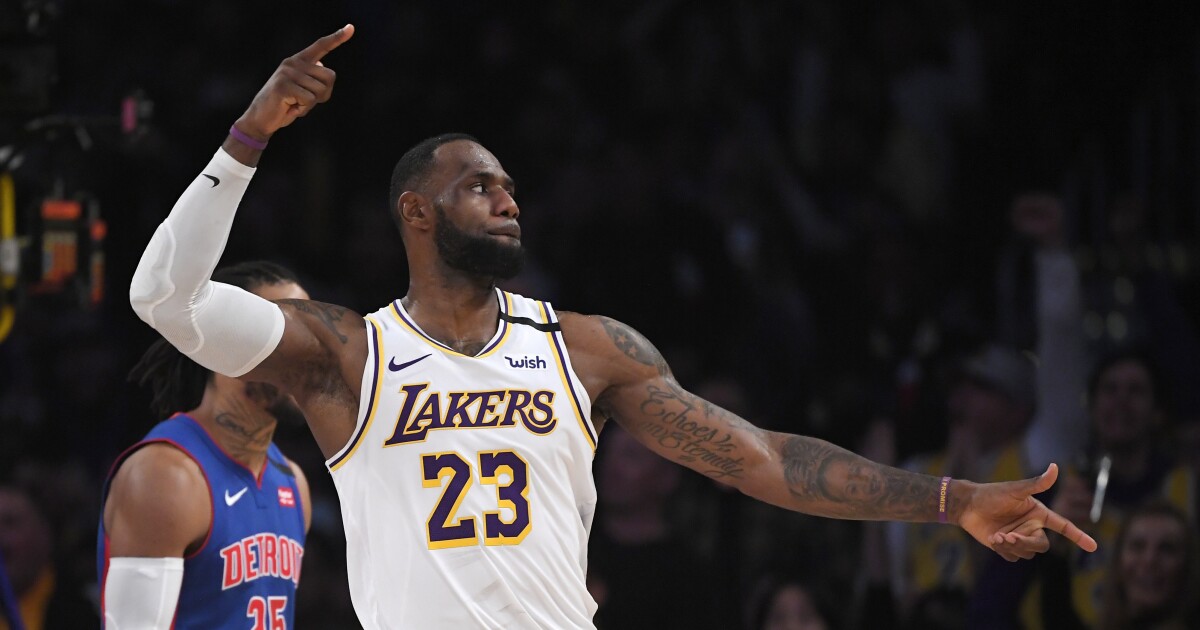 As his 35th birthday approached, LeBron James made the same kinds of jokes about aging that anyone does when reaching a new life milestone. For a professional athlete it can be more pointed, as most NBA players finish their careers long before their mid-30s.

But James’ performance in his first week as a 35-year-old wrote a different narrative. He had a spring in his step that seemed to be fading during December. As it turned out, James didn’t need youth serum, he just needed a few nights at home.

Consequently, James earned his second player of the week nod of the season for the week of Dec. 30 (his birthday) through January 5. During that span, James averaged a triple-double with 23 points, 11.7 rebounds, 12.7 assists and 1.3 steals. The Lakers won all three games they played against the Phoenix Suns, New Orleans Pelicans and Detroit Pistons.

“However the game presents itself, whatever this team needs to do, whether they need me to be in the teens in scoring, or teens in assists, I can do that,” James said. “They need me to be high in the 20s or in the 30s in scoring, I can do that as well. Just trying to keep the defense, just trying to keep them guessing so they don’t quite know what I’m gonna do coming off pick-and-rolls or transition. The one thing I do know I’m gonna see is a lot of eyes.”

Other player-of-the-week nominees included Phoenix’s Devin Booker, Oklahoma City’s Chris Paul, Houston’s James Harden and Lakers star Anthony Davis, who also has won the award twice this season. His first award marked the first time since 2013 that a Laker was given the honor. Then it was Kobe Bryant, who also holds the record for most Western Conference player-of-the-week awards by a Laker in one season. He earned it five times each during the 2005-06 and 2002-03 seasons.

James has earned a weekly award 63 times, but 61 of them were in the Eastern Conference where he spent his career before arriving in Los Angeles before last season.

Guard Avery Bradley is questionable for Tuesday’s game against the New York Knicks, which means they are saying there is a 50% chance he plays.

The Lakers had a film session and did some shooting Monday but did not practice.

Bradley has missed 14 games this season, 13 with a hairline fracture on a nonweight-bearing bone in his right leg. After the stretch of missed games, the Lakers eased him back into the lineup over five games. In his sixth game back, he returned to starting.

He earned a spot among the starters by virtue of his tough defense, and the Lakers’ defense suffered during Bradley’s absence.

In 2008, Dwight Howard was a fourth-year star for the Orlando Magic taking part in the NBA’s dunk contest. He donned a Superman shirt and red cape and took off from just inside the free-throw line for a dunk that caused Magic Johnson, a judge, to pump his fists.

In the final round, Howard placed a basketball on a tiny hoop affixed to the backboard. He leaped, took the ball off the tiny hoop and performed a windmill dunk.

Could there be a reprise?

Despite a report that Howard will participate in the dunk contest, a source close to him says the big man has not made a decision but is contemplating it.

Either way, it’s not the only All-Star category in which Howard has garnered attention. While James and Davis were first and second among front-court players receiving fan votes for the All-Star game, Howard was 10th in the first returns with 69,785 votes.