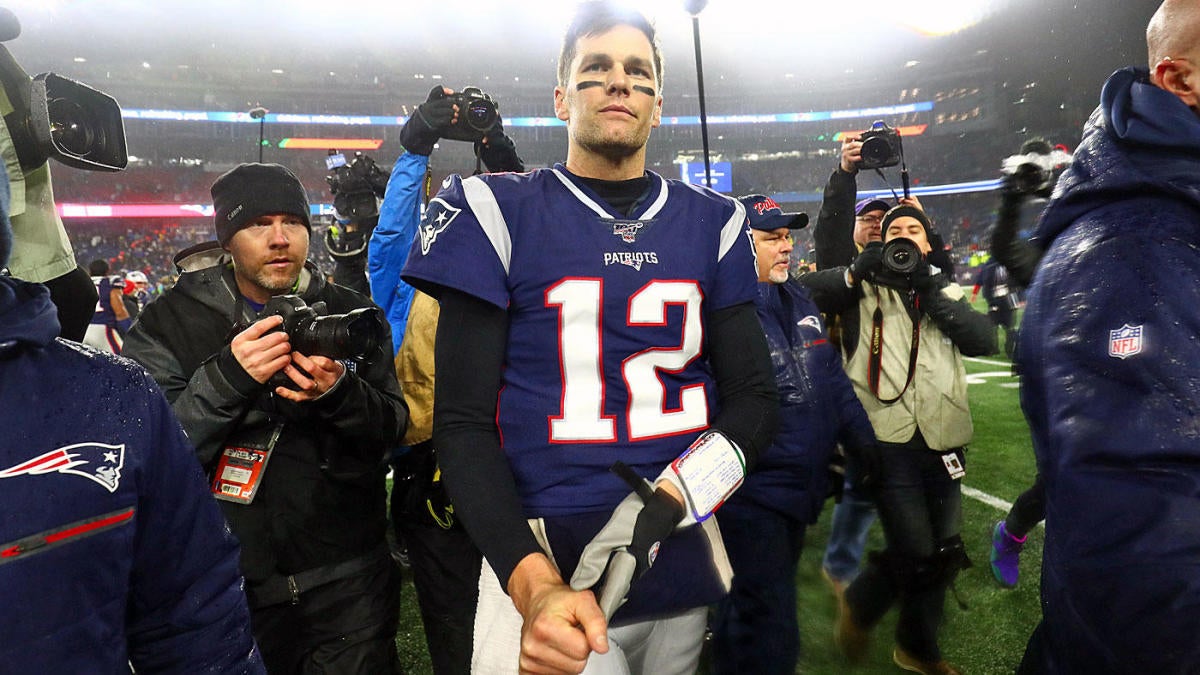 You never know when the end is until it actually happens.

As the Patriots are currently sitting in the unfamiliar spot of not preparing for the AFC Divisional Round after they were booted from the playoffs by the Titans last Saturday, they are now potentially facing the task of replacing the greatest player to ever put on their uniform. You’d have to be living under a rock over the past few months not to know that quarterback Tom Brady, the headliner for all six of New England’s Super Bowl titles, is set to hit unrestricted free agency for the first time in his two-decade NFL career.

Now that Brady has the power to possibly leave Foxborough in the next few months, it seems like he’s intent of flexing that power and at least seeing if there are greener pastures somewhere in the league. In the event that he finds one and bolts, Bill Belichick and company will be tasked with finding the next guy. Of course, they could hand the reins over the Jarrett Stidham, who’ll be entering his second season in the NFL after the Pats took him in the fourth round of the 2019 NFL Draft out of Auburn. However, if they don’t see him being the next leading man, they’ll have to look elsewhere.

Below, you’ll find over a dozen potential targets for New England in this potential post-Brady world. These quarterbacks are categorized as either free agent signees, trade targets or someone who they’ll have to spend draft capital on.

In a perfect world for Robert Kraft, Brady inks a deal to make him a Patriot for the rest of his days in the NFL. But if he doesn’t, these are some of the guys he’ll have to look at for his next starter in 2020.

Teddy Bridgewater: Bridgewater was tremendous in filling in for Drew Brees when he missed time in 2019, leading the Saints to a 5-0 record as a starter. Over the course of the season, he was very accurate and completed nearly 68% of his throws for 1,384 yards and nine touchdowns. That accuracy should make him appealing for the Patriots as they pride themselves on precision passing and working their offense from the inside (slot, receiving backs, tight ends, etc.) out. The 27 year old’s injury history will certainly be something to watch as well as New Orleans’ own quarterback situation. If Brees decides to hang up his cleats and retire, they’d likely be Bridgewater’s first choice simply due to familiarity. If he stays, that could open the door for New England.

Andy Dalton: With LSU quarterback Joe Burrow being the consensus lock for the No. 1 overall pick at the 2020 NFL Draft, Dalton’s future in Cincinnati is nonexistent. He’s hardly the most exciting pick of this free agent bunch, but he has been a starter in the league for a long time and played a somewhat of a high level (being named to the Pro Bowl three times). His poor playoff record (0-4 with one touchdown and six interceptions) and lack of accuracy would be big question marks for the Patriots possibly bringing him aboard.

Philip Rivers: Out with the old and in with the … old? Los Angeles doesn’t seem particularly open to bringing back Rivers in 2020, which could make him a target for New England. Rivers’ numbers haven’t taken as much of a dip as you’d think, but the veteran QB wasn’t great in 2019. He threw 20 picks, fumbled eight times and led L.A. to just a 5-11 record. If the Patriots think that all Rivers needs is a change of scenery along with an upgrade in coaching, he could be an option that could keep them competitive beyond Brady for the next handful of years.

Marcus Mariota: Marcus Mariota’s time in Tennessee ended when he was benched for Ryan Tannehill earlier this season. The former No. 2 overall pick in 2015 was poor in his six starts this season. He completed a career low 59.4% of his passes for just 1,203 yards, seven touchdowns and two picks. One positive aspect of Mariota is that he doesn’t turn that ball over too much, which should be looked at kindly by any club including the Patriots. At 26, he’s still young enough to possibly try and tap into what is loads of talent. If Belichick thinks he can bring that out of him, he’d likely come cheap on a prove-it deal. High upside, minimal longterm risk.

Ryan Tannehill: As for the other Tennessee quarterback, the Titans have absolutely taken off with Tannehill as the starter and are now in the AFC Divisional Round after beating the Pats in Foxborough. After being named the starter, he was one of the better signal callers from a statistical standpoint in the league, completing over 70% of his throws in 12 appearances with 2,742 yards, 22 touchdowns and six picks. Why would Tennessee let him go? Well, if Mike Vrabel makes a call to his friend Tom Brady to come play under him in Nashville, that could free up Tannehill for teams like New England. Would certainly add a bit more drama to this budding rivalry after this latest playoff matchup.

Jacoby Brissett: The connection is pretty clear here. New England drafted Brissett in the third round of the 2016 NFL Draft out of NC State and spent a season with Pats before they dealt him to Indianapolis after training camp in 2017 for receiver Phillip Dorsett. Since then, Brissett has seen a ton of experience as a starter thanks to Andrew Luck’s injuries and ultimate retirement from the NFL. He hasn’t exactly wowed in his starts and the Colts seem to be pretty open to the idea of possibly bringing in another quarterback to upgrade the position. If the Patriots wanted to bring back a familiar face, he likely wouldn’t cost all too much to pry out of Indy, especially if they find a more accomplished QB for 2020.

Alex Smith: His health obviously needs to be checked out and cleared before making a move to acquire him, but Alex Smith would be an intriguing option. He’d certainly come cheap given his history and Washington seems to be moving forward with Dwayne Haskins as their franchise QB. When healthy, Smith is a veteran quarterback, who is accurate and is not too far removed from a 2017 campaign where he threw for over four thousand yards, 26 touchdowns and just five picks. He’s not the type of quarterback to go into a building and steal a game for you, but he won’t lose it for you either. With Bill Belichick still leading the show, Smith’s game-manager skill set would fit well. Again, health is still the major concern here.

Cam Newton: Certainly the sexiest name on this list of trade targets. Newton is a former league MVP that led the Carolina Panthers to Super Bowl 50. When healthy, Newton is dangerous with his legs and his arm, which does cater to a more modern NFL offense. The Panthers seem to be moving in a new direction after firing head coach Ron Rivera in the midst of last season and a Newton trade may be the next phase of their restructure. As long as he’s healthy, the Patriots would be wise to at least make a call and see what it’d take to acquire him.

Gardner Minshew: Minshew Mania in Foxborough? The Jaguars find themselves in a rather interesting and tough spot this offseason. As they watch Nick Foles essentially go through a lost season in 2019, Minshew emerged and played well for them. He was accurate, showed he could be clutch at times and didn’t turn the ball over much. Sure, there were some bumps along the way (the London loss to Houston), but there’s potential there. Unfortunately for Jacksonville, they are kind of stuck with Foles, who has an untradable contract. Minshew is the more tradable asset and arguably could fetch them a decent haul. This would be a savvy move for Belichick to benefit from the Jaguars’ disfunction.

Josh Rosen: Josh Rosen has gone through a really rough start to his NFL career. He showed some flashes during his rookie season with Arizona, but the Cards elected to trade him away after Kyler Murray was looking at them with the No. 1 overall pick in 2019. Then in Miami, Rosen’s struggles saw veteran Ryan Fitzpatrick take his job for the bulk of the season. With the Dolphins seemingly not putting Rosen in their longterm plans, Belichick could call up his old friend in Brian Flores to see what it would take pry him out of South Beach. The asking price likely wouldn’t be too substantial and the Pats could roll the dice on a quarterback who was taken No. 10 overall just a couple years ago.

Tua Tagovailoa: The Alabama quarterback has declared for the NFL Draft and is arguably one of the more polarizing prospects in this class. Because of his hip injury, there’s some question as to where Tagovailoa, once considered to be a lock for the No. 1 overall selection, will fall. Most experts still think that he’ll be a top-10 picks, so the Patriots, who are sitting at No. 23 overall, would have to trade up to get him. Could Belichick get Matt Patricia and the Lions on the phone to see if he could offer a package to get to No. 3 overall? Why not? Of course, the Nick Saban connection with Belichick and the Patriots is a strong foundation for Tagovailoa as well. If he stays healthy, Tagovailoa is an all-world talent and certainly a candidate to be a franchise quarterback.

Justin Herbert: Herbert feels like a prospect that would be better served to sit a year or two behind an established veteran as oppose to being thrown out as a Week 1 starter in his rookie season. That said, he’s someone that New England could grab at No. 23. He’s raw, but does have a ton of talent that Bill Belichick and the Patriots could try and tap into.

Jacob Eason: CBS Sports NFL Draft expert Ryan Wilson has a great breakdown of Jacob Eason up on the site now. He’s in the conversation as the No. 2 quarterback prospect in this class and has all the makings of a franchise cornerstone. He has a big arm, is accurate in tight windows and will likely draw comparisons to Carson Palmer and Matthew Stafford. If he lives up to that hype, that’d certainly be a nice type of quarterback to fall back on after Brady.