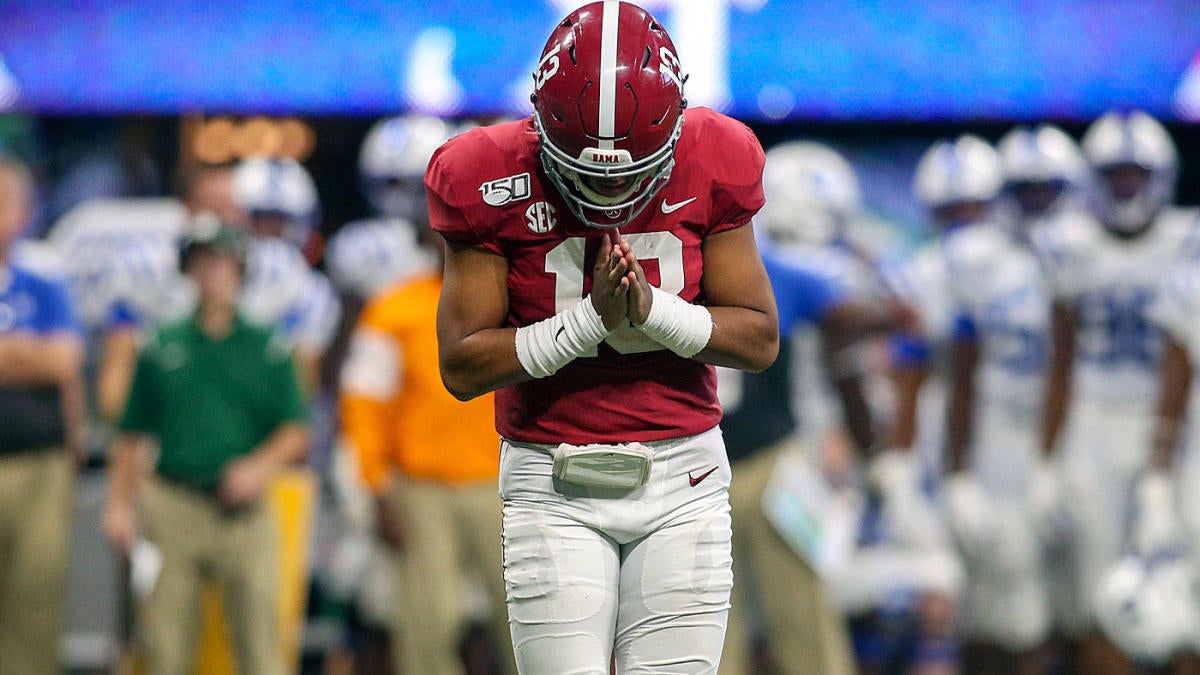 It would have made no sense for Tua Tagovailoa to return for a final college season with a surgically-repaired hip.

It would have made total sense if Tagovailoa had been the only draft-eligible Heisman Trophy runner-up/All-American/national championship quarterback/potential No. 1 overall pick to stay in college on crutches.

Both those statements can be true after the monumental Monday that altered the fortunes of Tagovailoa, his family, Alabama, the NFL, the SEC, and yes, all of college football.

Tagovailoa formally declared for the NFL Draft, forgoing his senior season at Alabama. Except the decision clearly wasn’t that easy after watching Alabama’s forever quarterback at the podium.

“These kind of things don’t take the doctors, don’t really take myself [in account],” Tagovailoa said. “It really boils down to one thing: faith. Coming from a family that has a lot of it, I’m willing to take that challenge.”

That’s what it is: faith that he can play football at a high level again. The future may be lucrative with first-round money, but it certainly isn’t clear. In fact, nothing from this point is assured.

Tagovailoa enters the professional realm having recovered from two surgically repaired ankles. The dislocated hip has complicated things further. Tagovailoa’s conviction is one thing, finding an NFL team that has enough faith to draft him with a high selection is another.

Perhaps the greatest player in Alabama history may be a tremendous risk, “damaged goods” at the next level. The NFL potential after his all-time greatness at Bama remains a tease for the pros.

CBS Sports NFL Draft expert Ryan Wilson has projected Tagovailoa going No. 5 overall in the first round to the Dolphins in his latest mock draft. That includes the possibility of the quarterback “redshirting” in 2020 as part of his rehab, Wilson said.

Tagovailoa mentioned more than once that the 3-4 month mark since the injury will be his next indicator. That’s when doctors will tell him how far he has progressed. The quarterback already said last month that he would lose what he called “some inward rotation.”

“I don’t think I’d say I’d be the same again,” Tagovailoa said ominously at that time.

“I don’t think any of the doctors can tell the foreseeable future,” he said Monday. “None of the guys rehabbing me can tell that.”

That’s what made Monday’s decision the best-case scenario for Tagovailoa. If he’s going to play football, he might as well get paid for it.

“It’s a unique situation, for sure,” he said. “With my hip, a lot of the [general managers], the owners … they kind of look at this like a knee injury. ‘Are we going to take a chance on this guy? Is this guy going to be able to do a pro day before the draft?'”

That would be in March, two months from now, about the time spring practice heats up in Tuscaloosa, Alabama. A new quarterback battle will the hot topic. Rising redshirt junior Mac Jones will battle Tua’s brother Taulia (a rising sophomore), redshirt freshman Paul Tyson and incoming five-star freshman Bryce Young.

There will be a giant hole on the practice field and in the locker room where No. 13 used to reside.

What we’re left with is the absence of a transcendent college football figure. That magic left arm, that mobility, that charming smile.

Tagovailoa had a national championship ring before he started a game. He was a Heisman Trophy runner up as a sophomore. Perhaps even more amazing, he finished 10th this season despite the devastating injury. He leaves the game as the FBS leader in career pass efficiency.

Bama’s quarterback was a different cat. He told me once that USC was his top choice out of high school. But when Steve Sarkisian lost his job, the family came to the decision that Alabama was the choice.

Alabama, as good as it is in football, is more than 4,300 miles from Oahu, Hawaii.

“Culturally, it was different,” Tagovailoa said. “… They just fry everything over here.”

But T-Town and the Deep South adopted him as one of their own. In a massive bit of serendipity, Sarkisian was his final offensive coordinator. That’s why there was widespread speculation up until the announcement that Tagovailoa would stay.

The kid said it himself after the injury: He had considered rolling the dice and playing a final college season, in part to get back to that No. 1 overall spot.

That he had even considered that possibility was amazing. But he is that loyal, that competitive. His family is as close-knit and devoted a group as exists.

When I visited their home in 2018, it wasn’t a show. Taulia was at the dinner table dutifully doing homework. His parents sat next to each other on the couch happily describing their transplant from Hawaii.

“I’m told we stick out,” Diane Tagovailoa, Tua’s mother, said at the time. “We get a lot of stares. … Now and then we’ll get stopped.”

Think about their everlasting celebrity status now. Their son leaves as one of the best college football players in history. In this decade alone, he is on pedestal with Cam Newton and Johnny Manziel, transformative figures who became national stories outside of football.

It has now been 51 days since Tua Tagovailoa was tackled by two Mississippi State defenders injuring that hip with 3 minutes left in the first half of a blowout. Saban said afterward that would have been his quarterback’s last series.

With him, Alabama might have been a preseason No. 1 in 2020. Again. Without him, Alabama’s dynasty may be in question.

But that’s not the first thing that comes to mind after Monday. Something valuable has been lost if you’re a college football fan. Something we may never see again.

“I don’t know how to feel right now,” Tagovailoa said. “I’m content with the decision I’ve made. It’s more so, what’s next?”