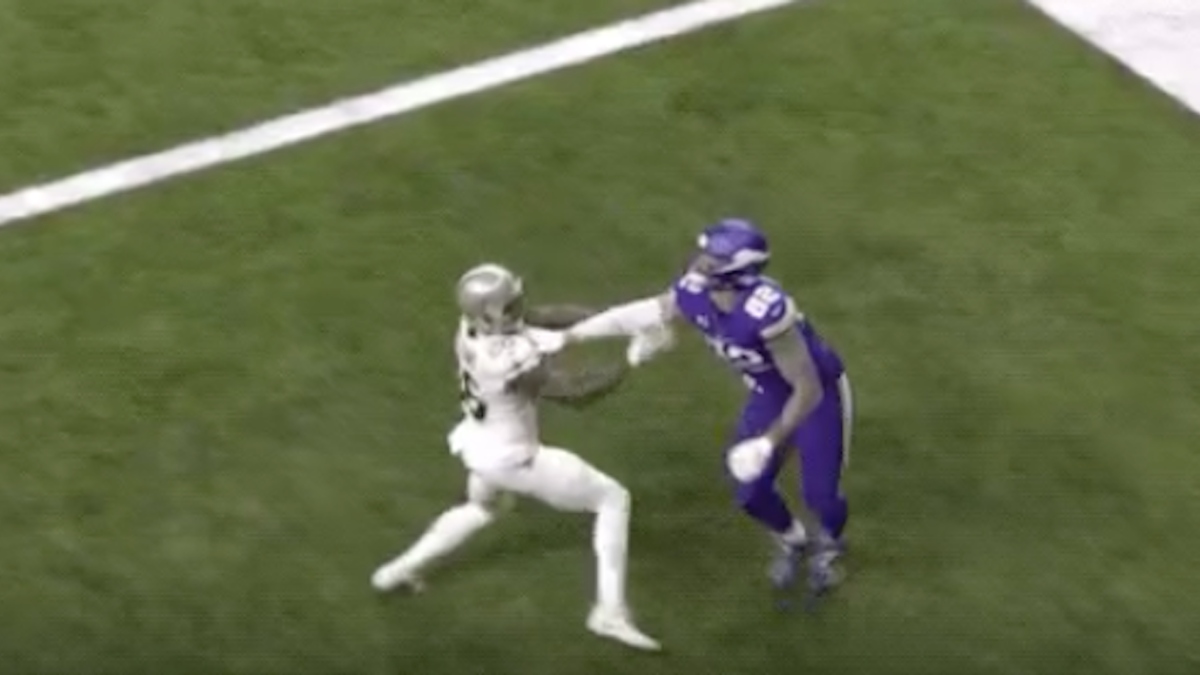 take on the play by clicking hereAfter the way the Saints‘ season ended last January, Sean Payton probably thought there was no way his team could possibly lose on a controversial pass interference no-call for the second year in a row, but that’s exactly what happened Sunday in New Orleans’ wild 26-20 overtime loss to the Vikings.

The extra period started with Minnesota getting the ball first, and through the first few plays, the Saints just couldn’t stop the Vikings offense. Thanks to Kirk Cousins, who threw for 63 yards in overtime, the Vikings were able to move the ball from their own 25-yard line to the Saints’ 2, and that’s when the craziness started.

After Dalvin Cook got stuffed on two straight plays, the Vikings were facing a third-and-goal from the 4, and that’s when this happened:

That’s a 4-yard touchdown pass from Cousins to Kyle Rudolph that ended up winning the game for Minnesota, but you could certainly argue that it shouldn’t have.

On the play, Rudolph clearly extends his arm to keep Saints cornerback P.J. Williams at bay, which you can see below.

If an offensive player fully extends his arm like that, it’s supposed to be grounds for offensive pass interference. Although the play was reviewed, the NFL‘s vice president of officiating, Al Riveron, decided to let the call on the field stand.

“We looked at all angles that Fox afforded us, and Fox gave us some great views,” Riveron said in the pool report. “There is contact by both players, but none of that contact rises to the level of a foul. This is consistent with what we’ve done all year long, we left the ruling on the field. We let it stand.”

You can read more about Riveron’s take on the controversial play by clicking here.

Unfortunately for Riveron, not everyone agreed with his take on the play. Former NFL referee Terry McAulay, who served as the lead official in three different Super Bowls, tweeted after the game that it was an obvious interference play on Rudolph.

The no-call was huge, because a touchdown was the only way the Vikings could end the game at that point. If Minnesota had settled for a field goal, then the Saints would have gotten the ball back trailing 23-20. Instead, the interference went uncalled, and the Vikings won the game on the controversial touchdown.

The irony is that the only reason interference is even reviewable is because of last year’s NFC Championship Game when the Saints lost to the Rams after the officiating crew missed a blatant pass interference, where Los Angeles defender Nickell Robey-Coleman hit TommyLee Lewis before the ball arrived.

The controversy led to a rule change during the offseason that eventually allowed coaches to challenge pass interference calls (and no-calls) during the 2019 season. Over the course of the year, the rule turned into a weekly controversy for the NFL and that controversy probably isn’t going to go away anytime soon due to the fact that the Saints were on the ugly end of a no-call for the second year in a row.