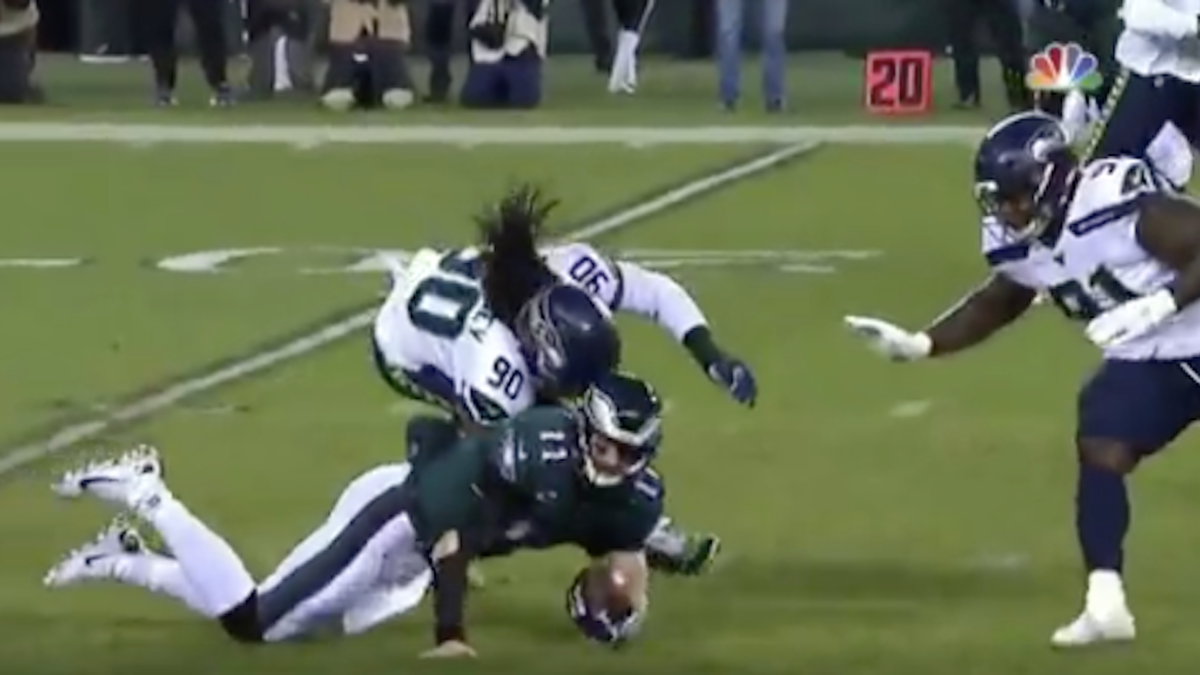 If the Philadelphia Eagles are going to beat the Seattle Seahawks, they’re going to have to do it without Carson Wentz. In the first postseason start of his career, Wentz got knocked out of the game in the first half after taking a helmet-to-helmet shot from a Seahawks defender.

The Eagles announced shortly after halftime that Wentz wouldn’t be able to return to the game due to a head injury.

The play where Wentz got hurt happened with just under seven minutes left to go in the first quarter. On a first-and-10 play from the Eagles 25-yard line, Wentz dropped back to pass and as he was looking for a receiver, he got tripped up by Seahawks safety Bradley McDougald.

As Wentz was falling to the ground, Jadeveon Clowney came in and hit the Eagles quarterback with the crown of his helmet.

Although helmet-to-helmet hits are supposed to draw a flag, Clowney wasn’t penalized on the play.

After the hit, Wentz was able to finish the drive, which lasted for five more plays, but after the Eagles eventually punted, the quarterback was taken into the blue medical tent. After doing some initial observations in the tent, the Eagles medical team decided to take Wentz to the locker room to evaluate him for a head injury. According to ESPN.com, there was enough concern about the injury that Wentz’s wife was escorted down to the Eagles locker room area.

With Wentz out, the Eagles are turning the offense over to backup quarterback Josh McCown. Although McCown has a long history in the league — the 2019 season marked his 17th year in the NFL — the veteran quarterback had never taken a postseason snap before entering the game near the end of the first quarter.

As for Wentz, he was 1 of 4 for three yards before leaving the game. To keep tabs on the Seahawks-Eagles wild-card game, be sure to click here so you can follow along in our live blog.