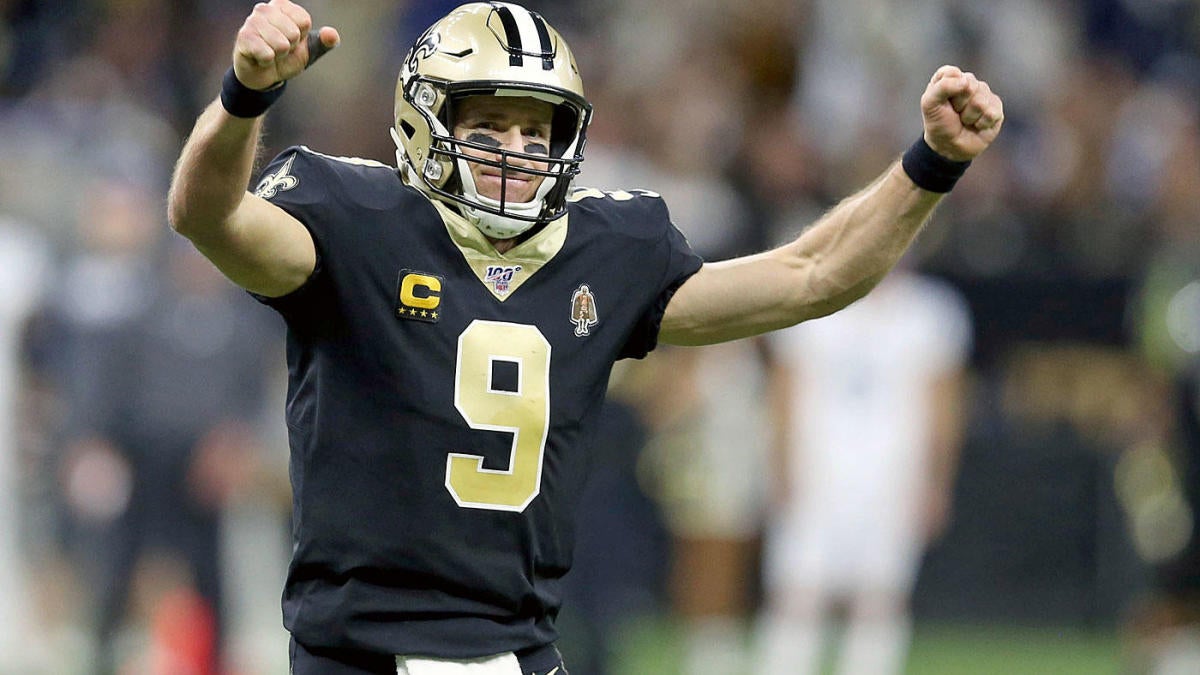 In a rematch of one of the best playoff games of this century, the New Orleans Saints will play host to the Minnesota Vikings in the wild card round. This time, the game is on New Orleans’ turf, which should benefit them in more ways than one. The Saints are better offensively and defensively at home than on the road, while the Vikings were only 4-4 away from the friendly confines of US Bank Stadium this season.

The Saints also enter this game with the red-hot Drew Brees coming off a Player of the Month award in December, while the Vikings stumbled down the stretch, losing three of their last five games. (They did not play many of their starters in the regular-season finale, but still lost two of four before that, including the de facto NFC North title game.) The last time we saw the Vikings’ starts on the field, they were getting blown out by the Packers. Hopefully, for all of our sakes, we get a more entertaining game than that on Sunday.

Before we break things down, let’s go over how you can follow all of the action on Sunday.

When the Saints have the ball

The first thing any defense has to account for when playing against the Saints is Michael Thomas. The issue is that he’s essentially impossible to deal with. Thomas has great size (6-3, 212 pounds) and strength, velcro hands, and unmatched box-out ability on quick-breaking routes, which make up the large majority of his targets. As we noted when breaking down the Brees-Thomas connection:

Thomas’ 2018 and 2019 seasons are the only seasons in the history of the league where a player has been targeted at least 120 times and caught at least 80 percent of those throws. You have to drop the threshold all the way down to 71 targets to find another wide receiver who hauled in at least 80 percent of throws in his direction. And even then, Austin Collie’s 81.7 percent catch rate still falls short of the marks Thomas has posted in each of the past two seasons.

According to Sports Info Solutions, Thomas had 106 catches on throws within 10 yards of the line of scrimmage this season. That’s second among any player in the past five years, with only Christian McCaffrey’s 2019 season coming in ahead of him.

Brees and Teddy Bridgewater are a combined 32 of 36 for 310 yards, 18 first downs, and three touchdowns on slant routes to Thomas this season. Those 32 catches, 36 targets, 310 yards, 18 first downs, and three touchdowns are all the best mark any receiver has posted on slant routes in any of the past four seasons. The top-10 list from those four seasons includes Thomas four times, illustrating just how well this particular route has worked ever since he entered the league.

Brees will pepper Thomas with throws in any and every situation — including when he’s well-covered, which admittedly is not all that often. The Saints will line him up outside or in the slot, which means he’ll see a whole lot of each of the Vikings’ cornerbacks. He’s likely to see his greatest success against the one with the best reputation: Xavier Rhodes, who is flat-out not the same guy this year. Rhodes allowed a 127.8 passer rating on throws in his direction this season, per Pro Football Focus, a figure that ranked 133rd among 141 cornerbacks who played at least 100 snaps in coverage.

So who wins Saints vs. Vikings? And what critical X-factor makes one side of the spread a must-back? Visit SportsLine now to see which side of the spread you should be all over Sunday, all from the football expert who has hit 31 of his past 40 picks involving Minnesota.

Rhodes typically aligns to the offense’s left side, with Mike Hughes across from him now, and Mackensie Alexander in the slot. (Alexander hasn’t been practicing this week.) Thomas is obviously the primary worry of that trio, but Ted Ginn is capable of beating anybody in the league on a deep route if they forget about him; Tre’Quan Smith has made plays when given his rare opportunities; the Saints will occasionally split Taysom Hill out wide or into the slot and try to get him the ball in creative ways as well.

Of course, the secondary passing game options in this offense are not the non-Thomas wide receivers, but running back Alvin Kamara and tight end Jared Cook. The Vikings’ defense did a good job with backs (11th in DVOA) and tight ends (first) this season, with the Harrison Smith-led middle of the pass defense holding up far better than the guys on the perimeter. New Orleans did not do as much of the “just swing the ball out to Kamara and let him shake guys” stuff as they had in previous years, which makes sense because Kamara was not quite as good at shaking tackles as he was in previous years. He finally appeared to be truly getting over his ankle injury over the final few weeks of the season, though, so perhaps we see a return of that type of thing in the playoffs.

It’s easy to say that the Vikings need to find a way to get pressure on Brees without blitzing, but A. duh; B. the Vikings rank in the bottom third of the league in blitz rate; and C. Brees gets rid of the ball so quickly, specifically because the Saints’ passing offense is designed to neutralize pressure. The offensive line in front of him does a good job of keeping rushers out of his face, but its true strength is on the outside. That’s where Minnesota’s best rushers are, but the primary way to bother Brees with the rush is actually up the middle. Brees rarely escapes the pocket to the outside; instead, he prefers to climb the pocket, reset himself, and load up to throw. Getting pressure up the middle prevents that climb-and-reset type of game, forcing him to do something he’s not as comfortable with. That makes Linval Joseph, Shamar Stephen, and Jaleel Johnson key figures in this game.

One thing you shouldn’t expect from the Vikings defense is for them to beat themselves. They missed only 68 tackles this season, second-fewest in the NFL. They also took only 83 defensive penalties, fewer than any other team in the league. They excelled at stopping the run in power situations, allowing only a 49 percent conversion rate on third or fourth down runs with two or fewer yards to go — the best mark in the league. They also allowed a touchdown on only 43.8 percent of red zone trips, the second-lowest rate in the NFL. Situationally and discipline-wise, they are very, very strong.

The one place to hurt them in the run game was with plays that tested the edges of the defense. That makes this seem like a game designed for more Kamara than Latavius Murray, which actually seems just fine by the Saints, who have been giving Kamara more carries in recent weeks than they were earlier in the season.

When the Vikings have the ball

At this point, pretty much everyone knows what to expect with the Vikings offense: a lot of Dalvin Cook, and a lot of play-action passing. Minnesota had the fourth-highest situation-neutral run rate in the NFL this season, per Sharp Football Stats, handing it off on 47 percent of plays with the scoring margin within 14 points in either direction. (It was 53 percent on first and second downs in those situations.)

The Saints ranked a very strong fifth in DVOA against the run this season, per Football Outsiders, but they did most of that run-stopping with Marcus Davenport and Sheldon Rankins in the lineup. Granted, the Saints allowed only 236 rushing yards on 61 carries (3.87 per carry) without that duo in the final three weeks of the season, but those games were against a banged-up Colts team whose defense got shredded early and often, the Derrick Henry-less Titans, and the rotting corpse of the Panthers. That’s not exactly a murderer’s row of opposing run games.

Cook says he is fully healthy after taking the last few weeks off to rest his injured shoulder, and if he is, then he’s one of the tougher tests the Saints defense has faced all year. Cook had 13 runs of 15 yards or more this season, per Pro Football Focus, eighth-most in the league despite his missing two-plus games due to injury. Cook also excelled at breaking tackles, ranking 16th in elusive rating among the 68 backs with 50 or more carries this season. The Saints, like the Vikings, rarely missed tackles this year, as their 86 missed tackles were third-fewest in the league.

Minnesota’s season turned around when, in Week 5, they began marrying their run game with an aggressive play-action attack. Through the first four games of the season, Kirk Cousins threw just 28 play-action passes, per Pro Football Focus. From Week 5 on, he threw 114. That’s jumping from an average of 7 play-action passes per game to more than 10. Play-action went from accounting for 26 percent of his pass attempts to 33 percent, and on those throws, he had a 141.2 passer rating with 13 touchdown tosses against only one interception.

The Saints pass defense was among the most vulnerable in the league to play-action concepts, allowing 8.0 yards per pass after a run fake as opposed to 6.0 on straight dropbacks, per Football Outsiders. That 2.0 yards per play differential was seventh-largest in the NFL. The Saints will have to be particularly mindful of bootleg action, which the Vikings use more than almost any team in the league. Cousins completed 40 of 56 passes for 663 yards on the boot, per Sports Info Solutions, giving him the second-most completions and attempts on those plays, and the most yards in the league.

The Saints, though, have Marshon Lattimore to sic on Stefon Diggs. Lattimore excelled in shadow coverage this season, shutting down the likes of Amari Cooper, Mike Evans, and Julio Jones, to name a few. After a slow start in Weeks 1 and 2, Lattimore allowed a 68.1 passer rating on throws in his direction the rest of the way, per PFF. With Lattimore likely following Diggs, that leaves former Giants Janoris Jenkins and Eli Apple to deal with Adam Thielen and Olabisi Johnson. Apple has not practiced this week and would presumably be replaced by Patrick Robinson. The Vikings should have an advantage there, particularly with Thielen, but he has done almost nothing since returning from a multi-week injury absence, catching only three passes on seven targets across two games.

The best place to beat the New Orleans pass defense is probably on the interior. They ranked 24th in DVOA on throws over the middle, 22nd against slot receivers, and 16th against running backs. If Johnson, tight end Kyle Rudolph, and either Cook or backup Alexander Mattison can get matched up on a linebacker as opposed to a slot corner or safety, that’s a matchup Minnesota should look to exploit.