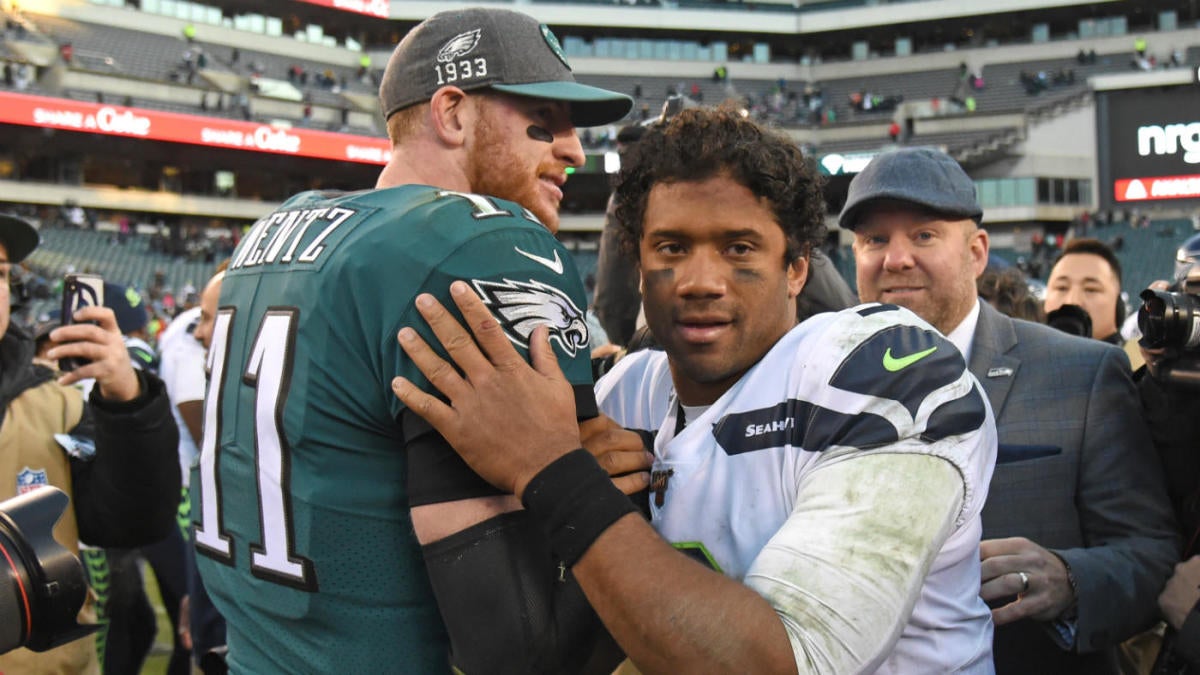 The final game of Wild Card Weekend features the final team to clinch a playoff spot (the Eagles) hosting the loser of the final game of the 2010s (the Seahawks). Philly won the NFC East with four consecutive wins down the stretch, while Seattle lost three of its final four contests to drop down to the No. 5 seed.

You might think the Eagles should be heavy underdogs given how bad they looked for much of the season, but remember that A) winners of bad divisions have had plenty of success in their home playoff games over the years; B) both teams are incredibly banged up at the moment; and C) the Eagles actually had a better point differential (plus-31) than the Seahawks (plus-7) this season.

In other words, this is a game that sure looks like it could go either way. Let’s break things down.

Let’s start in the backfield, because if we’re being honest, that’s all the Seahawks really care about anyway. In their first game without all three of Chris Carson, Rashaad Penny, and C.J. Prosise, the Seahawks utilized a timeshare between rookie Travis Homer and re-signed veteran Marshawn Lynch. Homer led the backfield in snaps (67 percent) and total touches (15), and was generally more productive (92 total yards to Lynch’s 34), but Lynch was the preferred option in short yardage and near the goal line.

This type of split makes sense for the Seahawks to use against the Eagles. Marshawn’s presence on the field was essentially a tip-off that the Seahawks planned to run the ball, and the 49ers bottled him up pretty easily, as nine of his 12 carries gained two or fewer yards. The Eagles should be able to similarly bottle him up, as they have one of the NFL‘s strongest run defenses (fourth in DVOA), and that defense’s strength is up the middle with Fletcher Cox. Homer is more able than Lynch to test the perimeter of the defense, and he looks like a more capable receiver as well.

The Seahawks came away from last week’s game impressed with Homer’s versatility and pass-blocking abilities, and Pete Carroll has been hyping him up ever since Carson went down. If you’re expecting a Lynch takeover of the backfield, you’re probably going to be disappointed.

Of course, the way you want to beat the Eagles is by attacking their cornerbacks anyway. Philly has been strong up the middle for most of the season, but for most of the year, all of their corners were completely burnable. To wit: through the first 12 games of the season, Jalen Mills allowed a 97.6 passer rating on throws in his direction, Sidney Jones allowed 98.9, Ronald Darby allowed 99.6, Avonte Maddox allowed 101.1, and Rasul Douglas allowed 111.0. During their season-ending four-game winning streak to clinch the NFC East, though, the Philly pass defense clamped down a bit. Jones allowed a passer rating of 7.0 during that four-game span, while Maddox was at 80.6, and Douglas was at 86.1. (Mills dropped to 125.6. Yikes.)

Can that improvement hold against Russell Wilson, Tyler Lockett, and D.K. Metcalf? I suppose it depends how much weight you put on the fact that the Eagles’ final four games of the season came against Eli Manning, Dwayne Haskins, injured Dak Prescott, and Daniel Jones. Lockett appeared to get back to full strength over the final few weeks of the season, and he should have a plus matchup working against Maddox in the slot. Metcalf has a size advantage over whomever he lines up against on the perimeter. David Moore figures to operate as the No. 3 receiver, but the return of Luke Willson means we could see more two-tight-end sets featuring him and Jacob Hollister.

It’s foolish to expect it because it’s just not in their nature, but the Seahawks should try to throw on early downs in order to avoid needing Wilson to bail them out on third-and-longs. The biggest mismatch in this game is Philly’s defensive line against Seattle’s offensive line, and inviting that defensive front to aggressively rush upfield is, as the kids say, not what you want. Wilson is obviously fully capable of making something out of nothing, escaping pressure, and finding his man downfield, but it would be better for the Seahawks if he didn’t have to do that.

When the Eagles have the ball

The matchup we’ve all been waiting for is J.J. Arcega-Whiteside, Greg Ward, and Robert Davis against Shaquill Griffin, Tre Flowers, and … actually that’s it, because the Seahawks stay in their base defense more than any team in the league. In all seriousness, that could actually be just fine for Seattle in this matchup, because the Eagles’ best pass-catchers right now are their tight ends (Dallas Goedert and Zach Ertz, if healthy) and running backs (Boston Scott and Miles Sanders, if healthy). With Alshon Jeffery, DeSean Jackson, and Nelson Agholor all likely out, they’re not going to spread you out with three wideouts and take advantage of a linebacker on a receiver in coverage. If there was any first-round matchup the Seahawks wanted, it was probably this one.

Bobby Wagner and K.J. Wright are still excellent in coverage, and Quandre Diggs has been fantastic over the middle since arriving in Seattle. The Seahawks still play a ton of Cover 3, while provides opportunity for tight ends to beat them on seam routes, and the size and strength of Goedert and Ertz could hurt them on those plays. But if Ertz makes it onto the field, he’s likely not going to be 100 percent. Carson Wentz showed last week that he is willing to pepper Dallas Goedert with targets if he’s the No. 1 tight end, but Josh Perkins is not as much of a No. 2 threat.

It’s honestly pretty difficult to analyze this side of the ball, because we just don’t know which of the Eagles will actually be available for the game. Ertz is questionable at best, and at different times this week reporters have been leaning toward him not playing, or being able to get cleared. Sanders has yet to practice this week. Lane Johnson has been getting in limited sessions, but there is skepticism regarding his ability to get on the field. Any one of those three being able to play changes things quite a bit. Two or more of them getting on the field changes the matchups entirely. (Meanwhile, guard Brandon Brooks also went on IR this week.)

Johnson’s presence or absence, in particular, has tended to have a strong effect on Wentz’s performance during his career, though he has been able to hold up without Johnson on the field the past few weeks. The Jadeveon Clowney and Ezekiel Ansah-led front of the Seattle defense has a far better chance to get pressure on Wentz if Johnson can’t get on the field, but Wentz, like Wilson, has an innate ability to escape from the pocket and make plays down the field.

The backslide of Seattle’s run defense provides an opportunity for the Eagles to do some work on the ground. Sanders has run well all season, and Scott’s performance when he’s gotten an opportunity has been extremely encouraging. If the Eagles can get things working in the run game, they can neutralize some of their injury-related weaknesses along the line and on the perimeter. The question is whether or not that will be enough for them to overcome all of those injuries, and at the moment, that’s pretty tough to say. This is the toughest game of wild card weekend to predict, and I could easily see anyone’s mind changing several times based on the Friday afternoon injury report, and then again based on the inactives list an hour and a half before the game.