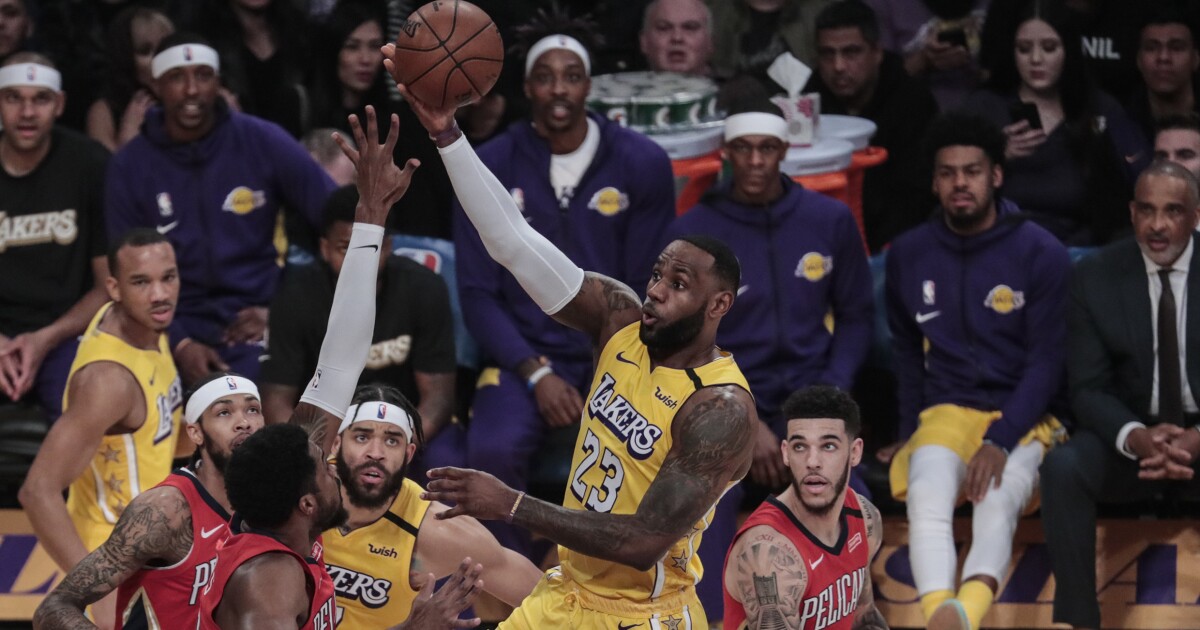 Two years after the Lakers said they would absolutely not consider trading Brandon Ingram, and three years after they called Lonzo Ball the face of the franchise, the pair of No. 2 overall picks heard their names announced during pregame introductions in Staples Center as members of the visiting Pelicans.

The crowd mostly cheered. Later a tribute video played in the arena, welcoming back those two as well as Josh Hart with clips of some of the best moments they experienced as members of the Lakers.

The game started with a three-pointer from Ball, but throughout the course of the game it was clear why the Lakers sacrificed the promising young players to get better.

The Lakers won 123-113 and Anthony Davis, for whom the three were traded, scored 46 points, after scoring 41 against the Pelicans in their first meeting. Ingram and Ball also had productive nights: Ball finished with 23 points and Ingram with 22.

James scored 17 points and had 15 assists, while Danny Green finished with 25 points.

In the Lakers’ first meeting with the Pelicans, Davis’ teammates tried to force the ball through him, wanting him to have a big night. Friday night, feeding him came more naturally to them.

“I was running down trying to get in the post and just score,” Davis said of the Lakers’ November game in New Orleans. “It was an emotional game for me, I just wanted to play as good as possible. Tonight, I didn’t have that many emotions because I got that out of the way the first game. It was just another game we just come out and play and did whatever I can to get the win.”

Said Vogel: “I thought we played a better basketball game this time around. … Even when they were making runs I felt like we were in control.”

Like in Wednesday’s game against the Phoenix Suns, the Lakers started hot. They scored 42 points in the first quarter, making 60.9% of their shots, led by Green who made five first-quarter threes and scored 17 in the period.

The Lakers had hoped to take a lesson from their win over the Suns. Despite having a 36-point lead on Wednesday, the Suns got to within five in the fourth quarter and ultimately lost by just 10. In looking back, the Lakers saw complacency in themselves once they’d built that big lead, and a failure to react to the Suns’ adjustments.

“This is a team that you have to contain the basketball and try to take away the three,” Vogel said.

New Orleans cut the Lakers’ lead to single digits with a short jumper from Ball.

With less than four minutes remaining, Davis elevated to catch a lob from James. With Ingram clinging to his arm, Davis scored to extend the Lakers’ lead to 11. More than once Friday night, Davis reached farther than most players can physically reach to produce spectacular dunks off lobs.

“I just see the ball and I just try to go get it,” Davis said. “I told my teammates at the beginning of the year if you throw it towards the rim I’ll find a way to get it.”

Dunks by Ball and Ingram cut the Lakers’ lead to seven, but the Lakers were able to hang on.

For Davis, it was a game that showed growth. His own growth and increasing comfort in the Lakers’ offense.

“I’m finding my way,” Davis said. “Obviously we’re a good team, we got a lot of players who can score the basketball and players who can play. We’re just in a flow and a groove right now where everybody’s clicking.”

It was a game of growth for Ball, too. For the first time in his career he has scored 20 or more points in back-to-back games.

“I enjoyed my time here, it’s my hometown,” Ball said. “I loved playing in front of them. Unfortunately, I was hurt both years, which is terrible for me — and I know for the fans. But I wish them the best going forward.”