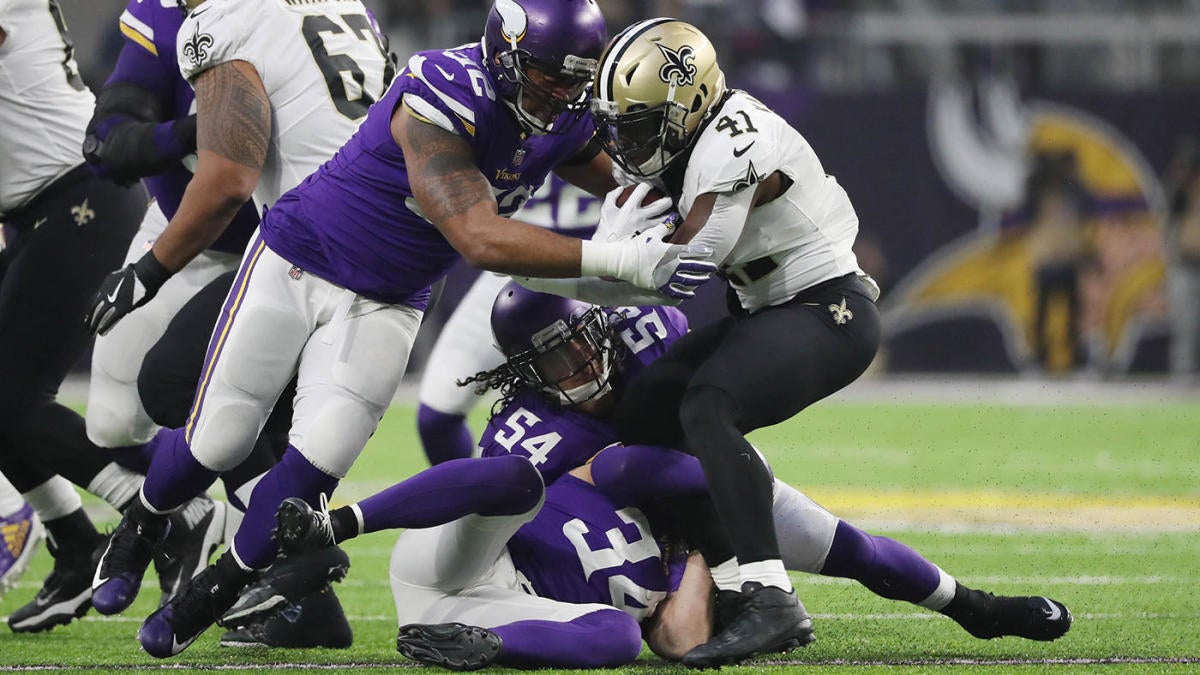 If you’ve been alive longer than two years, you’ll know why the wild-card matchup between the Vikings and Saints brings an added bit of drama. And while that 2018 matchup featuring the Minneapolis Miracle happened in Minnesota, it’ll be New Orleans hosting the rematch.

That divisional round game saw the Vikings jump out to a 17-0 lead heading into halftime, but the Saints marched back to claim a 24-23 lead with just 25 seconds left. Then-Vikings quarterback Case Keenum heaved up a prayer to Stefon Diggs with 10 seconds left, and that prayer was answered when two Saints defenders collided into each other as Diggs made the catch, turned and sprinted into the end zone for the 29-24 win.

The Saints would reach the playoffs again the following year, but saw their title hopes again end in heartbreak thanks in large part to the play that spurred the addition of pass interference reviews to the rulebook. Will the third time be the charm for New Orleans?

“This is a rematch of a classic playoff game two season ago, which was won by the Vikings on the Minneapolis Miracle. But this one is in New Orleans. The Saints are a much better team at home and Drew Brees and the offense move it much better inside the Superdome. The Vikings have had defensive issues this season, and I think Brees will exploit those. Kirk Cousins, who has never won a playoff game, won’t be able to keep up. Saints move on.” — Pete Prisco on why he has the Saints winning 33-23

“With Cook healthy, the Vikings should renew their play-action focus, and it will result in points. I’m not sure how they stop the Saints from scoring, though: Brees is playing lights out right now and may have benefited from missing six games because his arm doesn’t look tired the way it did this time last year. Michael Thomas is the best wide receiver in football right now. This over has been steaming up all week and I expect it to finish north of 50 — I think this game is played in the 60s, but I would grab Over 49 if you can. In a shootout, take the points with the Vikings before it comes back down.” — Will Brinson on why he has the Vikings covering

“Going into this game, I have two big issues that are keeping me from picking Minnesota. For one, they choked in every big game they played in this year. The Vikings had four regular season games against teams that finished with double-digit wins and they went 0-4 in those games. They got blown out by the Packers in Week 16, they were getting blown out by the Seahawks in the fourth quarter of a Monday night game (they trailed 34-17) in Week 13, they lost to a Chiefs team that didn’t have Patrick Mahomes in Week 9 and they also lost to the Packers in Week 2. They’ve done absolutely nothing to make me think that they can beat a good team. The other thing that worries me about the Vikings is their secondary, and let me just say that I’m not the only one who feels this way.” — John Breech on why he has the Saints winning 34-23

“I just don’t really think this is a great matchup for the Vikings — a team that I happen to think is quite good, but also needed to win the division to have a shot at reaching the Super Bowl. Kirk Cousins’ struggles under pressure — both from defensive linemen and the magnitude of the moment — have been documented to death and we saw it as recently as Week 16, when the Vikings allowed five sacks to the Packers and lost by double digits. The Vikings will now be tasked with blocking the likes of Cameron Jordan. The Saints’ defense is also fifth against the run by DVOA, so they should be able to slow down Dalvin Cook, who is expected to return from injury.” — Sean Wagner-Mcgough on why he has the Saints covering

The SportsLine Projection Model, which simulates every NFL game 10,000 times, is up over $7,000 for $100 players on its top-rated NFL picks since its inception four-plus years ago. Its biggest edge in this game comes on the spread, with one side cashing in 55% of simulations. See the model’s spread, total and moneyline plays only at SportsLine.

“This is a serious prove-it opportunity for Minnesota, who could easily advance to the NFC title game as long as it can escape Louisiana with a win. That’s a big if, though, and the oddsmakers aren’t crazy to forecast this as a two-score game. A ton of Dalvin Cook and Kirk Cousins play-action should keep the Vikings in play, but the Saints might be the most explosive team in the NFC, and their quick-strike attack should offset the Danielle Hunter-headlined pass rush. Alvin Kamara. Michael Thomas. Drew Brees. It’s all too much to bet against, especially at home against Mike Zimmer, who’s suspect in big games.” — Cody Benjamin on why he has the Saints winning 29-24

“I’m a fan of Kirk Cousins, and I’m glad that he finally turned into a good quarterback for the Vikings, but let’s be real, who is picking them to beat the Saints in New Orleans? Drew Brees has been on a tear since breaking the record for most career touchdown passes. Over the past four games, he has completed 75.4 percent of his passes for an average of 297 yards per contest and has thrown 15 touchdowns and no interceptions. He of course has an incredible weapon in Michael Thomas, who set the single-season reception record this year, but the real story is the emergence of running back Alvin Kamara.” — Jordan Dajani on why he has the Saints winning 31-21

Why to take Vikings

Why to take Saints