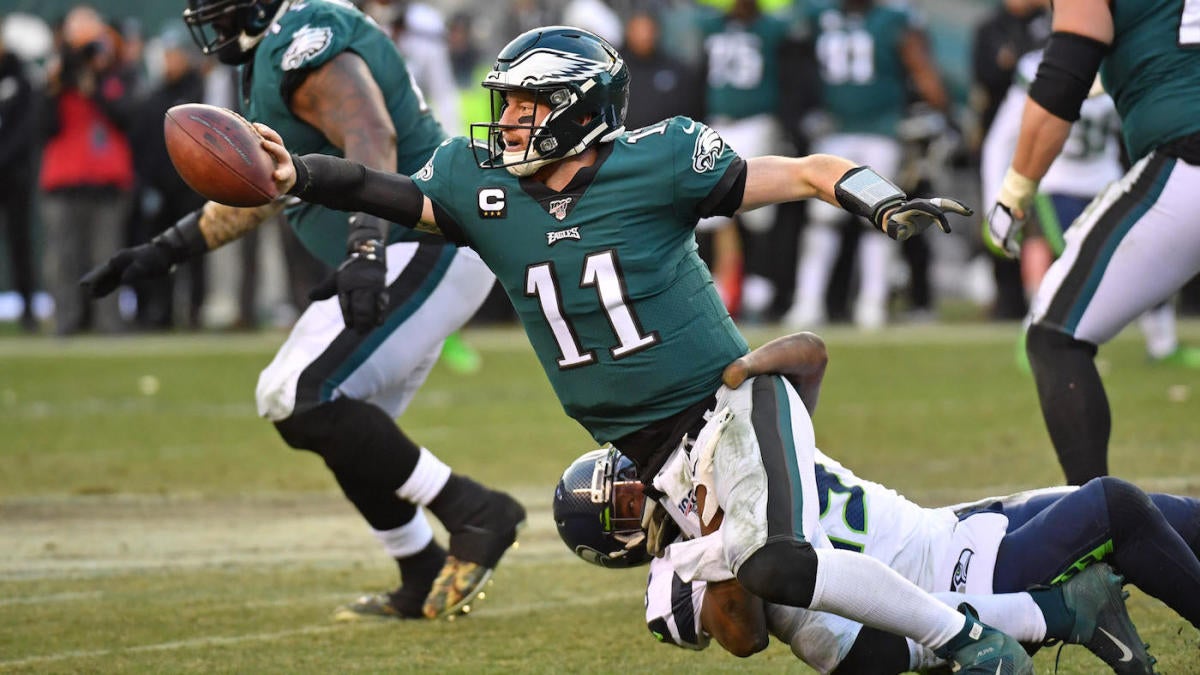 Of the four games on Wild Card Weekend, only one is a rematch of a regular-season matchup. Back in November, the Seahawks went into Lincoln Financial Field and shut down a beat-up Eagles offense en route to a 17-9 win.

Fast forward to January 2020, and the Eagles offense isn’t any healthier. Receivers Alshon Jeffery and Nelson Agholor returned and were lost again due to injury, as was right tackle Lane Johnson. Replacement receiver J.J. Arcega-Whiteside battled a foot injury throughout December, rookie running back Miles Sanders left the team’s win-and-get-in victory over the Giants last Sunday and right guard Brandon Brooks was lost for the year in that game as well. When Carson Wentz takes the field on Sunday, he might as well be meeting some of the players in the huddle for the first time. But the Eagles have shown in the past to never count them out once the playoffs start.

The Seahawks are dealing with their own injury issues, losing their top three running backs late in the season and reuniting with franchise legend Marshawn Lynch as a result. Lynch scored a touchdown in his season debut on Sunday, but it wasn’t enough for the Seahawks to beat the 49ers and earn the division title, setting them up to hit the road this weekend.

“Both of these teams are really banged up. But they were that way when they met in early December, a game won by the Seahawks on this same field. This time, the Eagles will win it. Carson Wentz is playing at a high level and I think that continues. The Eagles pass rush will steal the show here. Eagles will advance.” — Pete Prisco on why he has the Eagles winning 26-20

“So how on Earth can we expect the Eagles to win this game? The answer is actually simple: Seattle refuses to let Russell Wilson cook. The only time Russ is allowed to play without the shackles of a run game is when the Seahawks are in a desperate spot. Otherwise they keep pounding the rock and hope their defense can stop someone. But that defense is not good enough to make stops this year, and the run game isn’t dominant. The Eagles are the worst possible matchup for Seattle in that sense, because Philly’s run defense is actually good and they have to be torched through the air.” — Will Brinson on why he has the Eagles covering

SportsLine’s top NFL expert Mike Tierney has a 58-31 mark in his last 89 NFL picks, and he’s got a strong play on the Seahawks-Eagles matchup as well. Find out which side of the spread Tierney loves only at SportsLine.

“I hate picking against the Eagles, because there’s no NFL team that plays better as an underdog than Philly, but I also hate picking against Russell Wilson. Basically, no matter who I pick in this game, I’m going to end up hating myself for it, but I will say, I’ll definitely hate myself a little less if my pick is right. In the first ever ‘Injury Bowl,’ I’m taking the Seahawks, but only because their skill players are slightly above practice squad level.” — John Breech on why he has the Seahawks winning 20-17

“This really just comes down to Russell Wilson, who in most other seasons (that don’t feature Lamar Jackson) would be the MVP. Wilson is capable of overcoming less than ideal situations to turn sure-fire losses into miraculous wins. Even though the Seahawks won two more games than the Eagles, I’m not certain they’re a better team. The Eagles actually own a better point differential than the Seahawks, oddly enough. But what I am certain of is that Wilson is better than Wentz and he’ll have opportunities to take apart an Eagles defense that is susceptible against the pass.” — Sean Wagner-McGough on why he has the Seahawks covering

The SportsLine Projection Model, which simulates every NFL game 10,000 times, is up over $7,000 for $100 players on its top-rated NFL picks since its inception four-plus years ago. Its biggest edge in this game comes on the spread, with one side cashing in 58% of simulations. See the model’s spread, total and moneyline plays only at SportsLine.

“The Seahawks have had the Eagles’ number, beating Philadelphia in seven of the teams’ last eight matchups. Russell Wilson is also a perfect 4-0 against the Birds. But things have changed since their last meeting. Carson Wentz is playing unshackled alongside a bunch of hungry and unsung heroes, and Jim Schwartz’s defense has been increasingly clutch, particularly at home. Wilson will keep Seattle in it until the end, no doubt, but a plodding Marshawn Lynch won’t be able to save a banged-up Seahawks team from overcoming Doug Pederson’s playoff magic.” — Cody Benjamin on why he has the Eagles winning 28-23

“Carson Wentz passed for a career-high 4,039 yards this season, which is actually the most yards in a single season in Eagles franchise history. Even though his wide receiving corps is decimated, Wentz has found a way to get the job done in big games. Still, I think the Seahawks are a better team, and I’m taking Russell Wilson to come through in a close game.” — Jordan Dajani on why he has the Seahawks winning 23-20

Why to take Seahawks

Why to take Eagles