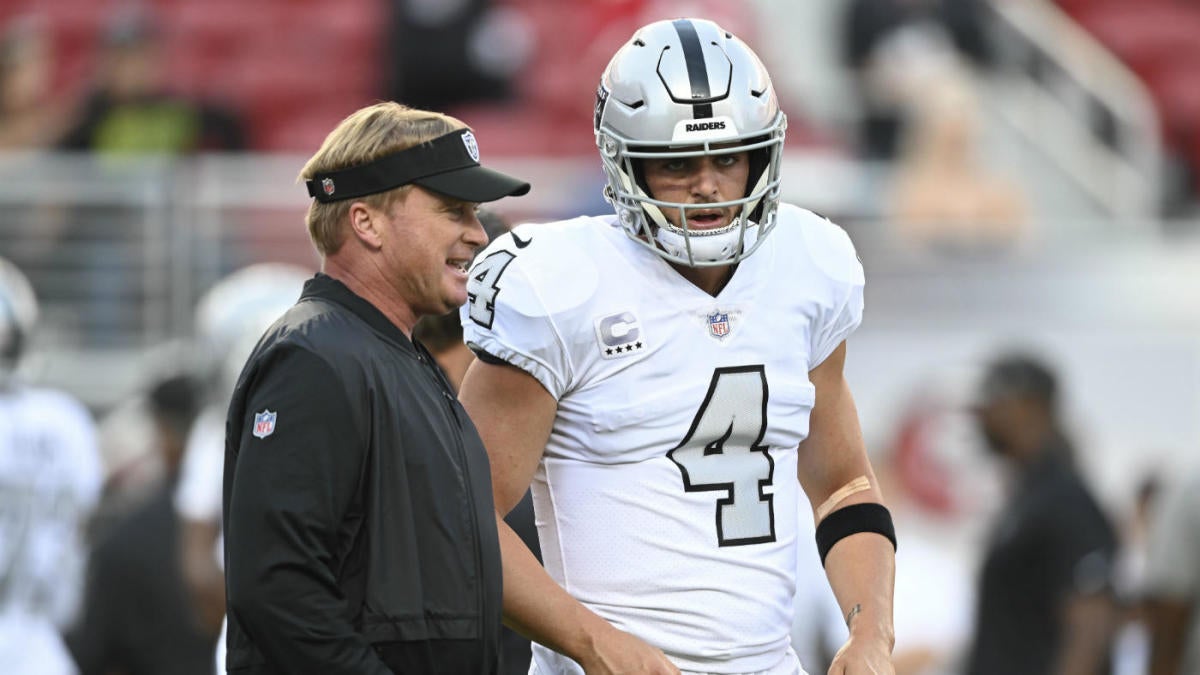 After spending the past 25 seasons in Oakland, the Raiders will be ditching the Bay Area later this year to head to Las Vegas and one of the biggest questions, as they get ready to make that move, is whether or not quarterback Derek Carr will be going with them.

Although Carr put up career numbers in 2019, it’s still not clear if Raiders coach Jon Gruden is completely happy with the way that Carr has been running the team’s offense. Gruden loves to see his quarterbacks throw the ball down the field, which is something that Carr rarely does. The Raiders quarterback averaged just 4.9 air yards per completion, which ranked dead last in the NFL for any full-time starter. It also ranked below guys like Joe Flacco, Jacoby Brissett, and Mitchell Trubisky, who all averaged 5.1 air yards.

Carr also has 55 career losses, which is the second-most ever for any quarterback through their first six seasons.

Gruden was asked about Carr’s future during his season-ending press conference this week, and although he had some good things to say, he didn’t exactly come out and say that Carr would definitely be the team’s starting quarterback next year.

One thing Gruden liked about the way Carr played was his ability to adapt to all the change that the Raider went through, but again, Gruden definitely didn’t exactly offer a ringing endorsement for his quarterback by saying he would be with the team in Vegas next year.

“I think [Carr] played more of a role as a coach on the field with all the change that we had around him,” Gruden said. “We had different receivers almost every week, different tight ends, different backs, different linemen. And I think his patience and ability to coach guys in practice and on the grass on game day was a real area of improvement.”

CBS Sports NFL Insider Jason La Canfora reported in late December that the Raiders will at least consider making a change at quarterback, although there’s also a chance they’ll stick with Carr. If Gruden’s ready to move on, getting rid of Carr this offseason would make some sense, especially from a salary cap standpoint. Dumping Carr would only cost the team roughly $5 million in dead cap space, which is a bargain when you consider that it would have cost them $27.5 million in dead cap space to get rid of him in 2020, according to Spotrac.

The argument for keeping Carr is that his numbers went up this year, which was his second season in Gruden’s system. In 2019, Carr finished with a career-high in completion percentage (70.4), passing yards (4,054) and yards per attempt (7.9).

“I don’t think it’s a surprise that my second time being in the same system in year two has been both my best years,” Carr said. “This by far, statistically, (was) career highs in almost everything except wins. So, we need to get more wins. And then I think everyone will chill out.”

For now, Carr is going to go into the offseason knowing that there are plenty of questions swirling around about his future.

“We’ll see when that time comes,” Carr said. “They’re probably sick of us talking about it, just like I am. I had some good meetings with my coaches. And I’m looking forward to Las Vegas.”

If the Raiders do cut ties with Carr, the could make the quarterback’s first few days in Vegas a little awkward, and that’s because Carr bought a house next door to Gruden. The good news for Carr is that if he needs to sell the house, it seems that there’s already a buyer lined up.