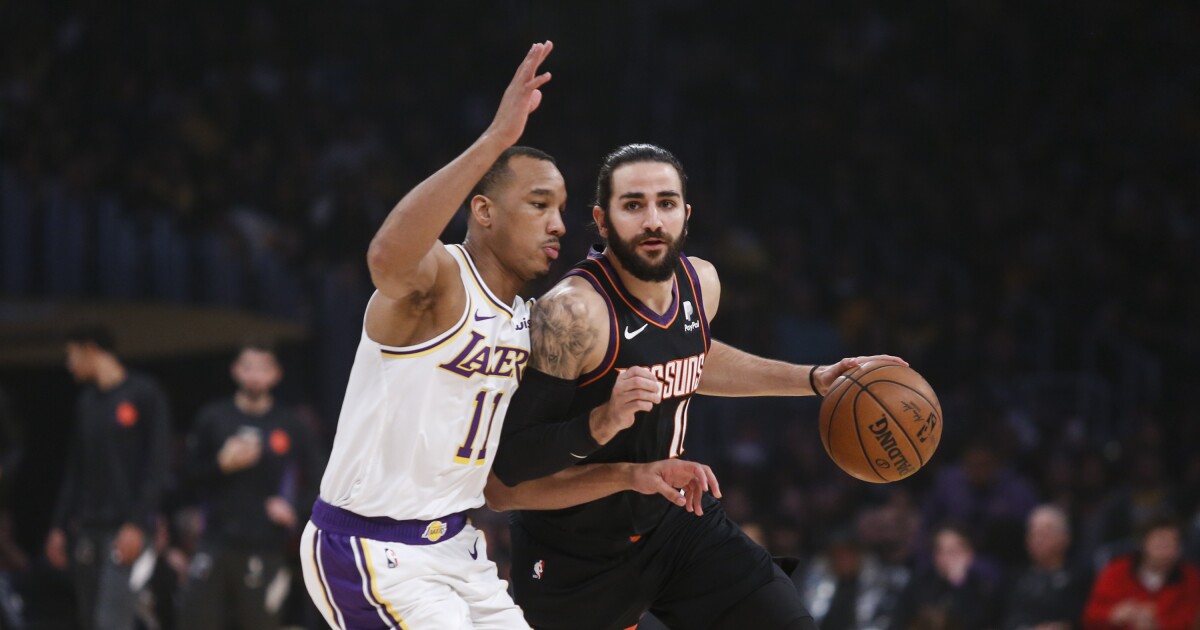 In a locker room often filled with music and noise and big personalities, on a team led by superstars LeBron James and Anthony Davis, Lakers guard Avery Bradley goes about his business quietly, but with purpose.

His business is being one of the NBA’s best defenders, displaying the energy and tenacity that have twice won him a spot on the league’s All-Defensive team. He doesn’t call attention to himself, but his teammates know and appreciate what he can do.

“Oh man, he’s a dog. Ruff. A dog in a good way,” center Dwight Howard said, smiling after he barked to emphasize his point.

“He gets up there, he plays and guards the best perimeter player on the other team. He doesn’t let them breathe. I really like what he brings to our team — the intensity on the defensive end, and on the offensive end, he’s a silent killer. He doesn’t say too much, but he’s a laser from those two-point jump shots.”

Those shots hadn’t been falling lately for Bradley, who missed 13 games from mid-November to mid-December because of a hairline fracture in his lower right leg. His defensive presence was solid — coach Frank Vogel praised him for setting a stifling tone in the Lakers’ victory over Dallas last Sunday — but he had difficulty regaining his offensive touch and timing. He knew he had to be patient, but that wasn’t easy.

“My teammates and the coaching staff, they’d always be in my ear, reminding me that we don’t practice much so it was going to take some games to get my legs under me, and that’s what has happened,” said Bradley, who was traded by the Clippers to Memphis at last season’s trade deadline and signed a two-year free-agent deal with the Lakers last summer. “I’m going to continue to work hard, and I know my teammates have confidence in me. That really helps.”

His patience paid off on Wednesday, when he scored a season-high 18 points in the Lakers’ 117-107 victory over Phoenix at Staples Center. His shooting was an efficient nine for 11, and his playing time of just over 30 minutes was his most since he returned from his injury.

In a game where the Lakers gave up most of a 36-point lead, Bradley was a team-best plus-23. He had only one of their 25 assists, but that’s going to happen when James, who had 12 assists, is the point guard in all but name.

“I just felt more comfortable,” Bradley said of his success on Wednesday. “I was able to move well on the defensive end, and that’s what got my offensive game going. I felt comfortable in my body.

“I’m playing with two great players. My job is to make open shots. I feel like I haven’t done that the past few weeks, but hopefully I can start to do that consistently.”

Vogel said Bradley’s “contagious energy” enabled the Lakers to get off to a solid start defensively as a team this season, and he praised Bradley’s defensive work in the past two games, especially in the group effort that held Dallas to a season-low 95 points and season-low shooting. Carrying that over to the other end of the floor would be a natural progression Vogel hopes to see.

“Obviously, we want to reward him and encourage him to be aggressive on the offensive end,” Vogel said, “and he was [on Wednesday], and he was terrific on that end as well.”

Kyle Kuzma, who contributed 19 points off the bench, has tried to fortify Bradley’s confidence while Bradley has worked to get back to his pre-injury level.

“He has to be aggressive every time out. I told him that. He knows it,” Kuzma said. “Everyone knows what he does defensively. We can count on him every single night on that end. But when his shots are falling like that and he’s aggressive in transition, he’s more of a weapon for us.”

James liked what he saw of Bradley at both ends on Wednesday.

“We’ve been just trying to figure out ways to get him back going [to where he was] before the injury,” James said. “The injury kind of had him out of rhythm, and today we made a point of emphasis of, get him the ball, get him the ball in his spots, and he took it upon himself to be aggressive, and it was great to see that.”

Bradley sees room for improvement in the Lakers’ play, and in his own performance. Their letup against the Suns led Vogel to bring James and Anthony Davis back into the game when both should have been able to rest the entire fourth quarter, but the Lakers couldn’t stop the Suns’ pushback.

“You can never take your foot off the gas pedal. You have to play the right way at both ends.”

The Lakers’ goal, he said, is simple.

“We want to be the team we see ourselves as being,” he said. A few more performances like Bradley had on Wednesday can contribute toward getting them there. “I’ve got confidence,” he said, “that this is going to help me moving forward.”