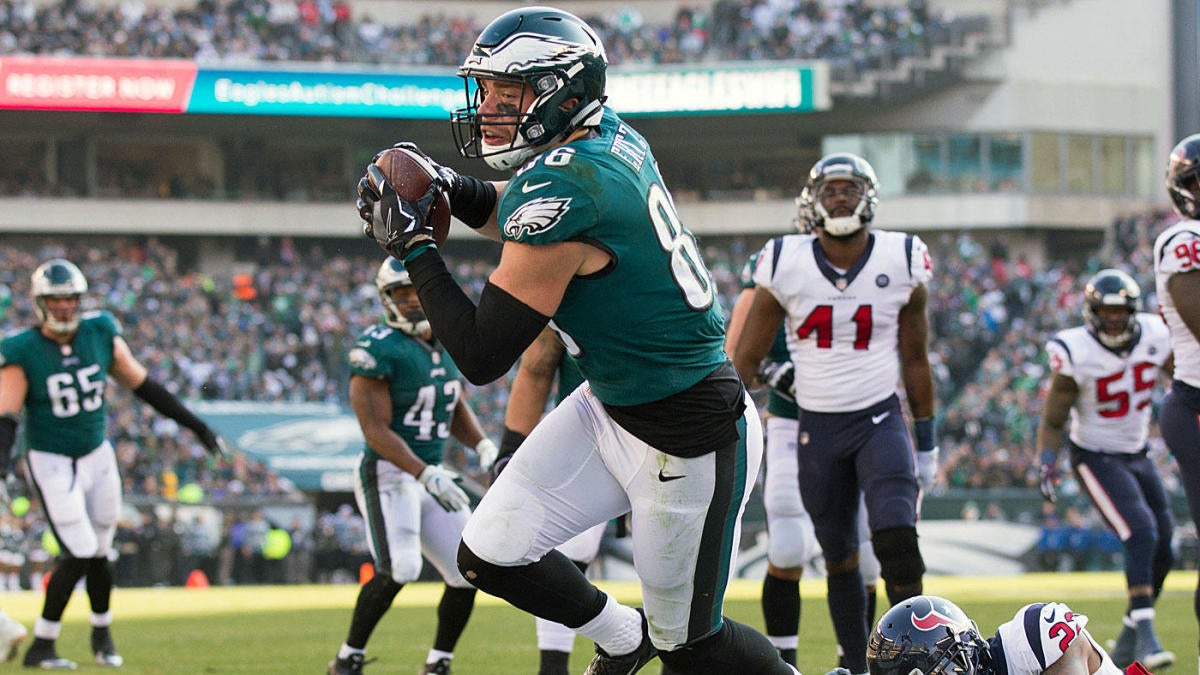 While he has not been medically cleared for contact, Eagles tight end Zach Ertz did practice in a limited capacity on Wednesday, according to the team’s official injury report.

Ertz, who sustained a cracked rib and lacerated kidney during the Eagles’ Week 16 win over the Cowboys, participated in the walkthrough portion of Wednesday’s practice. While Ertz’s injuries typically require a six-week rest and recovery period, the Eagles have not ruled their Pro Bowl tight end out for Sunday’s game against the visiting Seahawks in the NFC wild-card round.

Prior to sustaining his injury, Ertz was Philadelphia’s most consistent player in a season that saw the Eagles’ offense endure a rash of injuries. Ertz, who was selected to his third consecutive Pro Bowl, caught 88 passes this season for 916 yards and six touchdowns. One of his biggest performances of the year took place during the Eagles’ come-from-behind victory over the Giants in Week 14. With the Eagles at just 5-7 and needing a win to keep their NFC East division title (and playoff hopes) alive, Ertz caught nine passes for 91 yards and two touchdowns in Philadelphia’s 23-17 win. The Eagles then went onto win their next three games while capturing their second division title in three years.

Ertz is just one of the Eagles’ injury concerns entering Sunday’s playoff game. The team placed starting offensive guard Brandon Brooks on injured reserve on Wednesday after Brooks suffered a dislocated shoulder during the second half of Sunday’s win over the Giants. The Eagles also made a signing on Wednesday, acquiring receiver Shelton Gibson, the Eagles in the fifth round of the 2017 NFL Draft. Gibson, who caught two passes during Philadelphia’s Super Bowl winning season, caught just one pass in 15 games during the 2018 season.

The Eagles are hoping Gibson can mask Philadelphia’s current injuries at the receiver position. With Alshon Jeffrey already on injured receiver, fellow wideout Nelson Agholor missed Wednesday’s practice with a knee injury. With Agholor in jeopardy of missing his fifth straight game, and with Ertz’s status for Sunday still up in the air, Eagles quarterback Carson Wentz may have to continue to lean on tight ends Dallas Goedert and Joshua Perkins, who caught a combined eight passes for 115 yards and a score in last Sunday’s win over the Giants.

Philadelphia will also need another strong outing from rookie running back Miles Sanders, who totaled 1,327 all-purpose yards this season while averaging an impressive 4.6 yards per carry. On Sunday, the Eagles will face a Seahawks defense that finished the regular season 22nd in the NFL in scoring, 27th against the pass, 22nd against the run, 16th in third down efficiency and 26th in red zone efficiency.