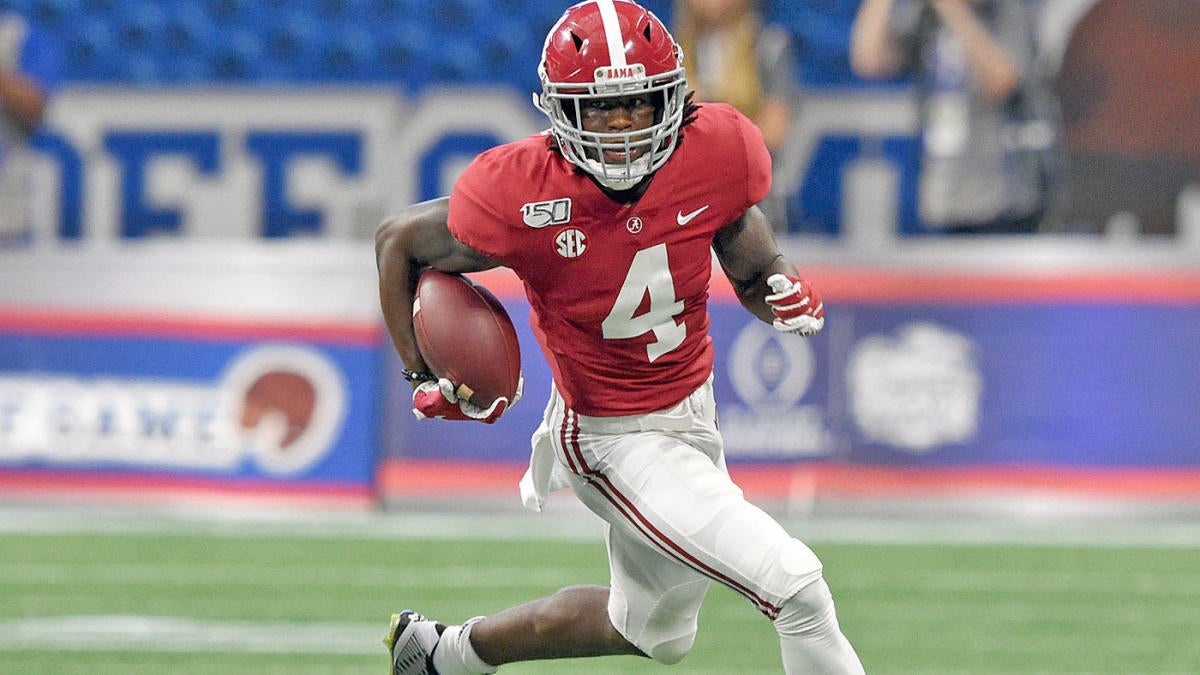 Michigan and Alabama are accustomed to playing in larger games this time of year. In fact, the Crimson Tide have appeared in the College Football Playoff or National Championship all but three years since 2010. It has been an impressive run. There will be several future NFL players on the field Wednesday.

Let’s examine the 2020 NFL Draft prospects that you need to know. You can read more about this matchup and get our expert picks on the game right here.

There are a lot of reasons to like Jeudy but let’s start with what makes him different. Jeudy possesses all the traits of an elite wide receiver: speed, length, great body control, and wiggle after the catch. He is different because of his attention to the finer details such as route running and footwork. There may prove to be a better high-end wide receiver in this draft class but there is also a supreme level of confidence that the Florida native will not bust.

He is a lock for the first round.

The Alabama native is fast and lightning quick. He is built well and fights through contact. It would be a surprise if he is not taken in the first round. Although he primarily lines up in the slot, he could easily play on the edge. When the ball is in his hands, there is a good chance that he is taking it to the house. His body control is really good. Teams will be able to use him in a variety of ways with screens, jet sweeps and more.

The Los Angeles Chargers, Green Bay Packers and Denver Broncos jump out immediately as teams that may have interest in drafting him.

Smith has sure hands and a willingness to block for his teammates on the edge. There is some doubt that he will declare for the 2020 NFL Draft but a second-round grade likely awaits him. The tall but thin receiver is fast but not near as fast as Jeudy or Ruggs. His body control is not what should be expected of a player taken in the first round.

McKinney provides a lot of positional flexibility. He is such a fluid athlete. Despite primarily playing safety, there is confidence that he could play field or boundary cornerback as well. Former Alabama star Minkah Fitzpatrick is a good comparison for him at this stage. Teams should have no hesitation taking him in the first round if character and medical checks turn up alright.

Leatherwood is expected to be a first or second-round pick. He has been playing left tackle for the Crimson Tide all season. He is another big strong player that plays aggressive. His anchor drags a bit but he does a good job playing with leverage and handling counters. His hand fighting could use improvement.

Wills has seen his stock soar in 2019. He went from lightly discussed to first-round lock and potential OT1. The Kentucky native is strong and absorbs shock well. He is quick into pass protection and has improved his lateral quickness. If there is one area for improvement, it would be his handling of stunts and counters. He does a good, not great job there but seals run plays well. Look out Andrew Thomas, Will is on your heels to become the first offensive tackle selected in the 2020 NFL Draft.

Diggs is another long player with first-round potential. He shows quick feet and is great when the ball is in the air. The younger brother of Stefon Diggs is not as physical or aggressive in run support. Some coaches will rule him out for that reason alone. As Browns General Manager John Dorsey said last year, cornerbacks are paid to cover. If Diggs’ coverage skills check out, he will fare just fine.

Lewis is a longer looking player and he carries his weight well. There may not be an ounce of fat on him. He is a quick, active pass rusher with a lot of tools that need refined. There is a chance that he slips into the first round but likely destined for Day 2. The Washington D.C. native has recorded six sacks entering this game.

Shea Patterson is not the greatest quarterback, which hampered Collins. Collins is long and lean but he uses his body well. His footwork at the snap gets a little sloppy but his body control downfield is sensational. He high points contested catches routinely. The edge receiver has high upside but probably will not be taken by the end of the first round.

Initially, I was not impressed with Bredeson. The once-heralded five star recruit was blown backward, confused on stunts and dipped his head on blocks. His tape got better in a few other Big Ten games. He was blocking with good leverage, doing a better job of picking up stunts and displayed good lateral quickness. Bredeson has a strong upper body and average athleticism. He may fall into a Day 2 grade after the initial concern.

Ruiz blocks with good leverage and his anchor is pretty firm. His 2019 tape has been more impressive than 2018. There is a chance he could slide into Day 2 of the 2020 NFL Draft.

Peoples-Jones has great athleticism and has been really effective in the past two years. There is more to pull from his game though. His footwork at the snap can improve as well. He can be used in a variety of ways as well from returning punts as a freshman to jet sweeps, screens and more.

A Day 2 selection is likely where he is headed.

Fans will be robbed of the chance to watch potential first-round quarterback Tua Tagovailoa as he is dealing with the devastating injury suffered in November. Potential first-round linebacker Dylan Moses announced that he would return to Alabama next season. Sophomore wide receiver Jaylen Waddle might be the best wide receiver on their roster but he is not eligible until next year. Defensive tackle Raekwon Davis is one of the many others to watch.