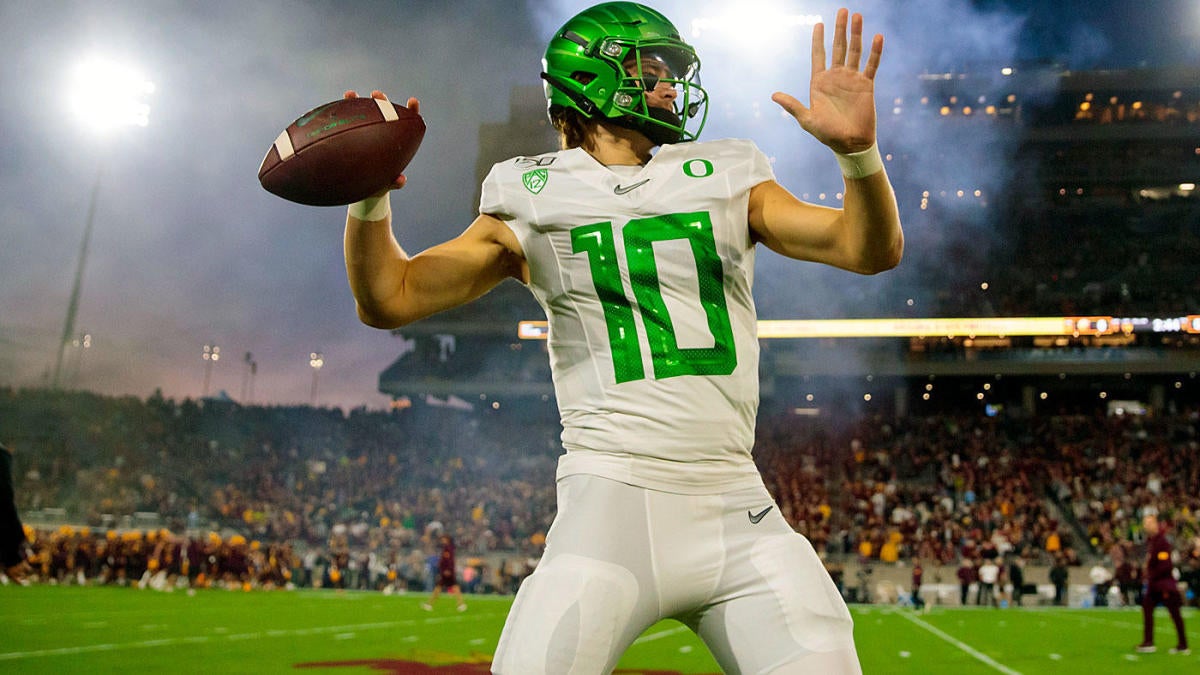 Oregon was so close to competing for the College Football Playoff before being upended by Arizona State. They could come out motivated to make a statement or they could be emotionally disinterested and get destroyed. Both scenarios have played out in the past and it will be determined by their mentality when they take the field. Wisconsin also fell a bit short but head coach Paul Chryst will have his team ready to play. The field will be loaded with 2020 NFL Draft prospects.

CBS Sports has a road map to watching the NFL‘s future stars in the Rose Bowl.

There are several reasons why NFL talent evaluators are drawn to Herbert. He has a big frame and possesses a strong arm. There are flashes of brilliance in his game but inconsistent footwork and mechanics prevents him from putting it all together. To this point, the Oregon native has completed 66.7 percent of his passes but the last three games have been a struggle. A good percentage of his completions have come on swing passes and screens this season. He throws into coverage way too often for comfort and he does not work through his progressions enough. Instead, he forces the football into tight coverage, which will not end well for him in the NFL.

Herbert will likely be taken in the first round because the position is in high demand. Quite frankly, I would not feel confident taking him that early. He needs a lot of work on his mechanics and time to learn. Most organizations either do not have the time to let him sit or the proper coach to develop him.

Dye is a bit of a mixed bag. He is an undersized linebacker capable of playing sideline to sideline, which is coveted in today’s NFL. The senior plays the game at such a high rate of speed and looks comfortable in coverage. The flashes come and go. If Dye is able to put it all together, he could be a really special player. He moves well laterally. The undersized linebackers like Jerome Baker and Bobby Okereke have gone as early as the third round in recent years.

Throckmorton is likely destined for the interior offensive line in the NFL. He is a strong player but does not have the speed to play on the edge. One of the concerns with him moving inside is his lateral quickness. The Washington native can do a better job communicating stunts and exchanges. Otherwise, he moves well laterally. Throckmorton is likely looking at a Day 2 or Day 3 selection.

Breeland snatched six touchdowns out of the air in 2019. His frame is thinner than some of his counterparts at the position but he makes up for that with superior athleticism. The California native is not the best blocker but his body control is elite. Breeland will not fit every scheme but he could be the right fit for a team on Day 2; similar to when the Green Bay Packers took Jace Sternberger in the third round last year.

From a pure talent perspective, Taylor belongs in the first round. His case has been hurt by the devaluation of the running back position and the sheer volume of carries that he has received in college. Since the conclusion of his sophomore season, the New Jersey native has done a tremendous job re-inventing himself as a pass-catching running back. Taylor is agile and does a good job remaining patient before attacking the hole.

Biadasz is one of two centers that warrant being taken in the first round; Oklahoma’s Creed Humphrey being the other. Biadasz is a rock at the heart of the Wisconsin offensive line. He does a good job playing with leverage and sealing run blocks. The Wisconsin native looks for work when he is not engaged; a sign that he is passionate about the game.

Baun reads and react well. He is always active and does a good job using his hands to shed blockers. The Wisconsin native has the versatility to play inside or outside linebacker. After missing the entire 2017 season with a broken foot, Baun has responded well. It might be a stretch if he lands in the first round but there is no hesitancy to take him Day 2.

Oregon has a couple of tremendous players that will not be eligible until the 2021 NFL Draft: offensive tackle Penei Sewell and safety Jevon Holland. Those two players will have their time in the spotlight so today’s focus will be on those eligible for the 2020 NFL Draft. Cornerback Deommodore Lenoir, offensive lineman Jake Hanson and offensive lineman Shane Lemieux are among the other Ducks that should get drafted. They could be heavily represented.

Wisconsin wide receiver Quintez Cephus has shown big play-making ability this season and great body control. It is a deep year for the position so that will ultimately hurt his stock. Count Cephus among the other Badgers that could be drafted.