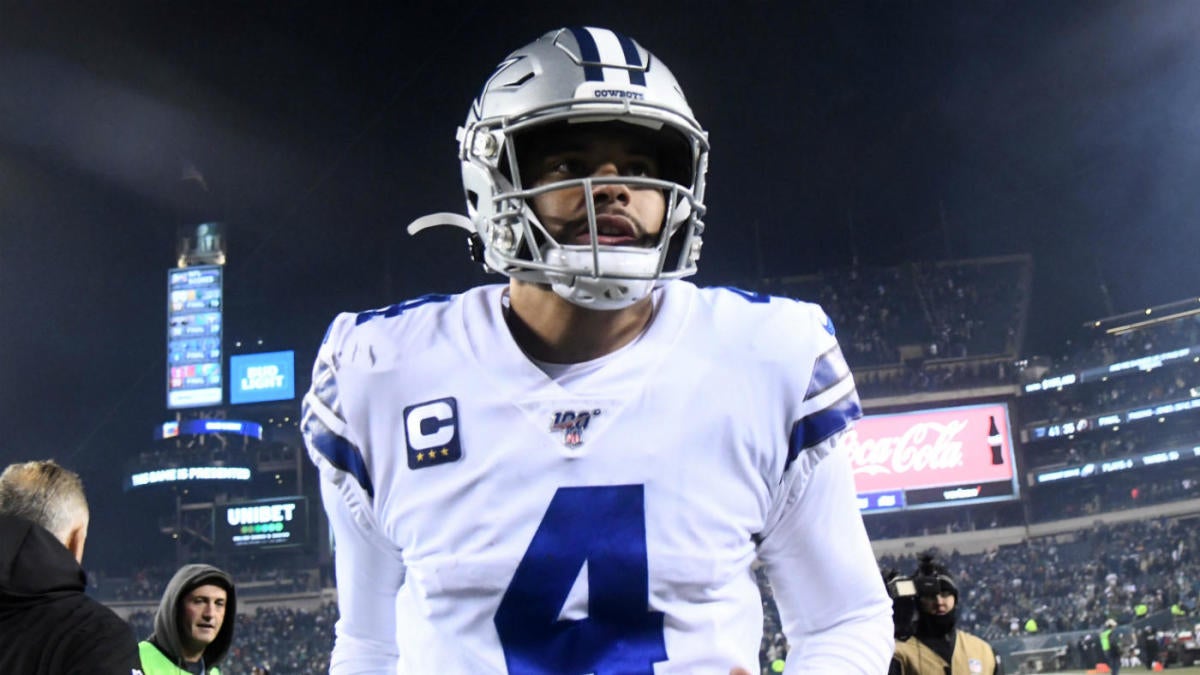 High quality quarterbacks are the rarest of commodities in the NFL. That’s why good starting quarterbacks almost never become unrestricted free agents. Most teams give effective quarterbacks new deals when entering their contract year, if not before.

Negotiations with Cowboys quarterback Dak Prescott haven’t produced a new contract. Prescott via his agent, Todd France, rejected a $30 million per year offer before the regular season started. There has been conflicting information about what Prescott wants financially. A $40 million per year contract demand that surfaced during the preseason contradicted previous reports of Prescott seeking a new deal in the $34 million per year neighborhood. Instead, Prescott made $2.025 million this season playing out his four-year rookie contract.

Prescott did what every player wants to do in his contract year. He responded with a career year. Prescott had his first 4,000 yard passing season. His 4,902 passing yards are second in the NFL. Prescott finished two yards shy of breaking Tony Romo’s single season franchise record for passing yards. He also set a career high with 30 touchdown passes, which are fourth most in the league. A 99.7 passer rating (10th in the NFL) is Prescott’s highest since he was a rookie in 2016.

The ship has probably sailed on getting Prescott to accept a long-term deal for less than the one Rams quarterback Jared Goff signed in early September, since he won the bet he made on himself. Goff’s four year, $134 million contract extension averages $33.5 million per year and is worth as much as $147.95 million because of incentives and salary escalators. The deal contains an NFL record $110,042,682 in guarantees.

Any contract proposals France has previously made are going to be obsolete. France will surely raise his contract demands because of Prescott’s performance this season. That’s a fairly standard practice by any competent agent when a client has his best season with an expiring contract.

Prescott won’t be hitting the open market. Absent a new deal, the Cowboys will be placing a franchise tag on Prescott during the 15 day designation period that runs from Feb. 25 through March 10.

Dallas has two options with the franchise tag. The non-exclusive designation will allow Prescott to negotiate with other NFL teams, but if he signs an offer sheet with another club, Dallas team has five days to match the offer. If the offer is not matched, Dallas will receive two first round picks as compensation from the signing team. Under the exclusive tag, Prescott will be prohibited from soliciting offer sheets from other teams.

The calculations for the cost of the two versions are different. With the non-exclusive designation, the NFL Collective Bargaining Agreement (CBA) mandates a tender at the greater of 120 percent of a player’s prior year’s salary (typically salary cap number) or the sum of the non-exclusive franchise numbers at his position (average of five largest salaries annually) over the last five years divided by the cumulative salary caps for the same period where the resulting percentage is multiplied by the current year’s salary cap (known as Cap Percentage Average). The quarterback number from the Cap Percentage Average projects to $27.067 million if the 2020 salary cap comes in at $200 million.

A player will receive a one year offer from his team that is the average of the top five salaries at his position once the restricted free agent signing period of the current league year has ended (April 17 for 2020) or 120 percent of his prior year’s salary, whichever is greater, under the exclusive franchise tag. The non-exclusive number is initially used as placeholder and adjusted upwards if the exclusive calculation dictates once restricted free agency ends. The 2020 exclusive figure was projecting to $33.229 million before the Falcons restructured Matt Ryan’s contract late last week to create cap room for next year. It is currently projected to be $32.509 million and is subject to further change.

Quarterbacks usually get the exclusive version of the franchise tag. A statement Cowboys owner Jerry Jones made about Prescott during the middle of the 2018 season suggests Dallas will use the more expensive designation. Jones said he wouldn’t consider trading Prescott for two first-round picks even if the top spot in the 2019 NFL draft was included. Prescott has only gotten better since then.

Dallas should be concerned about Prescott deciding to play the franchise tag game like Kirk Cousins did with the Redskins. Cousins embracing the franchise tag during the 2016 and 2017 seasons led to him breaking new ground by getting the NFL’s first lucrative fully guaranteed veteran contract in 2018 free agency. He signed a three-year, $84 million deal (worth a maximum of $90 million through incentives) with the Vikings, which at the time made him the league’s highest-paid player.

Cousins quickly signed his franchise tag in both instances. Most franchise players don’t and try to pressure a team into meeting contract demands by staying away from offseason activities. A designated player can’t participate in offseason workouts anyway without signing a player contract or a participation agreement for the tendered amount protecting him in case of an injury. Franchise players rarely sign participation agreements. It remains to be seen whether Prescott would adopt the same approach as Cousins did for the offseason.

A practical consequence of a franchise tag is increased financial expectations. A second franchise tag in 2021 at a 20 percent increase over Prescott’s 2020 franchise number would be just over $39 million. A third and final franchise tag in 2022 with a 44 percent increase over the 2021 figure would be pretty steep. It would be a little more than $56.175 million. Franchising Prescott twice exclusively could be used by France as ammunition for a long term deal surpassing Seahawks quarterback Russell Wilson as the NFL’s highest paid player. The four-year extension Wilson signed in April averages $35 million per year. The maximum value is $146 million ($36.5 million per year) because of salary escalators.

It wouldn’t be surprising for France to initially insist when negotiations resume that Dallas would also franchise Prescott in 2022 for a third time although it hasn’t happened since the three franchise tag limitation was implemented in the 2006 CBA. The prospect of potentially designating Prescott as a franchise player for three straight years could be justification for France seeking a deal averaging right around $42.5 million per year. Prescott could make in excess of $127.5 million with three franchise tags.

Going year-to-year could be most appealing because of the high salaries and the expected increase in broadcast rights fees with new media deals especially if negotiations become acrimonious. Network executives are reportedly anticipating an increase at least in the 25 to 30 percent range for these deals to give the NFL $8 billion to $10 billion annually. The renegotiations are expected to take place in 2021.

Prescott would earn slightly more than $71.5 million over the two years before likely becoming an unrestricted free agent in 2022 when he is 29. Since Pro Bowl caliber quarterbacks who should still have several highly productive years still ahead of them almost never hit the open market, Prescott could practically name his price by going this route.

The case against paying Prescott

Prescott’s detractors and some Cowboys fans will think it’s ludicrous for Dallas to dramatically re-set the NFL pay scale for him, let alone make him the highest paid player. Before the season began, the Cowboys had Super Bowl aspirations. Dallas will be picking 17th in the 2020 NFL draft after failing to make the playoffs.

Prescott had his worst game of the season against the Eagles in Week 16 when the NFC East title and a playoff berth were on the line. After the Eagles loss, Prescott refused to acknowledge that a sprained AC joint in his right shoulder may have contributed to his lackluster performance.

The Cowboys had a bad record against teams who were above .500 at game time. There was a big difference in how Prescott performed in those games compared to how he did against other teams, as indicated in the chart below.

The discrepancy will be used as further evidence that Prescott is undeserving of top quarterback money.

There probably isn’t a deal that can be made without Dallas accepting the reality of the franchise tag dynamic. Prescott seems more willing than most quarterbacks to exploit leverage.

Once given the franchise tag, there won’t be much incentive for Prescott to quickly sign a long-term deal if that’s his objective. France will likely wait to see whether there’s a resolution with 2018 NFL MVP Patrick Mahomes, who just became eligible to sign an extension with the Chiefs when the regular season ended, before the July 15 deadline for franchise players to sign multi-year contracts. Mahomes is potentially the NFL’s first $40 million per year player. Doing Prescott after a Mahomes contract is in the market place will probably force the Cowboys to beat Wilson’s deal by a considerable margin.

The Cowboys are accustomed to doing lucrative deals where players sign for at least new five years. Prescott is probably pushing for a three or four year deal, so at the latest he would have an expiring contract as a 30 year old and would be better positioned to reap the benefit of the salary cap escalating with the infusion of new TV money. Since the deals Goff, Wentz and Wilson signed this year are four-year extensions, the Cowboys insisting on more new years with Prescott will likely be deal breaker for France.