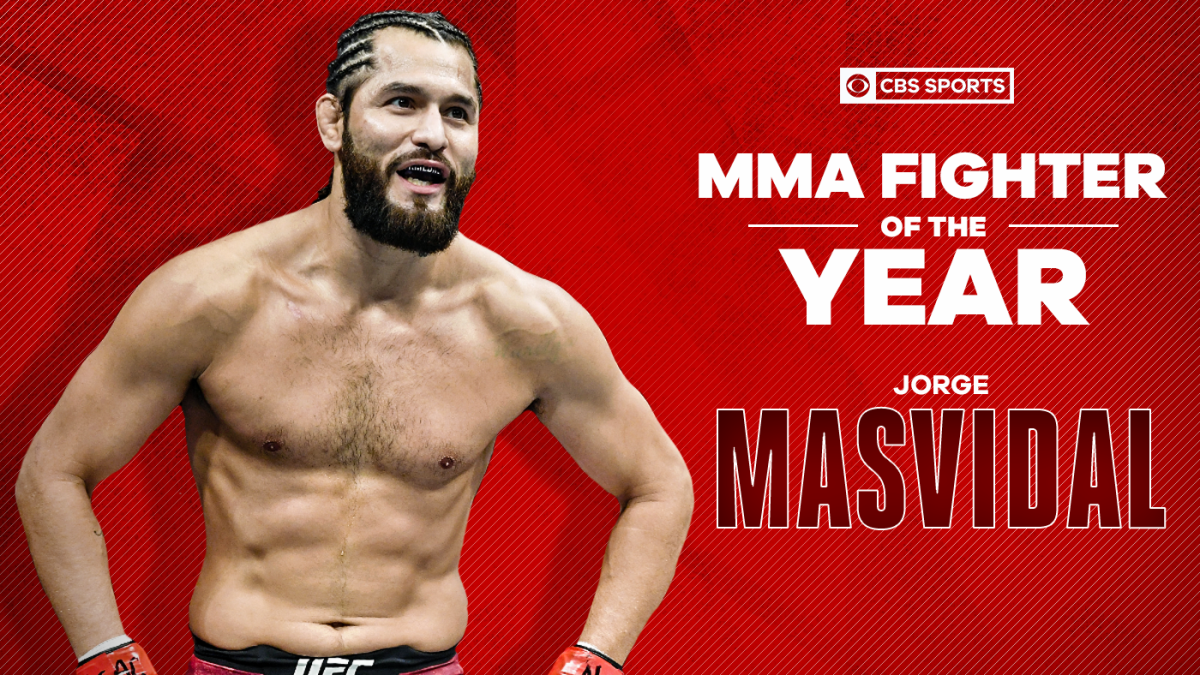 With his title as UFC’s “Baddest Motherf—er” (or BMF) notwithstanding, it has been rare — if not unprecedented — for someone to claim fighter of the year honors without finishing a 12-month campaign as a major champion.

Then again, nothing welterweight Jorge Masvidal has done in 2019 could be deemed remotely typical.

The 35-year-old Masvidal (35-13) rebounded from a 16-month layoff to transform seemingly overnight from journeyman to counter-culture hero thanks to a trio of viral knockouts and a handful of iconic moments along the way. His memorable 2019 was cemented by being named CBS Sports MMA fighter of the year.

Along with capturing the inaugural BMF title by outlasting Nate Diaz in the main event of November’s UFC 244 card, the native of Miami turned his “three piece and a soda” into a household phrase with his backstage fight against Leon Edwards in London, which came just moments after he rallied to knock out Darren Till in March.

Can’t get enough UFC? Subscribe to our podcast State of Combat with Brian Campbell where we break down everything you need to know in the Octagon, including our year-end awards show below.

Soon, the backstory of Masvidal’s incredible transformation began to take shape. During his year-plus absence from the Octagon, Masvidal lived in the woods while filming a Telemundo reality show in the Dominican Republic. Sequestered from social media and everyday life, he vowed to return and “baptize” opponents dramatic fashion.

Yet even Masvidal’s comeback finish of Till couldn’t have teased what would happen next. A memorable promotion filled with trash talk in the lead-up to his UFC 239 bout in July against Ben Askren ended with possibly the most memorable finish in MMA history when Masvidal’s flying knee just five seconds in left his opponent unconscious.

Armed with growing stardom from an adoring fan base, Masvidal incredibly turned that into a headlining role at New York’s Madison Square Garden against Diaz and dressed the part of “Scarface” lead character Tony Montana during the press conference to announce the fight.

Becoming a cult phenomena and a legitimate pay-per-view headliner is one thing. But the fact that his three victories came against such quality opponents is ultimately what made his case so intriguing as Masvidal finished 2019 as both the No. 1 title contender for Kamaru Usman’s UFC welterweight title and a legitimate contender for the top 10 pound-for-pound list.

It wouldn’t be a stretch to suggest that the 12 months and three fights authored by Adesanya (18-0) in 2019 would’ve been the best in class of almost any other calendar year. The 30-year-old native of Nigeria made an incredible leap from contender to UFC middleweight champion and garnered P4P acclaim along the way thanks to decision wins over Anderson Silva and Kelvin Gastelum before a resounding knockout of Robert Whittaker to claim gold. If that wasn’t impressive enough, Adesanya proved his toughness by surviving five rounds of hell with Gastelum in a clear choice for fight of the year from UFC 236 in April.

It’s crazy to think about what else Cejudo might’ve added to his case in 2019 had it not been for a back injury that sidelined him over the final six months. Cejudo (15-2) made a legitimate case for consideration as the best fighter in the world by knocking out former bantamweight champion TJ Dillashaw to defend his 125-pound title before then moving up in weight after Dillashaw vacated his crown and finishing a red-hot Marlon Moraes to become a two-division champion. The 32-year-old Cejudo, who has subsequently vacated his flyweight title, also deserves credit for saving the division with his star power at a time when UFC president Dana White was strongly considering folding it.

A late addition to the conversation thanks to his clinical title win against Max Holloway two weeks ago, Alexander “The Great” finished the year as featherweight champion and a potential rising star. Volkanovski (21-1), who closed 2018 with a knock out of Chad Mendes to send him into retirement, looked great in May when he disarmed and frustrated former champion Jose Aldo by decision at UFC 237. That set the stage for a similar result at UFC 245 when the 31-year-old Australian ended Holloway’s 14-fight winning streak in the division by controlling distance with surgical precision.

If you didn’t know Usman’s name entering 2019, you sure do now after a pair of PPV title wins that catapulted his standing as one of the world’s most dominant fighters. A native of Nigeria, Usman (16-1) extended his UFC win streak to 10 in March when he had his way with Tyron Woodley over five rounds to commandeer the welterweight championship. Nine months later at UFC 245, Usman closed the show by stopping former interim champion Colby Covington in the final minute of Round 5 to end a violent slugfest that showcased his improved striking. The 32-year-old has yet to find an opponent who can slow down his wrestling and may not lose until he does.