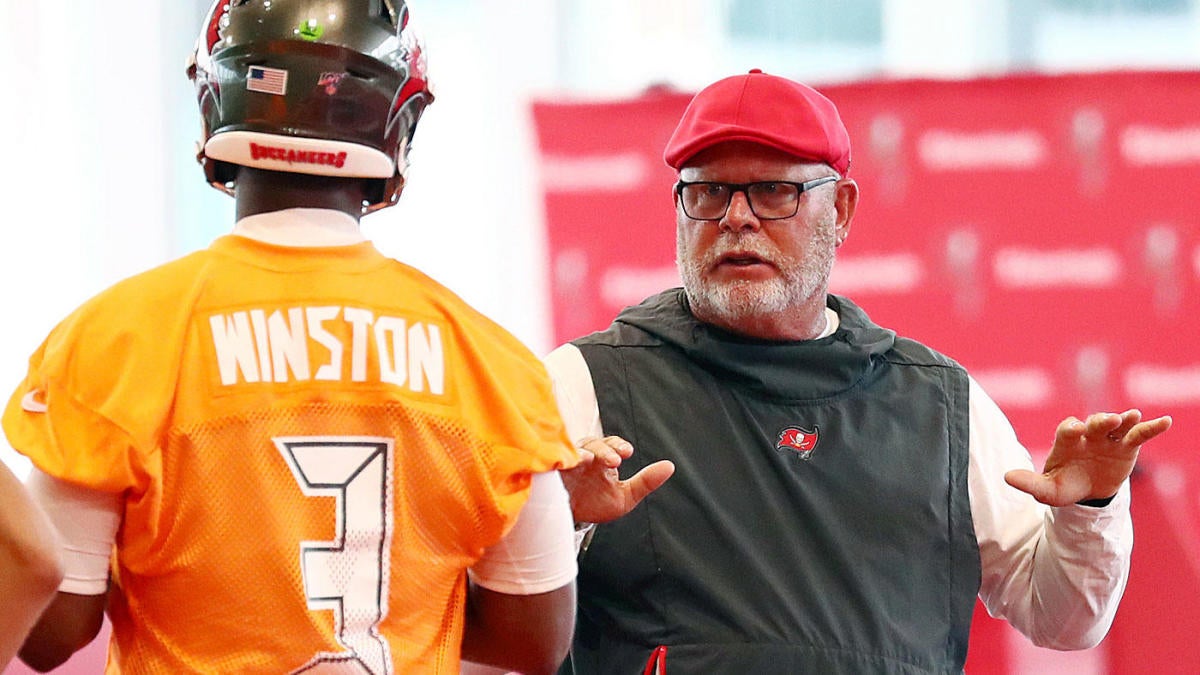 Bruce Arians brands himself as a quarterback whisperer after having worked with Peyton Manning, Ben Roethlisberger, Andrew Luck and Carson Palmer before coming to Tampa Bay in 2019 to help get the most out of Jameis Winston.

While he set career highs with 5,109 yards and 33 touchdowns this season, Winston also threw a league high 30 interceptions as Tampa Bay finished the 2019 season with a 7-9 record. His final interception of the season was a pick-six in the Buccaneers‘ overtime loss to the Falcons this past Sunday. Following Sunday’s loss, Arians offered several candid comments with regard to Winston, who is slated to become a free agent this offseason.

“It doesn’t help, that’s for sure,” Arians said when asked if Winston’s final pick-six hurts his chances at returning next season. “There was a lot of good things, there was a great two-minute drive before the half. There was a lot of things to evaluate, and we’ll take our time in evaluating it.”

On Monday, Arians again fielded questions about Winston and his future with the team. And while Arians and the organization have not made a final decision on Winston, Arians made it clear that he believes the Buccaneers can win with or without Winston.

“(Win) with another quarterback? Oh yeah,” Arians said, via Rick Stroud of the Tampa Bay Times. “If we can win with this one, we can definitely win with another one, too.”

On Sunday, Arians was asked if it’s hard to evaluate a season that saw Winston lead the NFL in passing yards but also in interceptions?

Does he think Winston did enough to bring him back for the 2020 season? Arians, who said Monday that he believes the team will make a decision on Winston “within a few weeks,” said he wouldn’t know the answer until he evaluates Winton’s entire body of work during the 2019 season.

“We’ll just go back and look at the entire season, like we do with everybody, how many (interceptions) were him, how many were somebody else,” Arians said. “But there’s a lot more that goes into it than just interceptions. But it will be a full evaluation, like we do every year.”

Arians didn’t need to look at the film when assessing Winton’s final interception of season. Arians was asked if the pick was the result of a bad decision by his quarterback.

Arians said that what quarterbacks will be available in the draft and in free agency will help determine whether or not the team brings back Winston in 2020. Arians also said he isn’t sure if Winston is “fixable” while adding that that will be one of the things he hopes to find out during his evaluation of the soon-to-be 26-year-old quarterback.

Winston, following Sunday’s season-finale, was asked if it’s hard to enjoy the success he enjoyed in 2019 given his high turnover rate that contributed to Tampa Bay’s losing record.

“It just gives you ambition and desire to get better,” said Winston, whose previous high for interceptions in a season was 18 in the 2016 season. “I know the areas that I have to fix, and I know the areas that I’m highly successful at, but you gotta fix them and you got to find a way to eliminated them.”

Winston was asked if he has a feeling — one way or the other — about his future with the Buccaneers.

“I don’t know,” he said. “I know I’m confident in my abilities. I know I’m going to fix my mistakes, I know that for a fact. But it’s in God’s hand and it’s in their hands.”

Does he want to continue his career in Tampa Bay?

“Absolutely,” Winston replied, “but it’s not my decision.”

Regardless of who is his quarterback next season, Arians is hellbent on his team not beating themselves during his second season in Tampa Bay.

“You’re going home when you lead the league in giveaways,” Arians said. “You’re never gonna play in the playoffs, unless you’re playing for the Steelers in the mid-70s.

“We will not beat ourselves next year.”