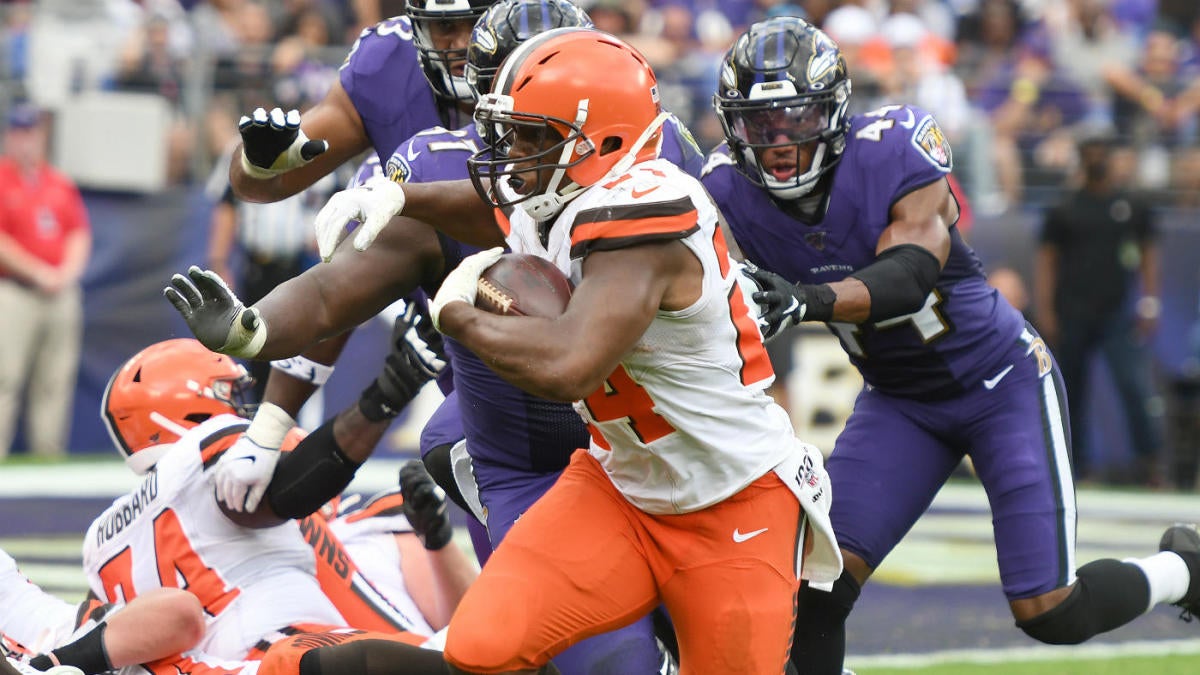 In the NFL, nothing is ever completely certain, with the lone exception of the Patriots being in position to win another Super Bowl. The 2019 regular season proved it again, with more than a handful of outcomes that made us scratch our heads and wonder, how’d that happen? These games were outliers which didn’t seem to fit in with what we saw the rest of the season, although it some cases we didn’t realize it at the time. They not only added to the fun of the NFL‘s centennial season, but also reinforced the notion that anything can happen in the NFL on any given Sunday.

So, before we move on to the final weekend of the regular season, we thought it would be fun to take a look at six of the biggest outliers of 2019 so far.

The final week of the regular season is here, so which teams will cover the spread? Pete Prisco and R.J. White join Will Brinson on the Pick Six Podcast to make picks for every game. Listen below and be sure to subscribe for daily NFL goodness.

Not many people were overly surprised when the Browns went to M&T Bank Stadium in Week 4 and ran through, over and around the Ravens to even their record at 2-2 through four weeks. Cleveland, not Baltimore, was the popular pick to win the AFC North, and the Ravens were coming off a Week 3 loss to the Chiefs that saw them allow 33 point to Patrick Mahomes and Kansas City’s top flight offensive attack.

Three months later, however, it’s hard to fathom the Ravens allowing 40 points to anyone, much less a Browns team that is ranked 22nd in the league in scoring. So, how did the Browns pull this off? Cleveland’s defense forced three turnovers that included two interceptions of MVP front-runner Lamar Jackson, who threw just six interceptions during the entire season. The Browns also received three rushing touchdowns from Nick Chubb, including an 88-yard scoring jaunt that pushed Cleveland’s lead to 30-18 with just under 10 minutes remaining. The Ravens’ defense had also not yet acquired cornerback Marcus Peters, who would quickly helped morph Baltimore’s defense from a slightly above average group to one of the NFL’s premier defensive units.

The Browns’ 40-25 win stands as Cleveland’s most impressive victory in a season that had far fewer wins than many expected. The Ravens, conversely, haven’t lost since that game and have already locked up the No. 1 seed heading into the AFC playoffs.

A week before “seeing ghosts” against the Patriots, Jets quarterback Sam Darnold had the Cowboys seeing stars during New York’s stunning Week 5 win over the Cowboys. Darnold, who had missed the Jets’ previous three games with mono, riddled the Cowboys’ defense to the tune of 338 yards and two touchdowns in a 24-22 win that gave the Jets their first win of the season after an 0-4 start. The Cowboys, who sprinted out to a 3-0 start, fell to 3-3 while offering a glimpse into what their season would ultimately become.

While Le’Veon Bell started the game with a one-yard touchdown run, the Jets’ offensive stars on this day were Darnold and receivers Robbie Anderson and Jamison Crowder. Anderson led both teams with 125 yards that included a 92-yard reception that gave the Jets a 14-3 second quarter lead. Crowder caught six passes for 98 yards that included a 30-yard catch that set up New York’s final points: a 38-yard field goal by Sam Ficken with 3:27 left.

The Cowboys, after falling behind 21-3, fought back to make it a two-point game after quarterback Dak Prescott scored on a four-yard run with 47 seconds remaining. Prescott’s game-tying pass attempt on the two-point try fell flat, however, as the Jets then recovered Dallas’ onside kick to preserve the win.

While the Jets would ultimately fall to 1-7 before righting the ship during the second half of the season (they are now 6-9 entering Sunday’s season-finale against the Bills), the Cowboys are a disappointing 7-8 and need a win over Washington and an Eagles loss to the Giants just to make the playoffs.

In front of a “Sunday Night Football” audience, Indianapolis’ defense, a unit that is currently 15th in the NFL in points allowed, held Mahomes and the rest of the Chiefs’ offense to 18 first downs and 4-12 efficiency on third down. Safety Tyrann Mathieu recorded an interception of Mahomes, while the Chiefs also didn’t help themselves by committing 11 penalties for 124 yards. Kansas City’s offensive ineptitude could also be attributed to the health of Mahomes, who re-aggravated an ankle injury during the first half of the game that would eventually sideline him for two games.

The Colts’ ability to run was a major reason why Indianapolis pulled off one of the bigger upsets of the season. While Kansas City gained just 36 yards on the ground, Indianapolis rushed for 180 yards and a score on 45 carries. Marlon Mack, arguably the Colts’ best offensive player this season, led the way by rushing for 132 yards on 29 carries. And while he wasn’t prolific, quarterback Jacoby Brissett was efficient, going 18-of-29 through the air while scoring the Colts’ only touchdown on a one-yard touchdown.

While his kicking was erratic all season, Adam Vinatieri enjoyed arguably his finest moment of 2019 against the Chiefs, scoring the Colts’ final 12 points while helping Indianapolis head into their bye week with a 3-2 record.

The Chiefs, who did not have receiver Tyreek Hill for the early portions of the season, started slow before winning five straight heading into their season-finale finale against the Chargers. The Colts, who improved to 5-2 before mounting injuries led to six losses over a seven-week span, are hoping to end the season with a .500 record by defeating the Jaguars on Sunday.

No one thought too terribly much — at the time — of Cincinnati nearly pulling off an upset in Seattle against the Seahawks back in Week 1. Seattle was coming off a 10-win season, but not many people expected them to be in the position that they are in now, as the Seahawks are still vying for a possible playoff bye as well as an NFC West division title. And while the Bengals weren’t expected to be good during Zac Taylor’s first season in Cincinnati, no one was predicting the Bengals to win just one game and already lock up the draft’s No. 1 pick entering their Week 17 matchup against Cleveland.

But now, looking back on it, seeing the score “Seattle 21, Cincinnati 20” looks downright bizarre. How in the world did the Bengals almost upset the Seahawks and league MVP contender Russell Wilson? Cincinnati received a stellar performance from receiver John Ross, whose touchdown receptions of 33 and 55 yards helped the Bengals take a 17-14 lead entering the fourth quarter. Ross, who finished the game with seven receptions for 158 yards, would later end up on injured reserve after sustaining a shoulder injury a month into the season.

While Cincinnati made it close, Seattle — in a foreshadowing of what was to come throughout their 2019 regular season — made the key plays down the stretch to pull out a close victory. On the first play of the fourth quarter, the Seahawks took the lead for good on Wilson’s 44-yard touchdown pass to receiver Tyler Lockett. Seattle’s defense, after allowing a Cincinnati field goal on the ensuing drive, would come up with two key stops late in the quarter to preserve the one-point win.

The win helped springboard Seattle to a 10-2 start, while Cincinnati would have to wait 12 more weeks before earning its first win of the 2019 campaign.

The Chargers have spent most of the 2019 season living on the edge. Eleven of their first fourteen games have been decided by seven points or less, with nine of the Chargers’ 10 losses this season coming in games that were decided by a single possession. A year after going 7-1 in such games, the Chargers are 2-9 in games decided by eight points or less. The Chargers’ inability to win close games, along with Philip Rivers throwing an alarming number of interceptions, made Los Angeles a considerable home underdog entering their Week 9 matchup with the red hot Packers.

Led by Rivers (21-of-28 passing with no interceptions), running backs Melvin Gordon (80 yards and two touchdowns on 20 carries) and Austin Ekeler (93 yards on 16 touches), as well as a Los Angeles defense that held Rodgers and the Packers to just 13 first downs, 45 yards rushing and 2-of-10 efficiency on third down, the Chargers pulled off a stunner.

Ultimately, the Chargers’ 26-11 win will go down as the high point in L.A.’s 2019 season. It will go down as one of the uglier moments of the season for the Packers, who have had few other hiccups on their way to a 12-3 record entering Sunday’s game against the Bears.

6. Falcons beat two of NFC’s best teams in their own backyards

After a 1-7 start, Falcons coach Dan Quinn was at the top of most Coaching Hot Seat lists. Few would have guessed what would come next.

Quinn closed ranks heading into Atlanta’s Week 9 bye, making several changes to his coaching staff, and his team has responded by winning five of their last seven games entering Sunday’s season finale against the Buccaneers. Most impressive: Two road wins that came against what could be the NFC’s top two seeds.

While not as shocking, the way Falcons defeated the 49ers in Week 15 was as improbable as their win in New Orleans six weeks earlier. Trailing by nine points midway through the fourth quarter, the Falcons made it a two-point game on Qadree Ollison’s one-yard touchdown run with 5:20 left. Down by five points with just seconds remaining, Ryan’s five-yard touchdown pass to Julio Jones capped off the Falcons’ improbable, come-from-behind victory.

Will we have more improbable moments this postseason? Only time will tell.