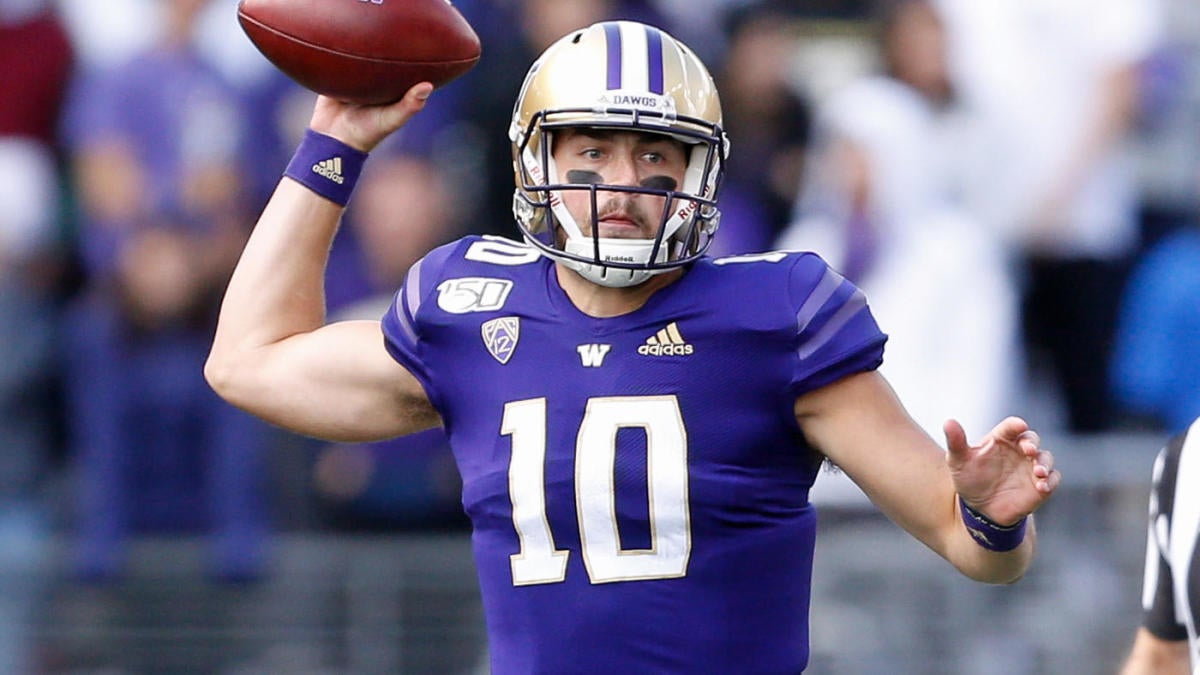 The Huskies passer finished the season completing 64.2 percent of his throws for 3,132 yards, with 23 touchdowns and eight interceptions. It was his only season in Washington and he arrived on campus having played in just 13 games and attempted 370 passes during his freshman season at Georgia in 2016. Prior to this season, Eason threw seven passes, all in 2017, because he was benched for Jake Fromm.

That prompted him to transfer to Washington before 2018. At 6-foot-5 and 230 pounds, he certainly looks the part, and he has the arm strength to make every throw look easy. But the biggest question for much of the fall was whether he would be NFL-ready after this season.

First things first, Eason passes the eyeball test with flying colors. He looks like a franchise quarterback, and he’ll undoubtedly draw comparisons to Carson Palmer and Matthew Stafford in the coming months. In related news, he can throw the ball out of the stadium. And while he hasn’t played a lot of football in recent years, you wouldn’t have known it to watch him against Eastern Washington in the Huskies season opener.

That became a recurring theme throughout 2019: Eason’s accuracy on short and intermediate passes was among the best in the country. We’ll just refer you this touchdown pass Eason made against BYU:

And Eason was the best quarterback on the field when the Huskies hosted Justin Herbert and the Oregon Ducks on Oct. 19. Both players looked the part of franchise NFL quarterbacks and they possess two of the strongest arms in college football. Eason finished 23 of 30 for 289 yards, 3 touchdowns, and no turnovers, and those numbers would’ve been even better if he hadn’t been victimized by several drops.

Unlike Herbert in the matchup, Eason looked much more comfortable in the pocket, getting the ball out on time and accurately. This back-shoulder throw that set up a touchdown pass a play later to give Washington a 21-14 halftime lead:

Several weeks later against Utah, Eason got off to a fast start, picking apart one of the nation’s best defenses. He was decisive, got the ball out quickly and with pace, hitting his receiver in the hands. And more importantly, putting them in position for MAX YAC. (We don’t know if people say this already or not but we’re claiming it as our own until proven otherwise; MAX YAC = maximizes yards after catch because of well-placed throws that best allow the receiver to run once the ball is in his hands.)

The Utes’ defense regrouped at halftime, Eason was forced to get rid of the ball earlier than he wanted to, and the mistakes mounted. He had his first truly bad interceptions of the season (here’s the first):

If nothing else, this reconfirmed what we already knew: Eason is wildly talented but he also hasn’t played a lot of football in the last 24 months. He outplayed Herbert but he was thoroughly flummoxed in the final 40 minutes against Utah. It didn’t help that his receivers struggled to hold onto the ball but Eason did himself few favors with poor decisions.

He had 10 touchdowns and two interceptions through the first four games. In the 11 games since, he has 13 touchdowns and six interceptions. Over the first eight games, only once did Eason complete fewer than 60 percent of his throws and on four occasions he had a completion percentage north of 70. In his last five games he twice completed fewer than 60 percent of his passes and didn’t eclipse the 70 percent mark once.

But Eason ended his college career on a high note, helping the Huskies to a Las Vegas Bowl victory over Boise State. He finished 22 of 32 for 210 yards with a touchdown and no interceptions, and Washington cruised to a 38-7 win.

The good: Eason is one of the most accurate short and intermediate passers and he excels at throwing slants. Not only is he accurate, but he puts the ball in a position where his receiver can maximize yards after the catch. It’s something we saw from him just about every week during the 2019 campaign.

The bad: Things start to break down when Eason is pressured. We saw this against Utah, where Washington dominated the first half and imploded in the second half. We saw it three weeks later against Colorado, where the Buffs spent much of the game in the backfield, harassing Eason, and forcing him into bad decisions. Eason can also lack touch on deep throws even though his arm strength rivals Herbert’s. And unlike Love, who can drop a 50-yard bomb into a bucket, Eason struggles with touch on these types of passes, either allowing the underneath defender to make a play on the ball or overthrowing everyone on the field.

Over the final month of the regular season, we thought it might be in Eason’s best interest to return to school. Clearly he feels differently, and there will be no shortage of suitors should his predraft workouts impress NFL evaluators desperately looking for quarterbacks.