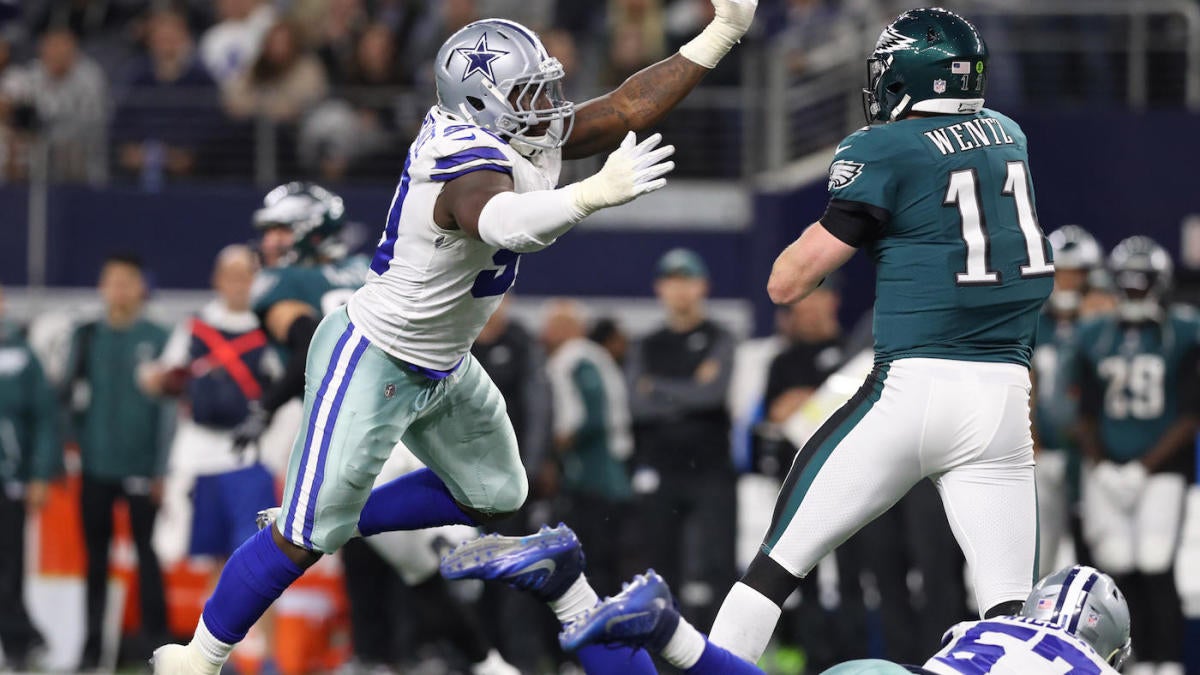 Welcome to Week 16 of the 2019 NFL season! We’ve got another packed slate for you all this week, complete with several marquee games.

This week marks the beginning of the NFL‘s Saturday schedule, with a trio of games that all have the potential to impact the playoff picture. The effects on the postseason don’t stop there, as Sunday features the de facto NFC East title game as well as several other battles that will determine seeding in each conference. And on Monday night, we’ve got an anticipated NFC North battle between two teams who are still in contention for a first-round bye.

Let’s get right into it.

Teams that have clinched a playoff spot and/or division title are denoted with ^ symbol.

Teams that have been eliminated from playoff contention are denoted with an asterisk.

A pair of division matchups here, with each having the potential to dramatically affect playoff seeding. If New England beats Buffalo, the Patriots clinch the division and the Bills are locked into the No. 5 seed in the AFC. If the Bills win, however, things have the potential to get interesting in Week 17. The same is true of the NFC North showdown. If the Packers win, they clinched the NFC North and the Vikings find themselves relegated to the No. 6 seed at best, but even that would be in danger if the Rams beat the 49ers a couple of days earlier. If Minnesota wins, whatever happens in Week 17 would decide the NFC North.

Week 14 also features three games where both teams are within one game of a playoff spot, including the de facto NFC East title game.

Saturday night marks LA’s last chance to keep its playoff hopes alive. The Rams need to go 2-0 against the 49ers and Cardinals and see the Vikings go 0-2 against the Packers and Bears in order to have a shot. San Francisco dropped to the No. 5 seed but still remains alive for both the NFC West title and the No. 1 overall seed in the NFC. The Saints are also in the mix for the No. 1 seed, and they travel to Tennessee to take on the Titans, whose hopes for a playoff spot rest on either the Texans or Steelers going 0-2, in addition to their likely needing to beat both the Saints and the Texans themselves. And on Sunday afternoon, the Cowboys and Eagles play for the NFC East title and the right to (probably) get blown out by whichever of the Seahawks, Packers, Saints, 49ers, or Vikings is unlucky enough to drop to the No. 5 seed.

These two teams are actually set up pretty similarly on offense, with quarterbacks who love to throw downfield to a pair of star receivers. The Buccaneers have completed 32 passes of at least 20 air yards this season, per Sports Info Solutions, tied for most in the league. The Texans have completed 28 such passes, fifth-most in the NFL. Of course, Jameis Winston will not have Mike Evans or Chris Godwin for this game, while the Texans will have each of Deshaun Watson, DeAndre Hopkins, and Will Fuller all on the field.

It’s not just possible but highly likely that the two best cornerbacks in the NFL are playing in this game. First, there’s former Bills corner and now Patriots corner Stephon Gilmore, who is a front-runner for defensive player of the year. Among the 137 cornerbacks who have played at least 100 snaps in coverage this season, Gilmore’s 32.8 passer rating allowed on throws in his direction ranks second. Right behind him at No. 3? That’d be current Bills corner Tre’Davious White, with a 43.9 rating.

Jared Goff completely collapses under pressure. His passer rating of 58.2 is 39.5 points worse than his rating in a clean pocket, per Pro Football Focus. Luckily for the Rams, the 49ers don’t get a ton of pressure on opposing quarterbacks. Wait. Nope. Scratch that. The 49ers get pressure on 28.5 percent of opponent dropbacks, per Pro-Football-Reference, the fourth-highest mark in the league. The Niners get that pressure despite blitzing less often than all but three other teams, which helps them keep seven or even eight players in coverage on every snap, narrowing passing lanes for opposing QBs.

The difference between the Steelers and Jets this season, in terms of their record? Pittsburgh’s defense has been able to keep enough games, close enough for them to actually win. Both of these teams have only two double-digit wins, but while the Steelers are 6-4 in one-score games, the Jets are only 3-2.

An excerpt from our Drew Brees-Michael Thomas story from earlier this week:

Kyle Allen in his last stretch before being benched: 134 of 214 (62.6 percent) for 1,429 yards (6.7 per attempt), seven touchdowns, and 10 interceptions. Jacoby Brissett in his most recent similar stretch: 138 of 228 (60.5 percent) for 1,599 yards (7.0 per attempt), eight touchdowns, and eight interceptions. Brissett’s been playing injured and largely without T.Y. Hilton, but we should not be surprised if the Colts bring in another quarterback this offseason.

At the moment, the Bengals own the No. 1 pick in the 2020 NFL Draft. The Dolphins, meanwhile, own the No. 3, 22, and 22 picks, thanks to their trades with the Steelers (Minkah Fitzpatrick) and Texans (Laremy Tunsil). If you look at the old school Jimmy Johnson-style trade value chart, the Bengals (3,000 points) are getting quite a bit less value here than the Dolphins (3,740 points). On the newer-school AV-based chart at Football Perspective, the difference is even starker: 34.6 points for Cincinnati and 57.1 points for Miami.

Since trading for Marcus Peters prior to their Week 7 game, the Ravens’ secondary has taken a step forward. During that time, according to Pro Football Focus, the Ravens have the Nos. 4 (Peters), 39 (Marlon Humphrey), 51 (Jimmy Smith), and 74 (Brandon Carr) ranked cornerbacks in coverage, among 187 players who have been on the field for at least 100 coverage snaps. That’s pretty damn impressive. Best of luck to Baker Mayfield and company on Sunday.

The quarterback position has been the big story for the Jaguars this season, but just as important in their lack of success has been the step backward the defense has taken over the past two years. Jacksonville had what was likely the NFL’s best defense in 2017, ranking second in both yards and points allowed, and first in Football Outsiders’ defensive DVOA. This season, the Jags rank 23rd in points, 24th in yards, and 29th in DVOA. Yikes.

Neither one of these guys has been all that spectacular, but it’s clear Jones has been better. He’s also had considerably more help, even with many of his weapons in and out of the lineup for much of the season.

The Broncos are only 5-9 this season, but new coach Vic Fangio has largely done what he was brought in to do: improve the team’s defense. Despite playing without Bradley Chubb for much of the year, Denver has improved in yards (22nd to 13th) and points allowed (13th to 10th), while maintaining a defensive DVOA in the top third of the league. The Broncos are still short on talent on offense, but if they play well on defense again next season, they could take a step forward.

Last week was likely the Raiders’ last game in Oakland. This week will almost surely not be their last game in LA, but being that the Raiders themselves used to play there, here’s some stats on how they’ve fared in Los Angeles. At the Coliseum, they went 65-38, good for a 0.631 winning percentage. They went 2-2 at Anaheim Stadium and never played in the Rose Bowl. They’re 0-2 against the Chargers at the StubHub Center.

Last week against the Browns, Kenyan Drake went off for 137 yards and four touchdown on the ground. In his entire career prior to that game, Drake had just five rushing touchdowns and three 100-yard games. The game raised his career average yards per carry from 4.55 to 4.64, a pretty impressive step forward.

This will be the eighth Cowboys vs. Eagles game the teams have played during the careers of Dak Prescott and Carson Wentz. (Wentz has missed one of the previous seven due to injury while Prescott played only two drives in one of the games.) Prescott is 5-1 in six full games against Philadelphia, completing 143 of 217 passes (65.9 percent) for 1,575 yards (7.3 per attempt), seven touchdowns, seven interceptions, an 84.9 passer rating, and three rushing scores. In his six games, Wentz has a 2-4 record and is 143 of 215 (66.5 percent) for 1,394 yards (6.5 per attempt), 11 touchdowns, two interceptions, and a 97.7 passer rating.

Andy Reid has coached 11 games (including playoffs) against his former assistant coaches. In those games, Brad Childress, Steve Spagnuolo, Ron Rivera, Pat Shurmur, Todd Bowles, Doug Pederson, and Sean McDermott, are 4-7 with a minus-38 point differential, meaning Reid has tended to win those games by just about a field goal. Let’s see how Matt Nagy can do in that situation on Sunday night.

Which of these quarterbacks do you think made the Pro Bowl this season?

I’m sure you already know that A is Aaron Rodgers and B is Kirk Cousins and the Rodgers made the Pro Bowl while Cousins did not.