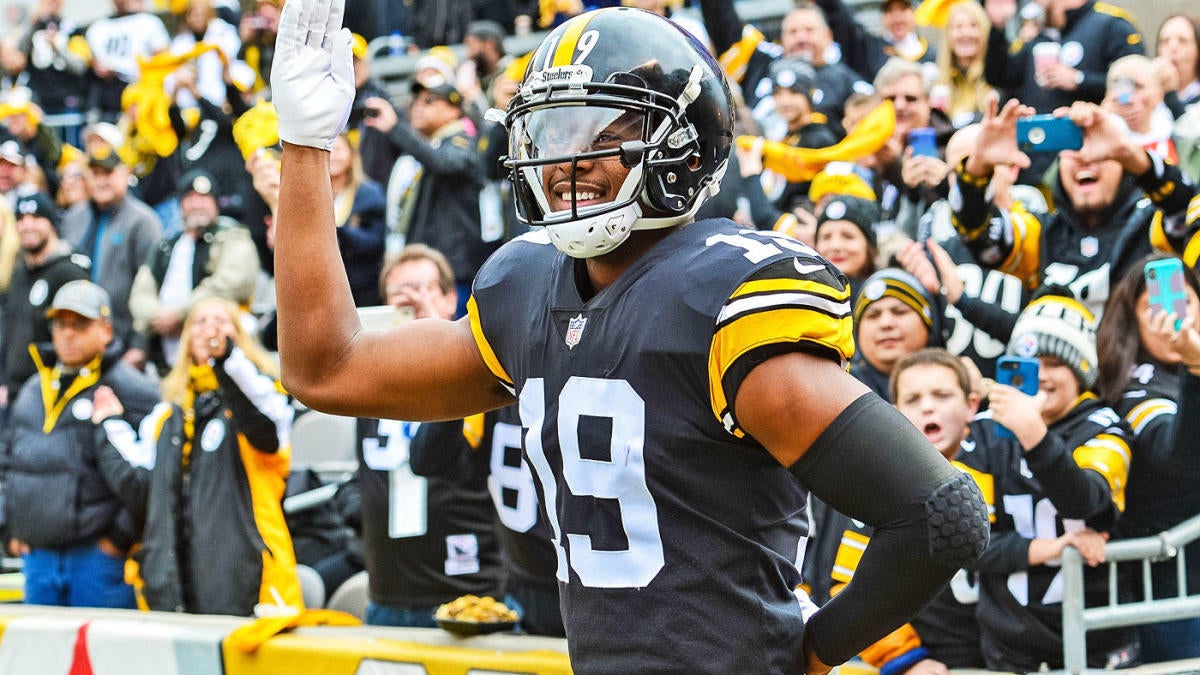 A full weekend of NFL football? Yes, please. As we head into the holiday weekend, we have not one, but three straight days of action on deck, with three games set for Saturday along with the traditional Sunday and Monday contests.

Naturally, injuries are a main storyline for clubs vying to make the playoffs and fans, who are still fighting for a fantasy football championship. In Week 16, there are a number of names we’re keeping an eye on, including the potential return of Steelers receiver JuJu Smith-Schuster along with Patriots pass catcher Julian Edelman and Bucs quarterback Jameis Winston.

To find out more on all those players, here’s our complete rundown of the most newsworthy names on this week’s final injury report, which we’ll update leading into Week 16:

Houston saw star receiver DeAndre Hopkins return to practice fully on Thursday after missing Wednesday’s session due to an illness. That illness doesn’t appear to be impacting his status for Saturday’s tilt with the Bucs as he doesn’t carry a designation heading into the weekend.

The Bucs had already ruled receiver Chris Godwin out earlier in the week as his hamstring injury could keep him out for the remainder of the regular season. With Godwin sidelined and fellow receiver Mike Evans on IR, Tampa will be limited in the passing game. Not only are their pass catchers taking a hit, but quarterback Jameis Winston is dealing with a few injuries of his own. While officially listed as questionable, Winston did practice fully on Thursday.

Buffalo has been without offensive tackle Ty Nsekhe since Week 11 and he didn’t make any steps towards a return this week, so it’s no surprise he’s been ruled out. Outside of that, the Bills are generally pretty healthy heading into this Saturday afternoon matchup.

Patriots receiver Julian Edelman is listed as questionable with a knee and shoulder injury, but he is expected to play on Saturday, according to Ian Rapoport of the NFL Network. Linebacker Jamie Collins is worth monitoring as this game draws closer after the veteran popped up on the injury report on Wednesday and was limited for the rest of the week.

Despite dealing with a right thumb injury, quarterback Jared Goff was able to practice fully this week and carries no injury designation heading into Los Angeles’ Saturday night matchup with San Francisco. As for corner Troy Hill he had a procedure done on his thumb and the team is electing to hold him out this week. Darious Williams is expected to start in his place. Meanwhile, kicker Greg Zuerlein is questionable with a quad injury. Head coach Sean McVay noted that the team will test out that leg prior to their contest and make the necessary roster moves if need be. Tight end Gerald Everett is poised to make his return after missing the previous three games due to a knee injury.

The good news for the 49ers is that star cornerback Richard Sherman (hamstring) carries no injury designation heading into the weekend and was a full participant in practice all week. They will, however, be without pass rusher Dee Ford, who is still dealing with a hamstring injury.

Despite Chark being listed as questionable, Jaguars head coach Doug Marrone said that he expects the receiver to play on Sunday after missing Week 15 due to that ankle injury.

Atlanta moved guard James Carpenter to injured reserve on Friday, ending his season. He was the only Falcons player with an injury designation for this week. Receiver Julio Jones was limited in practice all week, but is not listed with a game status for this game, clearing the way for him to play.

Tennessee will be without Humphries after he did not practice all week. Jackson will also be sidelined after sitting out of Thursday and Friday’s practices due to his foot injury. As for Simmons, head coach Mike Vrabel noted that he was held out simply as a rest day. Receiver Corey Davis was not listed on the final injury report after being limited this week due to an ankle injury. Running back Derrick Henry (hamstring) is also good to go for Sunday.

The big news out of New York is that the Giants have announced that rookie Daniel Jones will return as the starter in Week 16 after missing the previous two games due to a high ankle sprain. Outside of Ellison, the Giants have no one else listed on the injury report heading into Week 16.

Dwayne Haskins Jr. (ankle) was a full participant all week in practice and has no injury designation. Running back Adrian Peterson also has no designation. He practiced fully on Friday after missing Thursday’s session due to a toe injury.

Pittsburgh is completely healthy heading into Week 16, listing zero players on the final injury report of the week. Wide receiver JuJu Smith-Schuster has missed the previous four games, but has practiced fully the previous two days. He has admitted he’s not 100%, but “I am going to see what I can do.” Given that he’s admitting he’s not fully healthy, that may suggest he’ll be limited if he does play on Sunday. Tight end Vance McDonald has also cleared concussion protocol and is expected to play.

Unlike the Steelers, the Jets have a number of players listed on their final injury report. Receiver Robby Anderson was able to return to practice on a limited basis on Friday after sitting out of Thursday’s action due to his illness. Both Compton and Thomas did not practice all week, so they are both trending in the direction of being ruled out. Meanwhile, Jamal Adams and Quinnen Williams are both slated to make their return to the lineup.

Running back Joe Mixon (calf) was not listed on the final injury report as Cincinnati gears up to travel to Miami. Unsurprisingly, receiver A.J. Green continues to be sidelined and will likely not play for the rest of the season. With Miller out, Billy Price will likely make his first start at right guard after making seven at left guard.

After being a limited participant in practice on Wednesday, receivers DeVante Parker (hip) and Albert Wilson (hip) were both able to practice fully on Thursday and Friday and carry no injury designation for Week 16. Meanwhile, interior offensive lineman Evan Boehm and defensive end Taco Charlton both popped up on the injury report on Friday and were limited in practice.

Curtis Samuel first appeared on the injury report on Thursday after being a limited participant in practice. He didn’t do anything on Friday, which would suggest that he’ll truly be a game-time decision on Sunday. As for Shaq Thompson, he didn’t practice all week after suffering an ankle injury last week against Seattle, so it was no surprise to see Carolina rule him out.

Kenny Moore II will continue to be sidelined with that ankle injury he suffered back in Week 13 against the Titans. Meanwhile, Autry and Wilson are both dealing with injuries they suffered in Monday’s loss to the Saints and won’t be able to go.

Both Stanley and Board were full participants in practice all week and just need to clear concussion protocol before being able to suit up on Sunday in Cleveland. Running back Mark Ingram and safety Earl Thomas III were both taken off the injury report.

Starting center JC Tretter was limited on Friday and has missed a number of practices the past few weeks due to his knee injury, but he has yet to miss a snap this season. Given that, it’s hard to imagine he’ll be held out this week. Head coach Freddie Kitchens also noted that he wasn’t concerned about Richardson, who missed Wednesday and Thursday and was limited on Friday.

Detroit will be without starting right tackle Rick Wagner for the second straight week due to his knee injury. They’ll also be without two more starters in Robinson and Jones. As it relates to Kennard and Scarbrough, they both were limited in practice on Friday, giving themselves a chance to suit up this weekend. Running back Kerryon Johnson is also hoping to be activated off of injured reserve prior to this matchup as well.

The flu is reportedly making its way through the Broncos locker room and has led to a number of players appearing on the injury report all week. Quarterback Drew Lock popped up on it Friday because of an illness, but he was a full participant in practice and carries no designation heading into Sunday.

After not practicing all week, rookie running back Josh Jacobs will not play on Sunday due to his lingering shoulder injury. That will thrust DeAndre Washington into the starting spot. Rookie receiver Hunter Renfrow (rib) looks poised to return into the rotation after sitting out since Week 12. He was listed as a full participant on Friday.

Los Angeles is at risk of missing tackle Russell Okung, who did not practice all week. Justin Jackson was limited all week in practice and is questionable to suit up because of a hamstring injury.

Despite being limited all week in practice, the Cowboys have taken quarterback Dak Prescott off the final injury report, putting him in line to start on Sunday in Philadelphia. Linebacker Sean Lee did not practice on Friday, but the team notes it is not injury related.

The Eagles made it official by ruling starting right tackle Lane Johnson out for Sunday’s pivotal showdown with the Cowboys. Philly also saw Avonte Maddox appear on the injury report of Friday due to a knee issue. Derek Barnett is listed as questionable after being limited in practice on Friday, the first time he’s had significant reps since suffering his ankle injury.

Cardinals head coach Kliff Kingsbury noted that both guard Justin Pugh and receiver Christian Kirk are going to be true game-time decisions of whether or not they play against the Seahawks. Kirk was a limited participant both Thursday and Friday after missing Wednesday’s practice due to the injury.

It looks like Seattle will be without starting corner Quandre Diggs after suffering an ankle injury. Clowney is poised to miss his second straight game due to his core injury.

Despite being limited in practice all week, Kansas City elected to hold out Morris Claiborne out of this week’s matchup with Chicago. Damien Williams was a full participant in Friday’s practice after being limited all week and carries no designation heading into Sunday.

Akiem Hicks did pop up on the Friday injury report with an elbow injury and is officially ruled as questionable for Sunday. He did seem to bang up his elbow in Sunday’s loss to the Packers and was on IR for most of the year because of it too. That said, given that he was a full participant on Friday would suggest that he’ll be ready to suit up. Meanwhile, Prince Amukamara was added to report on Thursday due to that hamstring injury.