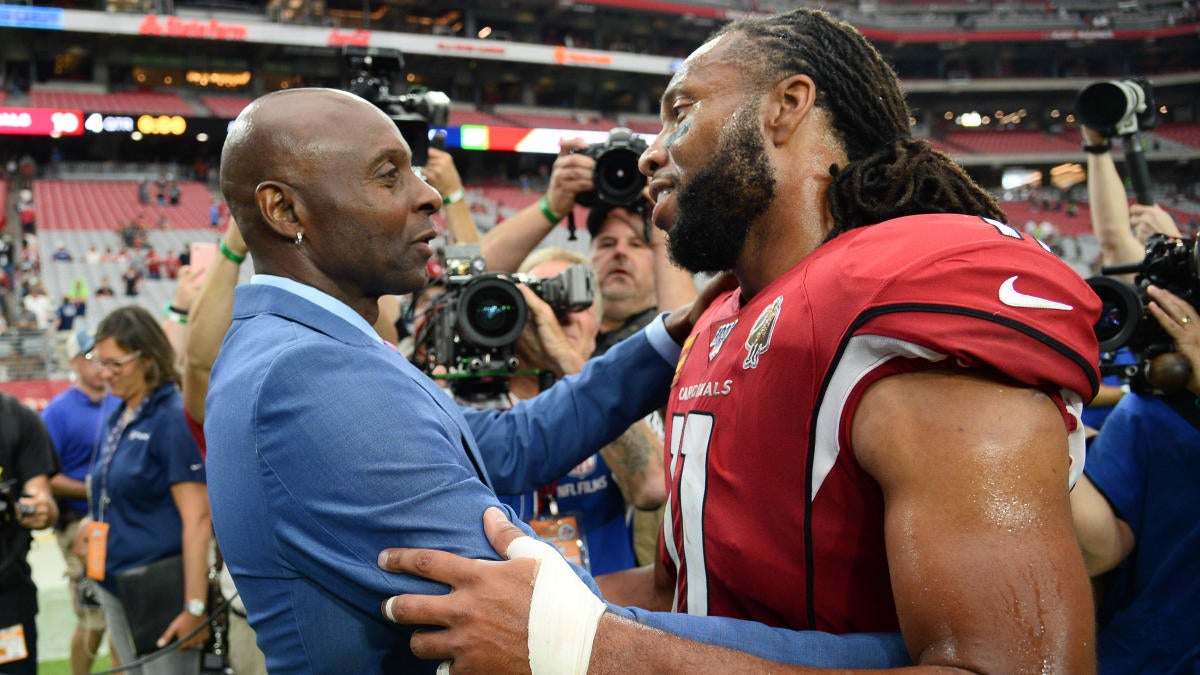 Jerry Rice may be considered the greatest receiver in NFL history, but he was not the first wideout named to the NFL100, the league’s new All-Time Team in celebration of the league’s 100th anniversary. That honor belonged to Randy Moss, whose included to the league’s All-Time team prior to the unveiling of the rest of the receivers that made the team during Friday’s NFL Network program.

Rice, as expected, was named to the team, as he is No. 1 all-time with 1,549 career receptions for 22,895 yards and 197 touchdowns. A 13-time Pro Bowler, 10-time All-Pro and two-time NFL Offensive Player of the Year, Rice also earned Super Bowl XXIII MVP honors, posting then-records with 11 receptions for 215 yards in the 49ers‘ 20-16 victory over the Bengals. Rice won three Super Bowls with the 49ers and holds Super Bowl records for career receptions (33), yards (589) and touchdowns (eight).

Moss, nicknamed “The Freak” after terrorizing NFL defenses for well over a decade, is second all-time with 156 career receiving touchdowns and fourth all-time with 15,292 receiving yards. Moss, a six-time Pro Bowler and four-time All-Pro during his 13-year career, led the NFL in touchdown receptions on five different occasions. His 17 touchdowns receptions in 1998 is still the most by a rookie in NFL history, while his 23 touchdown catches in 2007 is still the record for most touchdown catches by a player in a single season.

Here’s a look a the other eight receivers that cracked the NFL’s All-Time Team.

Larry Fitzgerald: One of the most humble stars in NFL history, Fitzgerald — the only active receiver to make the team — has let his play do the talking throughout his brilliant 16-year career. An 11-time Pro Bowler, Through 14 games in the 2019 seasons, Fitzgerald is second all-time with 1,370 receptions for 16,990 yards and is also sixth all-time with 119 touchdown receptions. Fitzgerald, who has led the NFL in receptions and receiving touchdowns on two different occasions, has one of the greatest postseason tears in NFL history. In the 2008 playoffs, Fitzgerald caught 30 passes for 546 yards and seven touchdowns in four games while helping lead the Cardinals to their first-ever Super Bowl appearance.

Raymond Berry: Johnny Unitas’ favorite target, Berry, a six-time Pro Bowler and three-time All-Pro, led the NFL in receptions each year from 1958-60 while helping the Colts with consecutive NFL championships in 1958 and ’59. He also led the NFL in receiving yards three times and in touchdown receptions on two different occasions. He is most remembered for his epic performance in the 1958 NFL Championship Game. In the first overtime game in NFL history, Berry’s 12-catch, 178-yard, one-touchdown performance helped the Colts defeat the mighty Giants in New York, 23-17.

Lance Alworth: Pro Football’s greatest receiver during the 1960s, Alworth earned All-Pro honors each season from 1963-68. He was named an AFL All-Star seven times while leading the American Football League in receptions three times. Alworth, who won an AFL title with the Chargers in in 1963, helped the Cowboys win their first Super Bowl in 1971, catching a touchdown pass in Dallas’ 24-3 win over Miami in Super Bowl VI. In 11 seasons, Alworth, nicknamed “Bambi” during his playing days, retired with 10,266 receiving yards and 85 touchdowns while averaging a whopping 18.9 yards per reception.

Paul Warfield: An eight-time Pro Bowler, Warfield, arguably the most complete receiver of his time, helped lead the Browns to their most recent NFL title during his rookie season in 1965. After earning three of his Pro Bowl selections in Cleveland, Warfield was named to the Pro Bowl in each of his first five seasons in Miami while helping the Dolphins win three AFC championships and back-to-back Super Bowl titles. He was the Dolphins’ leading receiver during Miami’s perfect season of 1972.

Marvin Harrison: An eight-time Pro Bowler and three-time All-Pro, Harrison teamed up with Peyton Manning to form arguably the greatest QB-WR duo in NFL history. A Pro Bowler each season from 1999-06, Harrison is fifth all-time with 1,102 receptions, sixth all-time with 119 touchdown receptions, and ninth all-time with 14,580 receiving yards. Harrison, who holds the NFL single-season record with 143 receptions during the 2002 season, helped the Colts capture a Super Bowl title in 2006.

Elroy Hirsch: Nicknamed “Crazy Legs” for his speed and keen ability to evade defenders, Hirsch was named to the NFL’s All-Decade Team during the 1950s. Hirsch, who was converted from a running back to a receiver after joining the Rams in 1950 (his fifth season in pro football), helped lead Los Angeles to an NFL title in 1950. His best season was in 1951, when he led the NFL with 66 receptions for 1,495 yards and 17 touchdowns while averaging 22.7 yards per reception.

Steve Largent: The Seattle Seahawks‘ first great player, Largent — a member of Seattle’s expansion team in 1976 — earned seven Pro Bowl selections during his 14 seasons in Seattle. Largent, who twice led the NFL in receiving yards, retired with 819 receptions for 13,089 yards and 100 touchdowns while averaging 16 yards per catch. His play helped the Seahawks rise from obscurity to relevancy in the 1980s. After missing the playoffs during their first seven years of existence, the Seahawks made the playoffs four times in the ’80s that included a trip to the 1983 AFC Championship Game.

Don Shula, the only coach in the Super Bowl era history to lead a team to a perfect record, and Bill Walsh, a three-time champion and innovator of the West Coast Offense, were also named to the All-Time Team on Friday night, joining Bill Belichick, Paul Brown, Joe Gibbs, George Halas, Curly Lambeau, Tom Landry, Vince Lombardi, and Chuck Noll.

Notable snubs from Friday night include Terrell Owens and Cris Carter. One of the most physically gifted receivers in NFL history, Owens was a six-time Pro Bowler and five-time All-Pro during his 15-year career. Owens was an All-Pro for the 49ers, Eagles and Cowboys, and he is third in NFL history with 15,934 yards and 153 touchdowns. He is also eighth all-time with 1,078 career receptions. Owens’ playing career most remembered for two things: his game-winning catch in the 1998 NFC wild card round, his prolific performance in Super Bowl XXXIX despite playing on just one good leg. His notable “antics” included celebrating on the star in Texas Stadium, signing a football with a sharpie (that was hidden inside his sock) after a touchdown on “Monday Night Football” and his infamous holdout/breakup from the Eagles in 2005.

Moss’ teammate for four seasons in Minnesota, Carter possessed arguably the greatest receiving hands in NFL history. An eight-time Pro Bowler, Carter led the NFL with 122 receptions in 1994 and in touchdown receptions on two separate occasions. His 130 career touchdowns are fourth all-time, while he is also sixth all-time with 1,101 receptions and 13th with 13,899 receiving yards.