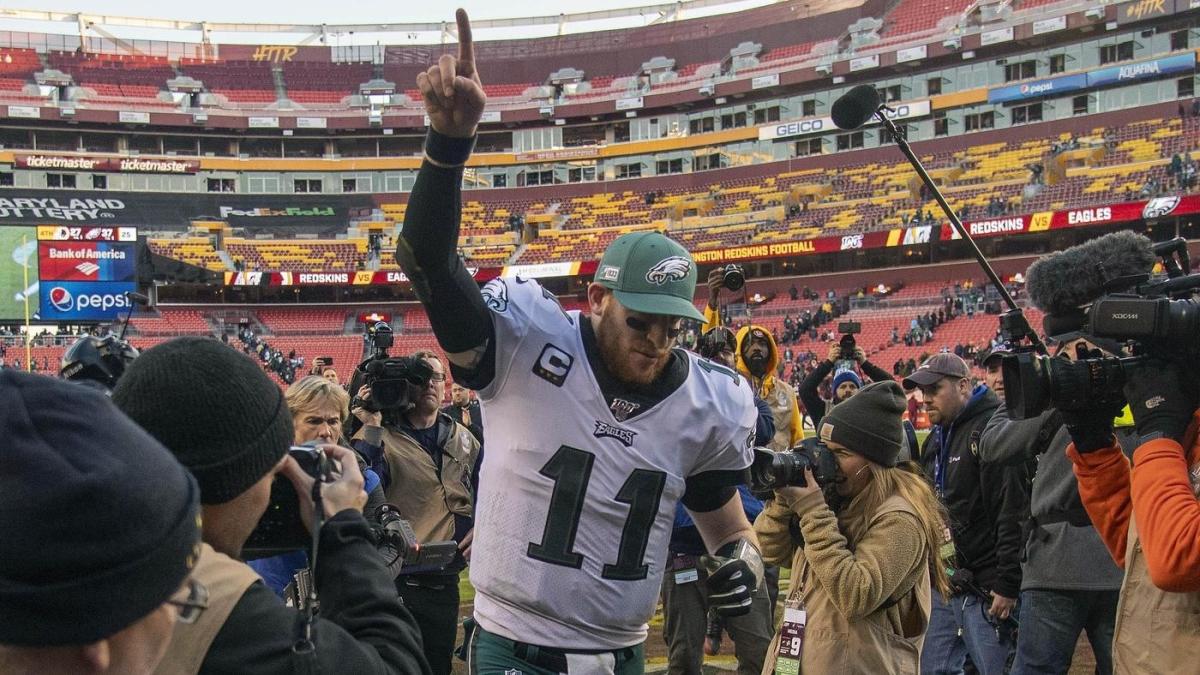 In Philadelphia, there are two ways to earn eternal love amongst the ever passionate Philadelphia Eagles fan base: Win a Super Bowl and defeat the Dallas Cowboys. Carson Wentz has technically accomplished one of those feats and the other one he hasn’t achieved nearly enough.

Wentz is part of a confusing chapter in Eagles’ history despite only making 54 starts in four seasons with the franchise. The driving force behind the Eagles Super Bowl season in 2017, Wentz was the front runner for league MVP when his season was cut short thanks to a torn ACL and LCL with the Eagles sitting at 11-2 and on their way toward the top seed in the NFC. Nick Foles was able to clinch home-field advantage for the Eagles and went on to have a postseason for the ages in winning Super Bowl MVP honors and giving Philadelphia its first championship since 1960.

Wentz, the starting pitcher of that 2017 season, was standing on the sidelines while Foles closed it out and made history.

Wentz has beaten Dallas twice in six meetings. His two wins aren’t ones to brag about. One came in Week 17 of the 2016 season where Dallas rested their starters after clinching home-field advantage and the Eagles were eliminated from playoff contention. The other was in Week 11 of the 2017 season when Ezekiel Elliott was suspended six games and the Eagles cruised to a 37-9 victory over a broken Cowboys team.

Wentz lost both games to the Cowboys last season — both times when first place in the NFC East was at stake. The Eagles lost by a touchdown in Week 10 in Philadelphia as Wentz failed to bring them back down seven points with 3:19 left and the second meeting was a 29-23 overtime loss, a fourth-quarter comeback by Wentz — he failed to get the ball in the extra session. After the loss, Wentz was out for the season with a broken bone in his back, leaving Foles to rally the Eagles to the playoffs and a playoff win in the wild-card round.

Ten months removed from the Foles chapter in Philadelphia, Wentz is still batting the portion of the fan base that believes Foles should be the quarterback of the franchise. The ghosts of Foles aren’t haunting Wentz, who has 95 touchdowns to just 35 interceptions in his four years with the Eagles, compiling a 92.4 passer rating and a 30-24 record.

Not included in those stats are a signature win in late December and January, something that has eluded Wentz the past two years thanks to various injuries. Wentz’s biggest win as the Eagles quarterback was a game he didn’t even finish, a 43-35 win over the Los Angeles Rams in Week 14 of the 2017 season. He threw four touchdown passes in three quarters before his knee injury.

Some Eagles fans forget that performance by Wentz, instead choosing to remember both of his defeats to Dallas the year after the Eagles won the Super Bowl. Wentz has actually performed very well in his six games against the Cowboys, completing 66.5 percent of his passes for 1,394 yards, 11 touchdowns and two interceptions for a 97.7 passer rating. Wentz’s downfall against Dallas has been the five fumbles he has against them — the most against any opponent. That’s part of a bigger problem revolving around Wentz’s game — he has 46 fumbles in 54 career games.

Wentz didn’t help his case to win over his haters in a 37-10 loss to the Cowboys in Week 7, completing 61.4 percent of his passes for 191 yards with a touchdown, interception, and two fumbles. In case anyone is keeping track, that’s three consecutive losses to Dallas and Wentz started every one of them.

Wentz may not be able to win a Super Bowl this season, but will certainly earn the opportunity to play for one if he can beat the Cowboys Sunday. Once again, the Eagles quarterback will be facing the Cowboys with first place in the NFC East on the line. The stakes are much bigger this time as the winner of this one gets the division crown. The Eagles need to beat Dallas as a Cowboys victory will seal the division title. An Eagles win won’t clinch the division, but they can accomplish that feat next week against a three-win New York Giants team.

It won’t be an easy task. Wentz has been playing five weeks without No. 1 running back Jordan Howard and will be without starting wide receivers Alshon Jeffery, DeSean Jackson and Nelson Agholor at the skill positions. Right tackle Lane Johnson also looks to be unavailable for Sunday’s game as he’s battling a high ankle sprain. Wentz will be going into this game with Greg Ward (18 career catches), JJ Arcega-Whiteside (eight career catches) and Robert Davis (one career catch) as his starting wide receivers and standout rookie Miles Sanders as his starting running back with Boston Scott (39 career carries) as the change-of-pace back.

Through all this, Wentz has led the Eagles to fourth-quarter comeback victories over the Giants and Washington Redskins to get the Eagles in position to square off against Dallas for the division title. Beating the Cowboys is a much different story and one Wentz can write himself in what is the biggest game of his career to date.

Dick Vermeil became a legend in Philadelphia by beating the Cowboys in the 1980 NFC Championship Game. Wilbert Montgomery became part of that legend with his 42-yard touchdown run on the Eagles’ second offensive play, paving the way toward that victory. Buddy Ryan humiliated the Cowboys on a regular basis, beating them seven consecutive times, while Andy Reid and Donovan McNabb made a habit beating them in the early 2000s. McNabb’s legacy was altered by losing his final three games against the Cowboys in an Eagles uniform, including the 2009 wild-card round.

Beating the Cowboys in big games is part of winning the Eagles fan base over. Wentz can establish his own legacy by beating Dallas Sunday, with all the odds stacked against him. A win against the Cowboys, with the Eagles being home underdogs no less, would be talked about in Philadelphia for years to come. It would eliminate all the doubters that don’t believe Wentz is the team’s franchise quarterback.