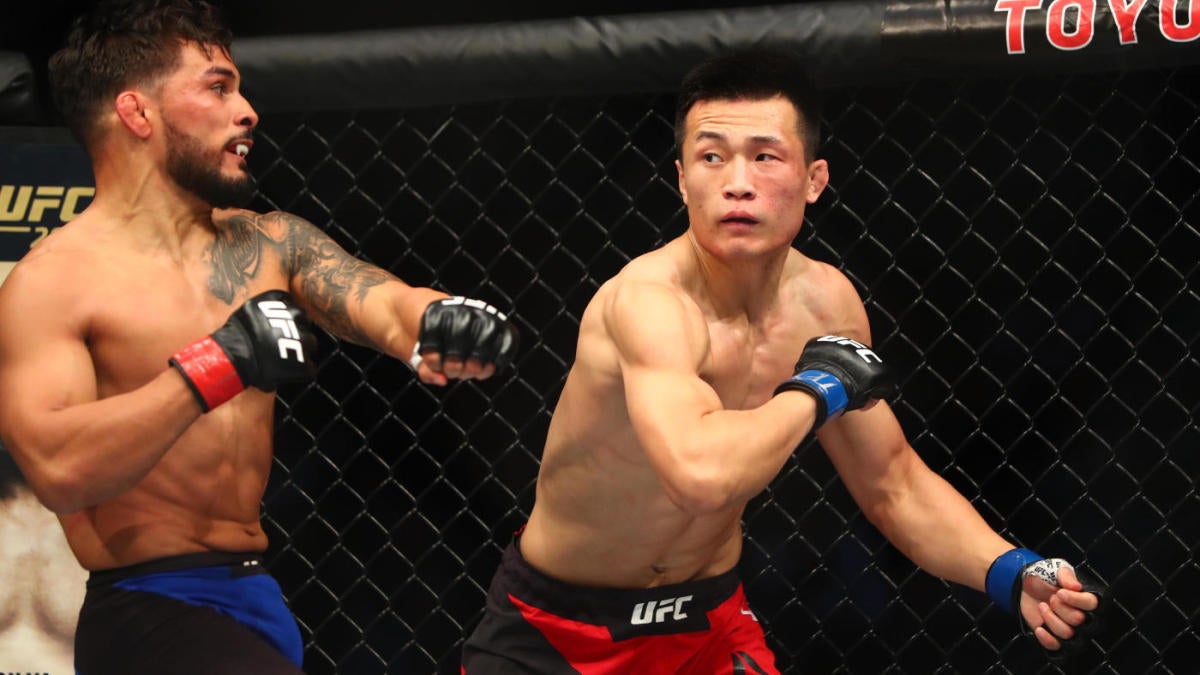 Chan Sung Jung, perhaps better known in MMA circles by his nickname, “The Korean Zombie,” will get a chance to fight in front of his home-country fans on Saturday in the main event of UFC Fight Night 165. Jung, the No. 6-ranked featherweight, takes on fourth-ranked Frankie Edgar to top the 13-bout UFC Fight Night 165 card at Sajik Arena in Busan, South Korea. The main card is set for 5 a.m. ET, with preliminary bouts scheduled for 2 a.m. ET.

Jung (15-5) has moved up the ranks by winning two of his past three fights following his return from a layoff of more than three years. He faces a tough opponent in Edgar (22-7-1), the decorated UFC veteran whose last fight was a loss to former champ Max Holloway in a title bout.

Jung is a -185 favorite (risk $185 to win $100), while Edgar is a +160 underdog in the latest Edgar vs. Jung odds. In the co-main event, Aleksandar Rasic (-150) meets Volkan Oezdemir (+130) in a light heavyweight clash. Before making any UFC Fight Night 165 picks of your own, make sure you hear what SportsLine MMA expert Kyle Marley has to say.

Marley won the first-ever “ToutMaster” UFC betting contest sponsored by MMAOddsBreaker and is in contention to win this year’s contest. He also appears regularly on multiple MMA betting and DFS shows. Over the past year, $100 bettors who have followed Marley’s UFC picks are up more than $19,000.

Just last week at UFC 245, Marley told SportsLine members that welterweight champ Kamaru Usman (-175) would successfully defend his belt against Colby Covington (+155) in their much-anticipated main event. He reasoned that Usman’s edge in boxing and power would be the difference, and was proven correct when the champ used a fifth-round flurry to stun Covington and finish him by technical knockout. Anyone who has followed Marley’s advice is way up.

Now, with UFC Fight Night 165 fast approaching, Marley has carefully studied every matchup on the card, identified the best value in the UFC odds and released his MMA picks for every single fight. He’s sharing those selections only over at SportsLine.

Marley knows Jung must take advantage of this opportunity in front of his adoring fans if he intends to become a potential title challenger to new champion Alexander Volkanovski, who upset Holloway at UFC 245.

The 32-year-old Jung has long been a fan favorite and his nickname stems from an uncanny ability to walk through serious damage and continue fighting. He took a leave of absence from the sport following a 2013 title-bout loss to Jose Aldo, but has a win over former interim lightweight champion Dustin Poirier to his credit. The lone defeat since his return came at 4:59 in the fifth round on an elbow from Yair Rodriguez in a bout Jung had dominated. It was the latest stoppage in UFC history.

The 38-year-old Edgar could be at a crossroads in his career. The former lightweight champion has lost two of his past four bouts and was training for a move down to bantamweight before agreeing to be a late-replacement opponent in this fight. Edgar steps in for second-ranked Brian Ortega, who withdrew because of a knee injury. See all of Marley’s UFC Fight Night 165 picks right now.

We’ll share one of Marley’s UFC Fight Night 165 predictions here: He is backing Jun Yong Park (+105) to defeat Marc-Andre Barriault (-125) in a middleweight clash on the main card. Park (10-4) saw a seven-fight win streak snapped with a loss in his UFC debut in August. He was submitted by Anthony Hernandez in the second round. He hopes to bounce back against Barriault (11-3), who has been on the wrong end of two consecutive decisions. He lost by split decision to Krzysztof Jotko in July.

“Park is going to have an edge on his feet with his boxing, and he will have the home-crowd advantage as well,” Marley told SportsLine.

Marley also has strong picks for Edgar vs. Sung Jung, Rakic vs. Oezdemir and every other bout on the UFC Fight Night 165 card. He’s only sharing at SportsLine.

Who wins Edgar vs. Jung? And how exactly does each fight end? Visit SportsLine now to get detailed picks on every fight at UFC Fight Night 165, all from the expert who’s up more than $19,000 on MMA in the past year, and find out.